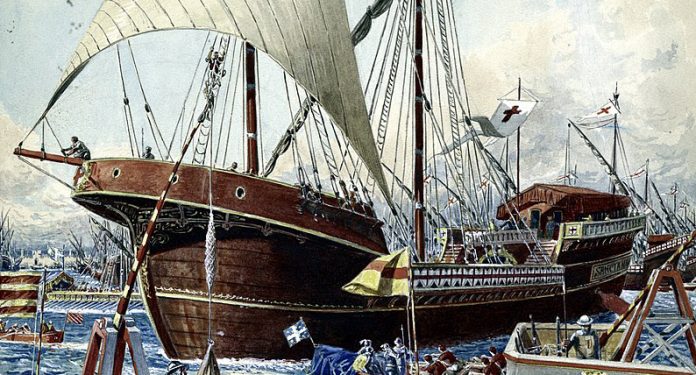 BY the middle of the 13th Century, bankers who remained sedentary became common and had greater resources than the travelling merchants.

They dispatched networks of agents to fairs and other commercial meetings.

During this period, merchants, their agents and the bankers also became more versatile.

One such entrepreneur, Symon de Gualterio of Genoa, left records indicating his investments and loans in addition to purchases and sales of cloth, silk and saffron.

Wool was among his more important merchandises.

His agents bartered for spices in the East, which he sold throughout Europe.

Often the purchases were made on credit, with the provision to pay within a specified period of time.

If all went well, de Gualterio made large profits without risking his capital.

His records show he purchased 30 pieces of English woolen cloth in March 1253, for payment in mid-July, by which time he would have sold the cloth at a fair in May. That March, he acquired a three-quarter interest in a ship which he used in the northern trade, and during the same month, de Gualterio arranged for the procurement of a large quantity of silk and saffron for sale at one of the Champagne-area fairs.

During his career, wool remained key to de Gualterio’s fortunes, and wool was one of the major trade goods throughout Europe.

Parliament asserted in 1297, that wool represented half of England’s wealth, and others called it the ‘jewel of the realm’ – (sacks of wool served as currency).

In 1273, the value of wool exported from England came to more than $30 million (in current prices), and fetched $600 000 in taxes for King Edward I, whose foreign adventures were financed by wool, and taxes and loans on wool paid for much of the Hundred Years’ War.

When Richard the Lion Heart was captured by the German emperor, his ransom was 50 000 sacks of wool, an enormous amount at the time.

Taxes on and sales of Spanish merino wool later provided, among other things, the funding for the voyages of Columbus.

At about the same time that de Gualterio was making his fortune from wool and other trade commodities, Orlando and Bonifazio Bounsignori, two Sienese bankers who began as merchants, graduated into money-lending and pawn broking, before branching out into other forms of banking, established themselves as bankers to the Church.

The popes of this period had many sources of income, and required the services of professionals to collect funds, advance them funds when necessary, and provide investment advice.

Unfortunately, in the early 14th Century, the two Bounsignori made imprudent investments with their own funds and despite a bailout from Pope Boniface VIII, their bank failed.

Several of their agents fled the country and King Philip seized their properties and those of other Sienese merchants.

Pope Clement V did the same in Siena and the city fell into an economic slump.

Other monarchs, nobles and churchmen also followed this pattern.

The practice of bankers providing the financial muscle for political leaders’ wars and expeditions did not originate in the Middle Ages – it was present during ancient times. But the medieval configuration was closer to that of modern times than one might imagine.

In this period, scholars made distinctions between two different kinds of trade – i.e.: regular and privileged.

The former was subject to rules, regulations and taxes levied by both the importing and exporting political authorities.

These taxes constituted an important source of revenue for the monarchs and the nobles who were able to levy them.

Privileged trade occurred when one city was given special concessions in a Moslem or Byzantine city in return for payment to a ruler.

Granting privileged trade rights usually occurred when the monarch needed immediate funds and could not wait for tax collections, or when he wanted to reward a favoured banker or courtier.

Venice for example, obtained such rights in Sidon in 1102 and in Tyre in 1123, followed by other cities.

By the early 11th Century, Europe was showing signs of economic life.

Byzantine, Moslem, and pirate vessels were being routed from the Mediterranean.

In 1087, Genoese and Pisan ships raided the Moslem port of Mahdia in northern Africa.

The Normans recaptured Sicily from the Moslems in 1090.

Corsica was taken the following year, thus opening the Straits of Messina and the entire central Mediterranean to European shipping.

The Seljuk Turks were being contained by the Byzantines.

Castile was on the march in Spain.

The mining of gold and silver was expanded in Central Europe and the population was increasing; partly the result of larger harvests and a generally higher standard of living.

With the growth of maritime commerce also came a quickening of internal trade reflected in the growth of merchant fairs, which were increasing in number, size and duration.

Fairs, however, were quite different from markets which were regularly scheduled events, in which customers came to buy and merchants to trade and sell.

These fairs which became a feature of late medieval life were sponsored by political authorities and were seasonal, rather than weekly, geared to wholesale rather than retail customers and served a wider and broader population.

Once a year, merchants and customers would gather at a specified locale, such as Paris, Geneva, London, Reims, Bruges, Frankfort and other central places, to buy, sell and exchange information and ideas.

The most famous of these, was held in Champagne, south-east of Paris, each January, lasted six weeks and attracted merchants and customers from all over Europe and beyond.

Other towns in the area also had fairs, carefully timed not conflict with one another, allowing merchants to move from one fair to the other over a period of several months, trading cloth, textiles, leather, furs, spices, dyes, etc., generally followed by other smaller goods.

At the end of the fairs, those involved would have two-or-three weeks to settle accounts.

The local noble who organised the fair would dispatch his knights to the fairgrounds to help police the transactions and settle any disputes through arbitration or mediation.

If this failed, there would be recourse to commercial courts, also controlled by the noble.

Potential purchasers would visit stalls tended by merchants exhibiting their wares and enter into contracts. Much like a modern-day convention, they also exchanged news, bandied ideas, and became better informed on a wide variety of subjects besides business.

After all, the machinations of political and religious leaders, happenings abroad and new technologies were important to merchants, bankers and producers then as much as today.