Home Feature Money and the pursuit of wealth: Part 15 …from landholding to commerce 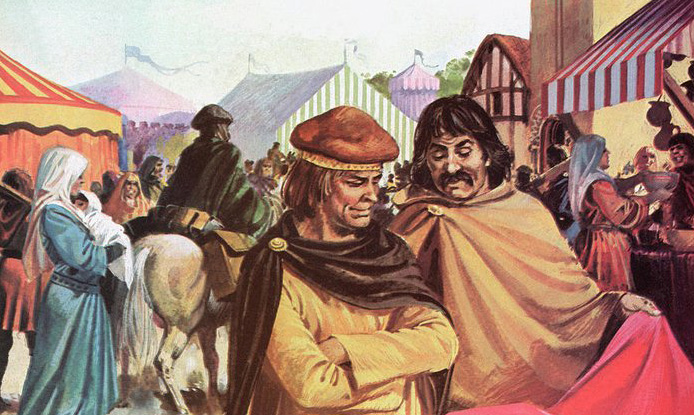 FAIRS were bound by rules and regulations.

At the time of the Paris Fair, held in honour of St Denis, local merchants had to close their shops and open stalls at the fair grounds while the privileged paid a fee to the king, who used the money to defray expenses.

When the kings of France took over management of the fairs, they raised tents and charged high taxes which discouraged the wholesale merchants from attending.

As trade spread, there was less need for the fairs and their popularity declined.

Concomitant with the popularity of fairs was the growth of town life.

In towns, trade also grew, but with a difference.

Wholesale merchants would sell goods purchased at the fairs to retailers.

In most jurisdictions, the wholesalers were forbidden to sell at retail.

Consequently, the following was found in the Charter of the City of London: “And after he has entered the city, let the foreign merchant be lodged wherever it please him. But if he bring dyed cloth, let him see to it that he does not sell his merchandise at retail, but that he sell not less than a dozen pieces at a time.

This Charter was not unique.

Nonetheless, the fairs and the towns were rival forms of commerce.

In time, the towns developed shopping and business sections, some of which were retail while others were wholesale; they came to resemble permanent fairs and were perceived as such.

In the late 12th Century, Chretien of Troyes wrote: “One might well believe that in a city a fair is being held every day.”

And others noted that commerce worked its way much more smoothly in shopping districts than at the fairs.

In all of this, a commercial nexus was becoming more important in the everyday lives of many people.

Most Europeans remained bound to the land, until well into the 19th Century.

But, beginning in the 12th Century, economic power shifted from landholding to commerce, though this was not evident for several centuries.

The proliferation of cathedral construction that began in the early 11th Century, lasting for more than 300 years, was another sign of recovery which also enhanced the power and prestige of the towns.

Labourers worked on a cathedral for generations, even centuries, with the same ardor that the Egyptians displayed in constructing the pyramids — with devotion, and also out of a sense of security.

It can be argued that such enterprises did not represent a part of the search for wealth and fortune, or lead Europeans to look beyond the horizon for challenges.

Yet they were, and they did.

These edifices might appear, to the present-day secular mindset, expensive, extravagant and uneconomical — but they were far more than that.

Towns vied with one another to erect the largest, most splendid edifice, with the finest interior and the highest spires—the height of the spire being considered a measure of a town’s wealth. They were not only sources of self-respect and looked upon as part of the community’s wealth, but also could be the focus of pilgrimages, thereby bringing in the medieval equivalent of tourist trade.

Construction funds for these edifices came from several sources.

The contributions accumulated by the episcopal Sees were important.

A miracle occurring at or near the site often resulted in a surge of contributions.

All involved took pride in having so magnificent an edifice to show off and in which to worship. For individuals such as these, cathedrals were a form of wealth.

While religion played an important role in the somnolent nature of economic life in the half millennium following the fall of Rome, it was also a major factor in bringing the early Middle Ages to a close.

In 1070, as the European recovery quickened, the Turks seized Jerusalem.

Europeans returning home from pilgrimages told stories of the desecration of holy places and persecutions.

Tradition has it that one of them, Peter the Hermit, wrote a letter to Pope Urban II in 1088 detailing these horrors and asking for assistance.

A corollary problem was the progressive weakening of the Byzantine Empire which was also being threatened by the Turks.

While the Roman Church and the Orthodox Church in Constantinople were not on particularly good terms, they were both Christian and this threat from Islam bothered the Pope and other European leaders.

After outlining the outrages visited upon Christians in the Middle East, he appealed to the desire for wealth harboured by his listeners, something the Church had taught was ungodly but which persisted nonetheless.

Moreover, at the end of his address, the Pope indicated that those who went on the crusade not only would benefit economically but would also receive salvation: “Let none of your possessions keep you back, nor anxiety for family affairs. For this land which you now inhabit, shut in on all sides by the sea and the mountain peaks, is too narrow for your large population; it scarcely furnishes food enough for its cultivators. Hence it is that you murder and devour one another, that you wage wars, and that many among you perish in civil strife. Let hatred, therefore, depart among you; let your quarrels end. Enter upon the road to the Holy Sepulcher; wrest that land from a wicked race, and subject it to yourselves. Jerusalem is a land fruitful above all others, a paradise of delights. That royal city, situated at the center of the earth, implores you to come to her aid. Undertake this journey eagerly for the remission of your sins, and be assured of the reward of imperishable glory in the Kingdom of Heaven….(sic)”

Dr Michelina Andreucci is a Zimbabwean-Italian researcher, industrial design consultant and is a published author in her field. For comments e-mail: linamanucci@gmail.com