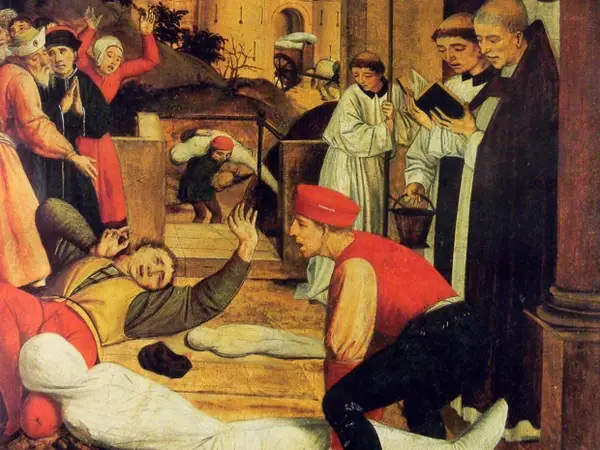 THE 14th Century was a period of turmoil during which time many of the economic and financial gains of the 13th Century faded.

This was the time of the Hundred Years’ War between France and England, among many other, smaller conflicts.

It was also the time that the Black Death (the Bubonic Plague) appeared; first in Sicily in 1347, and then spread northward. It took more than a third of Europe’s population in less than five years and would recur sporadically thereafter, leading to labour shortages. Inflation, which accelerated in the 13th Century, rose even more in the 14th Century, driving up prices and causing great distress among the people.

Even the climate conspired against the continent. Abnormally heavy rains ruined crops and caused grain prices to rise even more sharply in poor harvest years.

At one point, as a result of two consecutive bad crop years, the price of grain in England shot up 800 percent.

The so-called ‘little Ice Age’, which lasted until the 18th Century, caused the Baltic to freeze over and wiped out agriculture and settlements in northern Europe and Greenland.

At Avignon, the pursuit of wealth was stronger than it had been in the Mediterranean during the previous century. The popes of this period sold offices, indulgences, remission of sin — anything that would bring in funds for the Papal entourage.

In the 1340s, when high Church officials, seated in ornate rooms in splendid palaces, were served meals on gold plates, Petrarch wrote: “I am living in the Babylon of the West,”

They rode on horses “…decked in gold, fed on gold, soon to be shod in gold if the Lord does not check this slavish luxury.”

In 1378, conditions worsened when a disputed election resulted in the creation of two Popes, one in Avignon and the other residing in Rome. This situation lasted until 1417, during which period the prestige of the Papacy fell to a new low.

The 13th Century also saw growing political power for the middle class. Rulers would ask their legislatures — relatively new to the scene but growing in power — to provide funds, usually through taxes, while the legislatures frequently responded by demanding more rights.

In 1344, King Edward III asked the English Parliament for funds. The response was legislation requiring landholders to serve in the army or provide substitutes or funds based on their wealth. But there was also insistence that the King grant Parliament further rights.

In France, the Estates General provided funds on condition that it be given new powers. Thus, wars often prompted the granting of additional rights to the emerging middle class.

Three elements combined to empower the middle class: the revival of commerce, in which they participated; the reappearance of a money economy, which greatly lowered transaction costs; and the growth of urban centres, where merchants and artisans could specialise in their trades and crafts, engage in commerce and purchase their food, clothing and shelter with profits and earnings.

The growth of towns made the fairs redundant. These ‘artificial towns’ declined and then disappeared as permanent towns became ever more important.

Artisans had existed throughout the Middle Ages, but most worked for their lords, to whom they had an obligation. Some of them were able to purchase their freedom, whereas others simply abandoned their posts, fled to the towns and attempted to set themselves up as independent contractors. At first, the nobles were wary of such developments, but by the 11th Century, they became aware of the possibility of taxing them and actually tried to attract artisans to their towns.

Town charters proclaimed the rights and obligations of the townspeople, such as taxes, rents and other charges, as well as the limits of their freedom. Many charters permitted artisans to organise guilds, the precursors of craft unions. The guilds had specified rules, regulations and rights as well as leaders to enforce them. The guilds often achieved their status through grants from rulers, who would receive payment for the privilege.

Imports into the town had to be sold to guild members or else bear a heavy tariff.

Guilds provided protections and benefits for their members. How one progressed from apprentice to journeyman to master was determined by the guilds, which also ran schools to train the sons of members.

Guilds also secured monopolies of their towns’ businesses.  Initially, many guilds had, as members, both merchants and artisans, but over time, the differences in their interests caused them to separate. For example, merchants who imported goods wanted to sell them for higher prices, while artisans, who were also consumers, favoured lower prices.

Thus, merchant and artisan guilds often were in conflict, specially since the merchants usually were town officials working hand in glove with the lords and the artisans were their subjects. More important, however, was what they had in common. Merchants and artisans literally were bourgeoisie (the very word means ‘men of the towns’), which were capitalistic outposts in the feudalistic world.

Below them were the unskilled workers and above them, in theory at least, were the nobles, princes and monarchs.

Unskilled workers had little hope of rising in a society in which wealthy merchants and united craft guilds (which barred them from entry) were gaining power. Some of the guilds were closed affairs, in which only relatives of members could hope to gain admission. Others, the less desirable trades, were more open

One of these was the barbers’ guild in Marseilles and the outlying district of Sestri, in which the term of indenture was only two years, quite short by the standards of the time, which usually required from four to seven years.

One of the apprenticeship contracts read: “April the thirteen, in the year of the Lord 1248, 1, William, barber of Sestri, in good faith and without equivocation, place myself in your service and engage myself to work for you, Armand the barber, making my home with you, for learning the art of craft of barbering for a period of two years, at the salary or wage of forty solidi in the money now current in Marseilles, promising to be faithful to you in all things, not to rob you, or take anything away from you, and not to leave you for a greater or less wage for any reason whatsoever, and to give you in good faith whatever money I am able to take, to tell you the truth, and to bear faith with you in all that I do. I also promise to reimburse you for all expenses you incur in my behalf; and I promise to do all the things by agreement, and under pledge of one hundred solidi in royal crowns, the pledge being forfeited when the agreement is broken. For greater security I swear upon the Holy Gospels, touching them with my hand. And I pledge all my goods, etc., and renounce the benefit of all laws, etc.”

The barber’s pledge or contract was much shorter: “And I, the said Armand, admit all the foregoing, and promise by this agreement to give to you, the said William, forty solidi every year as your wage, and to provide for you, in sickness or in health, food and clothing for two complete years. Pledging all my goods, etc., and renouncing the benefit of all laws, etc.”

Dr Michelina Andreucci is a Zimbabwean-Italian researcher, industrial design consultant and is a published author in her field.  For comments e-mail:  “mailto:linamanucci@gmail.com”