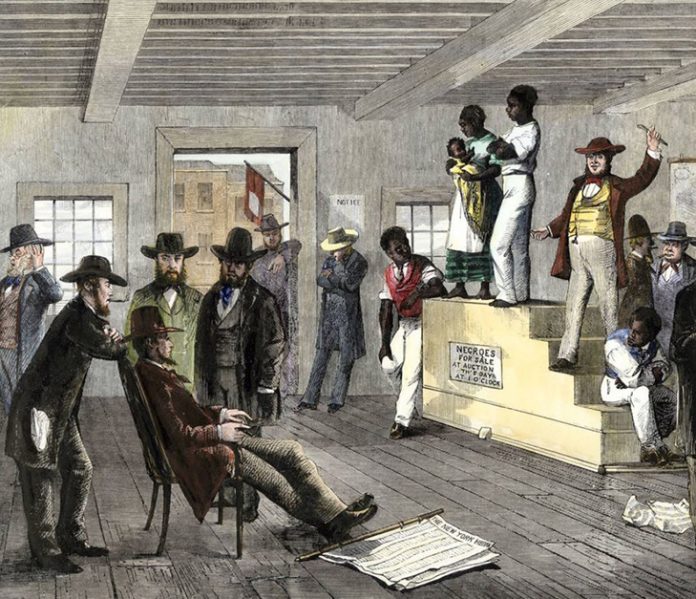 THE arrival of the slave trade altered the structure of tribal life in Africa.

Warfare became more prevalent since the booty of war included the ‘enemy people’, who could be sold into slavery for good prices.

Successful traders set themselves up as petty rulers, with some gaining substantial power.

The slavers soon learned of scores of other tribes and that they differed, often sharply, from one another.

For example, the Mandingos, who were generally docile, were much favoured, whereas the Coramantins were considered brutal, aggressive and difficult to bring to bear, and so fetched lower prices.

The ultimate purchasers in the Americas also learned the differences and in this period, at least, they counted for much. There were also preferences with regard to gender. Males sold for more than females.

Premiums were paid for light-skinned Africans and those with physical blemishes sold at discounts. Cripples and others with disabilities could be had for a fraction of the price of those sound of body.

Ghana was home to 36 of the 42 slave fortresses eventually erected in the region, and the vast majority of the Africans captured and dispatched to the ‘New World’ would end up in South and Central America and the Caribbean, with less than 10 percent going directly to what is now the US.

Some of the slaves taken to the West Indies were ultimately destined for the English mainland colonies. They would be ‘seasoned’ for about three months to take the rebelliousness out of them (literally tortured into submission) and then trans-shipped to the north.

The Spaniards had come to African slavery gradually. They first enslaved those who lived locally and forced them to work in the mines.

However, the natives knew the area, and with the aid of those who remained free, escaped whenever they could.  Thus, another source of labour was needed.

Some Europeans were lured to the New World, and European slaves were dispatched as well.

Indeed, the white slaves were preferred to the black ones, since the latter proved rebellious.

In 1503, the governor of Hispaniola asked Queen Isabella to put an end to the exportation of Africans to his colony, but due to the shortage of workers, he changed his mind in 1510.

Not only was there a need for slaves to work the mines, but sugar was becoming a big business and slaves were required to work in the fields and refineries as well as on the docks.

Soon after, an economic debate ensued that continued for close to three centuries.

In a letter to a colonial official, King Ferdinand professed an inability to “…understand why so many negroes die…,” which set off discussions on ‘tight’ and ‘loose’ shipments.

Those favouring tight shipments, meaning the slaves were stacked as closely as possible, noted that: “While some might die in the passage, enough lived to make this method preferable to the loose shipments, in which fewer perished, but the total cargo was less on arrival than the tight shipments.”

The King had reason to be interested in this matter since he collected a tax of two ducats for each slave sold, in addition to a stiff export tax.

As a result of these revenues, an active business in slave smuggling soon developed.

Other European countries were concerned with the slave trade as well.

There were French settlements in Canada, Guadeloupe and Martinique, while in 1671, the Danes took St. Thomas and there was the demand for Africans on these islands as well as in the Portuguese settlements.

However, they were not major players in this period.

The French became dominant in the Senegal area and the Danish West Indies Company, formed in 1625, had settlements on the Gold Coast and was followed there by the Swedish African Company.

The German Duchy of Courland had a presence in north-west Africa’s slave trade, and other German States made their bids for the trade.

These latter political entities had no need for slave labour, but entered the trade for profit.

It was estimated that each African sold in the Caribbean in the 18th Century returned a profit of 20 pounds to the investors.

While there are no reliable statistics on the slave trade, the conclusion set forth by many historians is that more than 15 million Africans were taken to the Americas between the 16th and the 19th centuries, with the most—some seven million — arriving in the 18th Century.

However, one historian believes the figure to have been as low as 3,5 million while another asserts it was 25 million.

Philip Curtin, who has devoted more time and energy to this subject than any other recent historian, estimated that the total slave imports into Spanish America came to around 1,5 million, with Cuba accounting for more than 700 000 of the total sums.

Most of the Africans taken to English settlements went to the Caribbean, not the US while close to twice as many Africans went to Jamaica alone than to all of North America.

The numbers question continues on, since ideology has taken on an important role in the debate.

Some African-American scholars argue for a total of 20 million.

Paul Lovejoy, writing in 1982, assented his belief that the total number coming ashore in the Americas was 9,8 million.

But did historians take into account those Africans who perished on the voyage.?

Although authoritative statistics for mortality are unavailable and are impossible to corroborate with any degree of accuracy, from contemporary accounts, the consensus is that about five percent of the slaves died in Africa after capture and on the way to the coast for shipment, another 13 percent in transit to the Americas, and close to a third of those in the West Indies died before being sent to their ultimate destinations working in the Southern tobacco fields and other occupations in North America.

One historian sets the loss of life during the maritime leg of the journey into slavery as high as 25-33 percent.

Although many of the trading records have been lost or destroyed, enough have survived to permit at least an estimate of the percentage of slaves who died during the rigorous ocean voyage: about 12 percent on French ships; 17 percent on Dutch and British ships; while Portuguese losses in the early centuries ran about 15 percent.

In the 19th Century when abolitionists forced the slave traders to take chances, the casualty rate rose to 25-30 percent.

Dr Michelina Andreucci is a Zimbabwean-Italian researcher, industrial design consultant and is a published author in her field. For views and comments, email: linamanucci@gmail.com