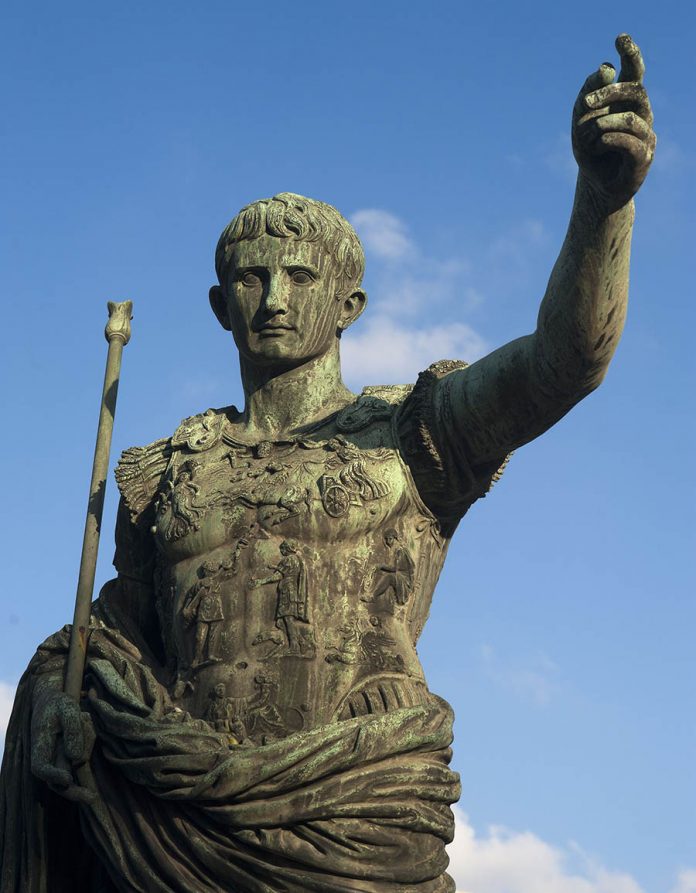 A GOVERNMENT that had arisen to administer a small city-State in central Italy now governed a vast empire.

Its blend of popular sovereignty, powerful elected administrators and an overarching council, the Senate, dominating the political scene through the prominence of its individual members and the prestige of the institution as a whole came to be tested in the new, wider world of empire.

The great wealth that accrued to the publicans, businessmen, bankers and other entrepreneurs created a powerful economic class that came to challenge the power of the Senate, most of whose members represented landed wealth.

Paradoxically, however, while the empire brought wealth to many, it brought poverty to even greater numbers.

It is not surprising, therefore, that the searchers for wealth in ancient times were motivated much the same way as modern-day seekers although their methods differed and their opportunities were more limited.

Italian agriculture had been based on the small farmer, but with the expansion of Roman power came the importation of foreign grain.

Grain produced in Sicily and Egypt could be imported into Italy and sold for less than what contemporary Italian farmers needed to break even.

The result was a consolidation of land into fewer and fewer hands and the migration of large segments of the rural population into the cities.

On the new estates, cash crops were cultivated most often, and instead of the free labour that had prevailed in early Italy, the new workforce was increasingly slaves.

During the late Roman Republic, slavery existed on a scale far greater than it had previously.

It is estimated that during his campaigns in the 1st Century BC, Julius Caesar enslaved more than one million people.

It was not unusual for private individuals to own thousands of slaves.

Estimates of the proportion of slaves to free range from one-fourth to one-third of Italy’s population.

Complicating the issue was the ease with which urban slaves gained their freedom, resulting in large numbers of free former slaves.

Though technically free, they were obliged to continue to serve the interests of their former owners.

While many urban slaves laboured on construction gangs, in factories and shops, most were employed in households.

A wealthy Roman would have slave gardeners, cooks, hairdressers, house cleaners, secretaries, launderers, tailors and childminders, among others, creating a wide distribution of slave ownership.

Even members of the lower-middle class owned a slave or two.

Although many slaves enjoyed good relations with their masters, Roman law was very clear that they were property (chattels), not persons.

Slaves had no rights during the republic.

They could be flogged, branded, mutilated or killed with impunity.

Besides being responsible for the explosion of slavery throughout Italy, foreign wars also gave rise to professional armies and unscrupulous commanders willing to use their troops to secure political advantage.

The combination of the demands of the powerful business and merchant class, the great poverty and desperation of large numbers of the Roman free population and professional armies more loyal to their generals than to the State gave rise to a series of civil wars.

Emerging as the ultimate victor was Gaius Julius Caesar Octavianus, or Augustus, who defeated his last rival in 31 BC and sealed his supremacy and that of his family.

This dynasty created a government known to history as the Roman Empire.

In its earliest stages, the Roman Empire was a hereditary military dictatorship with all the trappings of the old Republic.

The Senate continued to meet, and so did the assemblies for a time, while magistrates were elected, but the emperor controlled a growing bureaucracy and, of course, the armies.

With the end of the civil wars and peace along the frontiers, Augustus presided over a prosperous and serene empire.

With the Mediterranean serving as a great highway, trade moved freely throughout the Roman world — no pirates, no wars, just the Augustan peace!

Egypt, added to the empire by Augustus, exported grain, papyrus, linen and glass.

From outside the empire came slaves, hides, amber, spices and silk, while goods from beyond the empire were a component of its trade, the vast majority of commerce was internal. Foreign commerce represented a very small percentage, and its effects on the overall economy were minimal.

Beginning with Augustus, there were changes in the relationship between the State and private contractors.

The rapacity of many of the publicans had undermined confidence in this system.

Soon, imperial financial officials and procurators were handling taxation, the exploitation of natural resources, and the provision of supplies for the army and the civil service without recourse to private manufacturers.

Likewise, most mines came to be run by procurators and were staffed mostly by criminals and those with ‘hostile attitudes’.

In addition to their various official responsibilities, these agents of the emperor also served as his eyes and ears throughout the provinces.

Increasingly over time, under the direction of the imperial procurators, wealthy individuals in the cities of the empire were made responsible for collecting the tribute and arranging for its transport.

This practice of compulsory service of the wealthiest citizens – that is liturgies — was common in the Near East and with a number of Greek city-States as well, but during the empire, the Romans perfected it into an elaborate administrative system.

Indeed, much of the work previously done by the publicans came to be performed by municipal and provincial officials who carried out these duties without compensation.

Initially, civic loyalty and competition between prominent citizens kept the various positions filled, but by the end of the 1stCentury AD, it was becoming increasingly difficult to find individuals willing to take on the responsibilities and the costs.

With regard to tax collection, in addition to performing the work without pay, if the quota was not reached in actual collections, then it was the duty of the official to make up the difference.

Often, imperial administrators had to intervene and draft a candidate into service.

In the words of a late imperial commentator: “The main object of the system was to get public work done at private expense; in effect, it was a heavy tax on the moneyed classes and eventually brought them to ruin.”

Changes in the economic function of government from republic to empire were most notable in the grain trade.

As it had been since the beginning of commerce in Mesopotamia, grain was the principle item of trade. During the Republic, private individuals and companies collected the grain and private shippers transported it to its destination.

Few merchants in the Near East’s Fertile Crescent and in the Mediterranean cities of the Roman Empire knew of, and had contact with, counterparts in India and China at that time.

But by the 16th Century, however, the Portuguese, from a small base in Europe, created, controlled and administered a commercial empire that stretched from the Philippines to Brazil and to Africa, including Zimbabwe.

Would today’s talk of globalisation have surprised merchants and bankers who operated by that time?

Dr Michelina Andreucci is a Zimbabwean-Italian researcher, industrial design consultant and a published author in her field. For views and comments, email: linamanucci@gmail.com