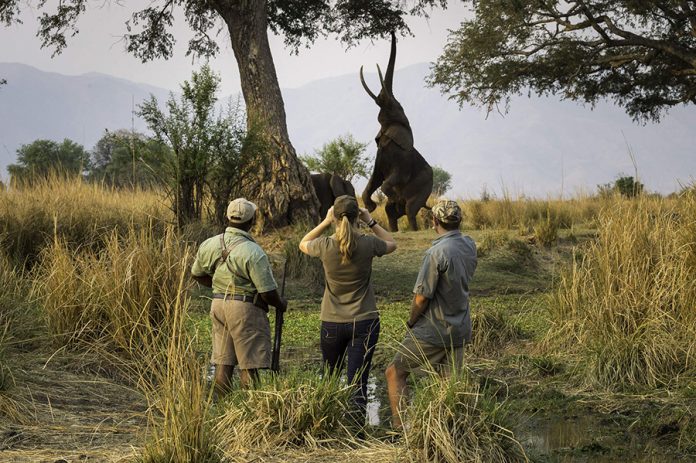 THEY bring international hunters and income to Africa.

Additionally, they contribute to wildlife management and conservation through acceptable hunting ethics.  They also use hunting income to pay for wildlife and habitat conservation.

Therefore, if professional hunters didn’t exist, it would have been a missed opportunity for both wildlife conservation and wildlife producer communities’ socio-economic well-being in Africa, including Namibia.

Yet, very little conservation credit seems to be given to the professional hunters’ role towards promoting wildlife conservation in Africa.

“Our intent is to ensure and promote ethical conduct, sustainable use of natural resources and to secure the industry for current and future generations.

“We are very optimistic about the future of hunting in our country because hunting is part of our existence and deeply entrenched in our value system, especially members of NAPHA who provide the highest standard of professional service to international hunting guests. “Our members are expected to hunt strictly in accordance with the ethical principles as stipulated in our hunting code.

“The professional hunters and their guests are encouraged to act responsibly towards nature, wildlife, and the local population.”

Namibia is one of the most sparsely populated countries in the world.

“Preserving wilderness and habitat is not only the obligation of our Government in national parks or communal conservancies,” said Cramer.

“Each farm on private land in Namibia plays a big and vital role by using conservation hunting as an alternative use where traditional agricultural activity is not sustainable anymore.

“Foreign income from hunters is a valuable contribution towards our Gross Domestic Product (GDP) and an employment multiplier in the informal sector.”

He said wildlife conservation hunting generates, “additional funding which we donate towards community projects and events.”

This is more than the country’s entire human population.

“Hunting in Namibia, especially on private land is the best way of protecting wildlife habitat on a large scale,” said Cramer.

“The other great thing about hunting on private land in Namibia is that it offers a diverse form of alternative land use as opposed to traditional agricultural activities. “In the past, very few animals occurred on farms around Namibia but with the expansion of the water infrastructure on farms and by transferring ownership of game to farmers, numbers started to increase.

“Today we have 60 percent more game than in the late 1950s as professional hunters started to pay landowners for hunted game and farms were converted to hunting areas or conservancies.

“This also incentivised farmers to re-introduce species back on their ground and conservation areas started to flourish.

“Sustainable hunting is the key to conservation and protecting wildlife and habitat in Africa.

“Only natural resources which are well looked after by hunters and conservationists will have a chance to survive in our country to the benefit of existing and future generations.”

Namibia’s official records show that the ‘biggest chunk of the money contributed through hunting concessions on state land goes into anti-poaching and rhino management, followed by protected areas and then human-wildlife conflict mitigation’.

“The NAPHA members have proven that hunting, through sustainable game utilisation ensures the protection of natural habitat and with this, its inhabitants, wildlife and local communities alike,” said Cramer.

Namibia offers areas that are completely unfenced, where game can roam freely.

Affectionately known as ‘The land of the brave’, Namibia is an attractive hunting destination with diverse landscapes where the game can be hunted in natural habitat; ranging from thick Kalahari sand to open or dense bush-veld, mountainous terrain, semi-desert and wetlands.

In a paper published in the 2018 World Conservation Bulletin, Jackson observes that Namibia had achieved lion conservation success.

“Namibia has an increasing, free-roaming lion population outside of its national parks,” he said.

“Today (in 2018), there are over 130 and increasing (NACSO – Namibia Association of CBNRM Support Organisations).

Meanwhile, NAPHA members are relieved with the recovery of international hunting from the COVID-19 international travel bans that almost collapsed the country’s hunting and photographic safari industries in 2020.

“With the ongoing and constantly changing rules and regulations pertaining to the COVID-19 pandemic, hunting has increased somewhat during 2021 and has to date shown some recovery which provided much desired relieve,” said Cramer.

A recent NAPHA survey showed that the number of international hunters was increasing and averaging at 5 000 annually, from 2016-2019.

Sadly, when COVID-19 hit the industry in 2020, the number of international hunters reduced drastically.

The 2021 hunting season has no doubt brought ‘a breath of fresh air’ and hope for NAPHA members because the number of international hunters hunting in Namibia is now increasing.

A total of 1 000 international hunters came to hunt in Namibia as of August 2021.

This was revealed in a NAPHA August 2021 survey.

The 2021 total number of international hunters is expected to increase significantly when that country’s hunting season ends on 30 November 2021.