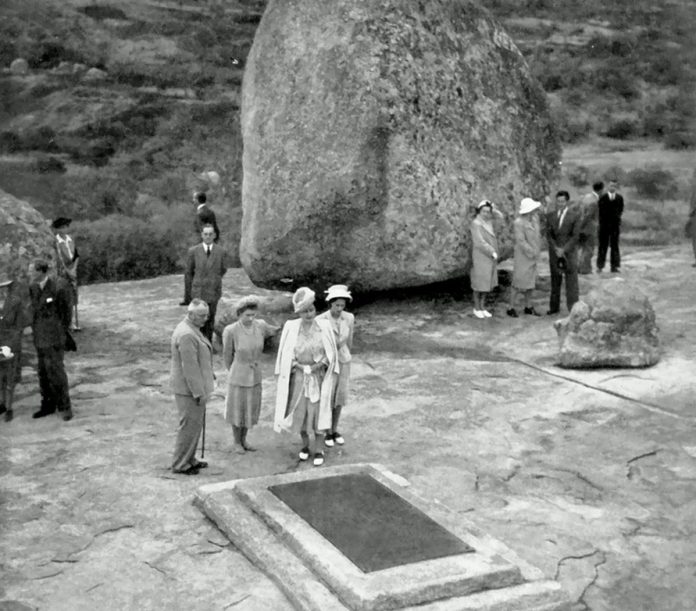 Granite stands for something that cannot easily pass away.

It is the stone from which Zimbabwe derives its name.

For that reason, Zimbabwe means ‘house of stone’ and, it is a name that comes with connotations of strength, solidity and durability – connotations that translate to permanence.

It stands for something that cannot easily be swept away

In that context, the idea of entombing a British homosexual in the sacred Matobo Hills granite was really an attempt at sealing a brutish hegemony into the permanence of Zimbabwe as a house of stone.

Visitors to the Matobo Hills did so to marvel at a hole hewn into the solidity and permanence of Zimbabwe as a house of stone.

It was an attempt to supplant the invisible ancestral Godfather Murenga with a novel architectural visibility sealing an obscenity.

And yet, they should have known better.

The First Chimurenga had abundantly made it clear that the permanence of Murenga (aka Mwari/Mlimo) was ironically ‘cast’ in his invisibility.

At the height of the First Chimurenga, colonial authorities had expressed surprise at how they had misread the indigenous community as having no central or ‘national’ authority.

“In July 1896 General Carrington, commander of the British forces operating against the Ndebele, gave his view of the Mwari cult.

‘The Mlimo is a Makalaka institution,’ he wrote, ‘which has been adopted with great fervor by the Matabele … For special occasions the people appear to travel enormous distances in order to consult the Mlimo and his orders fly about from one end of the country to another with great rapidity’.

This account, with its emphasis upon a single ‘Mlimo or high priest of Mwari and its notion of orders from this single authority being carried and obeyed everywhere, fairly represents the general white view in 1896 (sic).” (Ranger, 1967: 145)

The significance of the confounded British general’s observation (obviously informed by firsthand experience fighting Chimurenga forces) was that the permanency of the house of stone was not confined to rock.

The permanence was, in essence, a ubiquitous paradigm inclusive of the living and the dead – the physical and the spiritual.

Years later, the advent of the Second Chimurenga would influence historian Robert Blake (1977: 127-8) to dismiss, as fraudulent, the claim by American Scout F.R. Burnham and Native Commissioner Armstrong that they had shot the Mlimo in the First Chimurenga.

He noted that: “It was rather like a claim to have shot the Holy Ghost. What Burnham actually seems to have done was to have penetrated a cave, not in the Matopos at all but near Mangwe, and to have killed the leading priest of the only Mwari shrine that was hostile to the revolt.”

“The Mlimo is an invisible god … And the bottom line of what both were saying was that you cannot sneak up on, let alone shoot and kill ‘an invisible god’.”

Having established the foregoing, it is necessary to note that the significance or influence of ‘stone’ in the history of Zimbabwe went beyond granite.

The reader is reminded that the wealth the British homosexual Cecil John Rhodes invested in founding the commercial enterprise named ‘Rhodesia’ after him was derived from another African stone – the ‘bloodied diamonds of Kimberly’, South Africa.

It is also ‘incidentally’ important to note that the homosexual’s original idea had not been limited to Zimbabwe but at making the bloodied stones sponsor the occupation of the whole of Africa — from Cape to Cairo – an intention which, by that time, had already been scuppered by the 1884 Berlin Conference that laid down the rules for peace among European nations during their violent occupation of Africa.

In the distant future, the same diamonds, in ‘alluvial’ proportions, would be discovered all over the ‘house of stone’ and be, once again, the cause of a more frenzied British bid to re-occupy Zimbabwe on the back of a puppet opposition (Morgan Tsvangirai’s MDC).

It is now necessary to repeat ‘again’ that the movement from Zimbabwe (house of stone) to the commercial enterprise known as Rhodesia became ‘essentially’ a paradigm shift destined to create the worldview discrepancies that have divided the nation right to this day.

Last week’s installment posited that the commercial enterprise known as Rhodesia could only succeed if implemented as a paradigm.

And, it indeed ‘succeeded’ as a paradigm; a paradigm now roundly misconstrued as the Rhodesian success story; the Rhodesian bread basket of Africa; the powerful Rhodesian dollar trading at par with the British sterling; the Rhodesian jewel that was ‘allegedly’ given to the late former President Robert Mugabe with the warning not to destroy it.

The paradigm ‘essentially’ reduced the blackman to British historian Toynbee’s definition of the word ‘native’.

“When we, Europeans, call people natives, we take away anything from them; anything that suggests that they are human beings.

They are to us like the forest which the Western man fells down.

Or, the big game that he shoots down. They have no tenure of land. Their tenure of land is as precarious as that of the animals that they find.

What shall we, the lords of creation, the white people, do with the natives we find?

This is the definition that informed the paradigm shift from Zimbabwe to Rhodesia.

This is the worldview that created the ‘disaster’ presented as the Rhodesian success story.

Without it, Rhodesia would not have been the disaster coined the ‘jewel’ that was given to President Mugabe with the warning not to destroy it.

There would be no super-profits to reap from free labour.

There would be no laws to funnel African labour into European farms and industries.

There would be no laws to exclude Africans from the franchise that determined their role in the commercial enterprise known as Rhodesia.

There would be no laws to make Africans a guaranteed market for European goods.