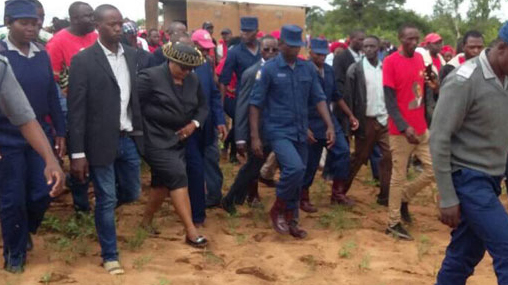 TO say the least, the MDC had been born on the wrong side of African history, particularly the history of that part of Africa that had been de-colonised by protracted armed struggle.

The structural and ideological weaknesses that had already manifested as intra-party violence had matured into the 2005 MDC split into MDC T and MDC N which, in essence, was a distillation of the regime-change outfit into hostile regions and tribes ironically championed by Coltart-Catholic conspiracy.

The tragic irony of the MDC split is that it is one weapon the Coltart-Catholic conspiracy had aimed at ZANU PF and it calls attention to how Christians like to wear paraphernalia that reads: No weapon fashioned against me shall prosper.

And in this case, the weapon fashioned against ZANU PF had ironically destroyed the MDC.

The chauvinism, tribal taunts and violence unleashed against MDC T vice-president, Thokozani Khupe, at Tsvangirai’s funeral shows how deep and self-hurting the Coltart-Catholic miscalculation turned out to be.

The MDC split was obviously one the Rhodesian and Western handlers had not anticipated and, apparently, had no control over.

It had left the handlers with no choice but ‘to appear to split too’ because both regime-change outfits apparently still needed massive hand-holding and the risk could not be taken to leave either outfit to its own devices.

MDC T was the bigger of the two factions and retained Eddie Cross and Roy Bennett whose proficiency in Shona camouflaged much of the evil in him.

Coltart was assigned the smaller faction which, though surnamed Ncube, had Mutambara imposed as leader.

The idea was to manage both the tribal and racial factors.

The Western handlers of the two MDCs had managed to extend their foothold from an Achilles heel in parliamentary law-making proceedings to a real spanner in the executive works.

They were now included in Cabinet meetings and became a party to the executive decisions they had, until then, been excluded from.

Even that inclusion in Government, right down to their being the Economic Ministerial authority, would not bear upon them the moral guilt or obligation to condemn the illegal sanctions they had championed for the purported reason that they had been excluded from Government.

While they had free rein to travel around the globe defaming Zimbabwe, their partners in Government remained under restricted travel conditions which curtailed the UN constitutional sovereign right to tell the world Zimbabwe’s other story.

The choice of Rhodesian handlers by both MDC factions among their limited Ministerial allocations exposed that they were indeed a Rhodesian project. President Mugabe successfully excluded Roy Bennet from his cabinet but remained saddled with Coltart as Minister of Education, Sports and Culture.

The racist did not miss the opportunity for political mileage.

Every textbook brought in by the UNICEF project, apparently responding to the Minister’s skin colour, was surreptitiously prefaced to remind the student that it was a donation from listed countries.

And the listed countries were the very same ones that had imposed illegal economic sanctions on Zimbabwe.

Nonetheless, the dollarisation of the economy by the then Minister of Finance, Patrick Chinamasa, ahead of the GNU had the effect of bringing some very welcome respite to the battered citizenry.

Biti, and a large section of a nation without memory has believed it, notwithstanding that the facts on the ground contradict the claim.

The ZANU PF landslide victory in the 2013 harmonised elections that ended the GNU does not validate Biti’s claim.

The citizenry that no longer felt under pressure of sanctions voted with their minds and not stomachs and it is faith in the legacy of the liberation struggle that won the day.

In essence, the MDC turned out to be an omnibus of exclusive interests. Each interest group would break away once its interest distilled. In that regard, the contingency also carried the weakness.

The resounding ZANU PF win removed the opposition from the Cabinet.

The co-Ministerial posts and the posts of Prime Minister and two Deputy Premiers that had been created to accommodate them were scrapped but the woes were far from over.

The opposition leadership flew to their handlers in London and Washington and lobbied for tougher sanctions.