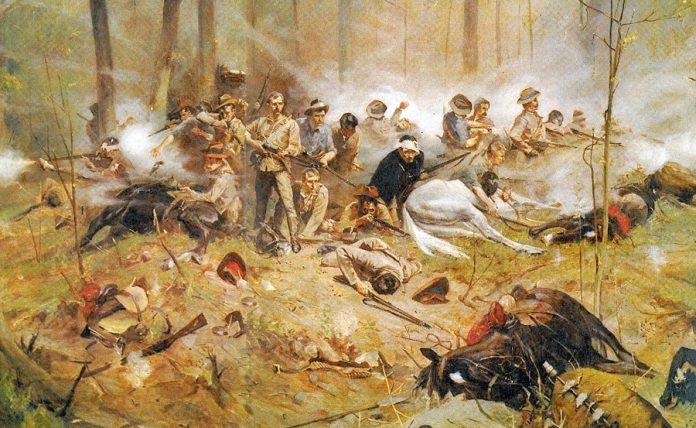 THE first ‘Patriotic Front’ lasted only a few bloody months.

The enemy was quick to realise and exploit fundamental differences in motivation and commitment to fighting which translated to critical points of weakness in the Shona/Ndebele alliance or ‘Patriotic Front’.

At the bottom of the common grievances driving the war, the regimented Ndebele wanted a restoration of their kingdom which the white settlers had destroyed.

The implications of such an outcome would obviously be ominous to the Amahole, the Shona victims of traditional Ndebele raids.

No one needs to be persuaded to accept that once a caste system is dismantled, the natural thing for the downtrodden in that system is to loathe its restoration.

On the other hand, a section of the Shona resistance also wanted a restoration of the Rozvi Kingdom which the Nguni (inclusive of Ndebele) had destroyed.

Such an outcome would also obviously be a challenge to the restoration of a rival Ndebele Kingdom in which they would the downtrodden caste.

Ironically, it is Ndebele regimentation and conventional type of fighting that made them easier to handle and hastened their defeat.

The fighting that had started on March 20 1896 ended with the first indaba in the Matopos on August 21 1896, exactly five months later.

The settler-forces identified Nyambezana, Mzilikazi’s queen and mother to Nyanda, one of the Ndebele commanders, and, through her, initiated peace negotiations. At that first indaba, Rhodes ‘conveniently’ allowed and encouraged the defeated commanders to blame the Shona as the troublemakers.

Somabulana was the Matabele spokesperson and his opening remarks disparaging the Shona registered tribal cracks surreptitiously promoted by the settler-forces ever since the Moffat Treaty, Rudd Concession and the 1893 Matabele war:

“The Amahole and the Mashona … what are they? Dogs!

But we the Amandabili, the sons of Kumalo, the Izulu, Children of the Stars; are no dogs!

You came, you conquered.

The strongest takes the land.

This was, of course, notwithstanding that the same ‘sons of Khumalo’ had been divided among themselves during the fighting.

Mtshana, Gampu and Ndiweni had defected and fought on the side of the settlers and were only included in the fourth indaba after their defeated kinsmen had been sufficiently bribed and tempers had sufficiently cooled down.

Mtshana had been supreme commander of Lobengula’s forces and was famed for creating the decoy that accounted for the 34-man Allan Wilson Patrol on December 4 1893.

Having been supreme commander of Lobengula’s forces, one can only imagine the value of the intelligence he had taken with him to the settler-forces for use against his own people.

The second indaba showed that the Zansi position was not shared by the so-called ‘dogs’ and ‘slaves’, one of whom defied the arms surrender and brought a weapon to the indaba.

The rebel represented the Shona/Amaholi component that was going against the Ndebele grain and refusing to disarm.

De Vere Stent, who was The Times correspondent at the August 28 1896 second indaba in the Matopos reported the defiance.

“There was a movement among the natives and a young chief who might best be described as insolent to the elders of his own tribe and particularly so to the whitemen put in a pertinent question. ‘Where are we to live when it’s over? The white man claims all the land’.

The young chief shouted angrily, ‘You will give us land in our own country!

Mr Rhodes complained that he could not talk to chiefs holding rifles; to which the young chief replied: ‘You will have to talk to me with my rifle in my hand. I find if I talk with my rifle in my hand, the whiteman pays more attention, to what I say. Once I put my rifle down, I am nothing; I am just a dog to be kicked’.”(Ranger, 1967:248)

Mkwati, Mtini and Makumbi were resolutely entrenched in the same position and destined to fight to the bitter end.

At least 40 Ndebele chiefs and commanders negotiated with Rhodes and kept their heads.

Out of that number, 10 chiefs were rewarded with ceremonial positions in the British South Africa Company Administration.

The other four were the collaborators who included Mtshana, Gampu and Ndiweni.

In the longer historical context, the fate of the Shona/Amaholi ‘troublemakers’ confirms Rhodes’ resolution to hammer a permanent tribal wage between the Shona and the Ndebele; a resolution to frustrate any future Patriotic Front.

Umlugulu, who became head induna of the Gwanda District, had been the Khumalo high priest who had worked hand-in-hand with Mkwati and guaranteed the Ndebele royal family’s involvement in the war.

When the time came, his spiritual equivalents in Mashonaland would be baptised and hanged.

Siginyamatshe was another Ndebele spirit medium who lived close to Bulawayo and worked closely with Mkwati. He did not surrender but was captured in the Filabusi District in October 1897.

While the judge who tried Siginyamatshe believed that if it had not been for his influence, many Ndebele people around Bulawayo would not have risen during the First Chimurenga, he still spared his life.(Ranger, 1967:p.157)

On the other hand, those with the same influence in Mashonaland would be executed.

Mpotshwana, the Nyamandhlovu regimental commander, also of Ndebele origin, was captured in July 1897.

Makumbi was overall commander of north and north-eastern Matebeleland which was predominantly Shona. He was captured and sentenced to death on August 19 1897.

Ntini, who was commander of the Ngnoba regiment, a predominantly Rozvi unit, was captured in May 1897 and hanged later that year.

He had defied Lobengula from the word go and never succumbed to the latter’s control.

Father-in-law to Mkwati, it is him who instigated the Shona people of the Midlands to rise against settler-rule. (Ranger, 1967:154)

When he was captured, he was court-martialled and shot on the spot as was done Chief Chingaira Makoni.

In essence, the differences in the treatment of Ndebele and Shona leaders of the resistance became a wedge of death for the first Patriotic Front formation.