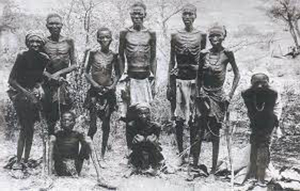 BRITISH colonial governments across the world felt it their patriotic obligation to contribute forces to defend the British Empire from German Nazism which postulated not just the white supremacy already flaunted by all European imperialism but actively believed in German supremacy over all races.

They called themselves the Aryan race.

The first genocide (estimated over 100 000) of the 20th Century had been a crime of racial hate committed by the same Germans in that pursuit.

Between 1904 and 1908, the Herero, Nama and San natives of South West Africa (Namibia) were massacred and sample heads harvested and submitted to German institutions of higher learning for studies pre-structured to prove their weird race theories.

And there was no human rights outcry!

World outrage at genocidal racial atrocities would only be expressed almost 40 years later when the Germans extended their ‘study’ to Jews and then to fellow Europeans.

And it turned out that even that ‘world outrage’ was specific to race because it ignored a simultaneous genocidal scandal among the European allies fighting the Nazis.

Black soldiers in Allied white armies, particularly US forces, were being segregated and relegated to manual labour at war fronts where their inferior training and ill-equipment for battle reduced them to disposable cannon fodder.

And even so, while the Herero genocide replicated the Jewish holocaust right to the dot, it was not even considered as a punishable criminal precedent in the trial of the same German perpetrators at Nuremberg.

The foregoing is the context in which Ian Smith abandoned university studies to fight for imperial Britain.

The case in point here is that Rhodesian education promoted by the Rhodes scholarship had already inculcated, in the white supremacist, a worldview that prioritised survival of the British Empire above everything else.

Conversely, one would have been tempted to hope that a first-hand experience of the horrors of Nazi racial extermination of Jews would kick-off some kind of ‘Pauline’ realisation of the similar plight of black people under British discrimination in Rhodesia.

One would be tempted to hope that the Rhodesian white supremacists would be human enough to view the break from school to defend human civilisation from Nazism as a kind of sabbatical.

And, one would expect a sabbatical to refocus a scholar’s mind because it would be an opportunity to review studies from the terraces.

It is a chance to look again; a time to introspect.

It is a time to evaluate the benefit of one’s studies to humankind.

The case in point here is that Smith returned from that Second World War ‘sabbatical’ experience, finished his studies at Rhodes University and then returned to Rhodesia to lead the Unilateral Declaration of Independence that would replicate all the German atrocities he had witnessed on Zimbabweans.

It is an outcome that irrefutably confirmed the purpose of the scholarship legacy of the homosexual Rhodes who had established Rhodesia as a commercial enterprise and instructed the occupation forces to kill everything black — even under conditions of surrender.

And now, the whole cast is dead and the indigenous idiom: Seri kweguva hakuna munamato lays them open for conclusive/final judgment by the longer historical context.

And, it is a historical context that indicts the very purpose of the education that cut them out for leadership in our struggle for self-determination.

The education that would give Zimbabwe the highest literacy rate in Africa and one of the highest in the world.

The late former Zimbabwean President Robert Mugabe lived longest (95) — he outlived them all.

And even before he was jailed by Ian Smith, he had become the most educated of the cast and perhaps, because of it, the most eloquent.

He had been ZAPU publicity secretary and the last to abandon the late former Vice-Pesident Joshua Nkomo when the split came.

And then he had become ZANU secretary-general.  After the death of Herbert Chitepo, the ZANLA Mgagao Declaration endorsed him as the new leader of the armed struggle while the historic Chimoio Congress of 1977 made him president of ZANU, a position he would hold for the next 40 years.

He became the first Prime Minister of independent Zimbabwe, a position prescribed by the British-drawn Lancaster House Constitution.

And when the post of Prime Minister had been abolished by an amendment of the same Constitution in, perhaps, the first critical exercise of self-determination in independent Zimbabwe, he had become Executive President of Zimbabwe.

He would retain the position for the next 30 years.

Mugabe outlived (by seven years) Ian Smith (1919-2007) who died at 88 years of age and it translated to a last laugh on the white supremacist UDI Prime Minister who had violently not believed in black majority rule.

Muzorewa (1925-2010), who had the most Christian education, died a disappointed 85-year-old man, nine years before Mugabe who had refused to accept the bishop’s ‘rough change’ called Zimbabwe-Rhodesia and stepped-up the war.

After the war, his erstwhile Rhodesian partners in the Internal Settlement had mocked his naivety at believing that Zimbabwe-Rhodesia had been real and that he had actually been in power.

It has already been stated that he was the leader of the patriotic front formations of ANC, NDP and ZAPU which became PF ZAPU until the 1987 merger with ZANU PF.

The patriotic front formation had started as ZAPU and ended up as ZANU.

It has also already been stated that Joshua Nkomo’s leadership of the patriotic front formations of ANC, NDP and ZAPU had earned him the title ‘Father Zimbabwe’, in which respect it would seem out of turn that the Ndabaningi Sithole-led rebellion that created ZANU should have been against that leadership.

And many have accepted the suggestion notwithstanding that it lacks the relevant historical credence.

But this is a matter for a later part of this series.

Sithole had walked away from Nkomo.

Mugabe had walked with Sithole away from Nkomo.

And then he had walked away from Sithole and rejoined Nkomo with himself as leader. And in the original split, Mugabe had been the last to leave a surprised Nkomo whom he often quoted as having said: ‘Et tu Mugabe!’, taken from Julius Caesar’s surprised ‘Et tu Brute!’ (‘And you too Brutus!’) upon realising that his friend Brutus had joined his assassins.

Incidentally, it is interesting to note that the names Nkomo and Sithole were ‘Nguninised’ versions of the same thing (cow). Neither was a true Nguni but locals ‘Ndebelised’ (Nkomo) and ‘Shanganised’ (Sithole) by the Nguni incursions from South Africa.

Notwithstanding his orphaned upbringing by the Anglican priests, he is the one who walked furthest back to his roots after Western education. He restructured and ‘indigenised’ the ZANU Revolutionary Council into Dare reChimurenga.

He organised the pilgrimage of Nehanda’s spirit medium of the time to Chifombo, Zambia, kuti varonge matare ehondo from exile.

An earlier spirit medium of the same Nehanda had led the First Chimurenga. And, it has already been established in

earlier installments to this series that, in real life, Nehanda had been the daughter Zimbabwe. In view of all this, Chitepo’s effort to organically link the First Chimurenga to the Second Chimurenga for ideological potency was unmistakable. And this was in consolidation to earlier efforts that had: “…concentrated on a regime of political education of the masses to get them to appreciate the goals that the struggle was aiming at. To be fired by the new vision of a new Zimbabwe and to participate in its realization and to realize that the realization of the new Zimbabwe, the new vision that we tried to sell, which we tried to inspire in their hearts could only be achieved by struggles which involved life and death; by armed struggle.”

Chitepo died at age 52 through the hand of Chuck Hind, an ex-British SAS assassin commissioned by Smith for the purpose.

Ian Smith had placed a whopping £10 000 bounty on the fiery nationalist’s head and the British government allowed the recruitment of British mercenaries to defend the Rhodesian rebellion.

Even British aristocracy joined mercenary ranks to defend the rebellion

while telling the world that they had Smith under sanctions.

A classic example of the scandal was Lord Richard Cecil, great grandson to Lord Salisbury after whom the Rhodesian capital had been named. His killing by ZANLA forces on April 20 1978 shook the British aristocracy right to the core and, in that regard, caused a change in attitude that marked a turning point in the course of the war.