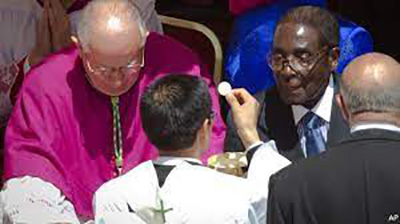 The one with the most Christian upbringing and education as well as career cleric (Abel Muzorewa) became the weakest and the most deceived.

Joshua Nkomo was a lay preacher, preaching the Kingdom of God before leading the patriotic front formations of ANC, NDP and ZAPU that sought first the political freedom. He was the ‘moderate’ and ‘default’ embodiment of national unity. A whole region followed him in and out of national unity.

The post-independence moment of madness that imperialist forces were stocking into civil conflict ended, thanks to his being a principal in the 1987 Unity Accord that has held to date.

Having ‘re-established’ the foregoing facts for clarity’s sake, it is pertinent to reiterate an earlier assertion that these members of the patriotic front formations were actors on a frontier of time often without precise precedents to inform their actions or suggest possible outcomes. All were informed by an education they believed was an instrument of enlightenment and not the benightment that spawned mental slavery.

He lived long enough to see Britain, the US, Canada, Australia and New Zealand become the destinations of choice and, in that respect, the main beneficiaries of the missionary education the British Empire had invested in black Zimbabweans.

Mugabe lived long enough to see the mass exodus of those with that education to Britain, the US, Canada, Australia and New Zealand to sell themselves in slavery to white capitalists and imperialists.

It predisposes them not  to appreciate the goals that the struggle was aiming at.

What this outcome vindicates is that Chitepo’s clarity went well beyond the academic logic that ultimately made Mugabe ‘a formidable pan-Africanist’, so to speak.

Chitepo’s mass education to get the people to appreciate the goals that the struggle was aiming at practically grounded him to the local context, logically leading him to found Dare reChimurenga to prosecute the struggle as an extension of the First Chimurenga. And he rallied the very same ancestral spirits and mediums (Nehanda and others) that had inspired it.

On the other hand, it would appear that Mugabe’s history major (Fort Hare) together with his six other degrees gave him more of a cosmic but less indigenous reference scope.

In retrospect, it is actually not surprising that he replaced Chitepo’s Dare reChimurenga with the Politiburo, fashioned after the Soviet Communist Party.

And, after the 1980 elections, when Rhodesian General Peter Walls queried the ideological logic of Mugabe’s invitation that he (Walls) should lead the new Zimbabwe National Army, the premier designate took pains to draw similarities between his own communism and Western Christianity. The projected persuasion was that communism was acceptable only in so far as it was similar to Christianity. In other words, communism would not be acceptable in its own right. It would be acceptable only as an approximate synonym of Christianity. Karl Marx had to derive his value from his similarity with Jesus.

Elections were followed by independence celebrations Christian style. A Catholic bishop (Patrick Chakaipa) was invited to bless the outcome of a struggle prosecuted as an extension of the First Chimurenga, informed by the very same ancestral spirits and mediums (Nehanda and others) whose execution had been recommended and blessed by another Catholic man of the cloth, Father Richartz.

After independence, the look-east policy that had informed and sustained the armed liberation struggle was overshadowed by friendship with erstwhile enemies. Mugabe became a darling of the West. He was knighted in 1992.

For clarity’s sake, knighthood must be understood as an honour awarded for outstanding contribution to the British Empire. In his case, it turned out to have been a bribe meant to stall the equitable redistribution of land to the landless majority. He was ‘de-knighted’ when he proceeded with the programme. And, luckily for him, he had intriguingly retained the Cold War communist title of ‘Comrade’.

A 2005 interview with CNN Christiane Amanpour showed, not in a direct way, that Mugabe was not unaware of the incongruity between British knights and communist comrades. He reminded the racist CNN anchor kuti: “We did not get democracy from the British. We had to fight the British to get one-man one-vote.”

A birthday interview revealed that Mugabe always carried the Catholic rosary in his pocket and he proceeded to bring it out as proof. He had done so throughout his leadership of ZANU and Zimbabwe and, all that notwithstanding his obvious knowledge that the Catholic Church had championed slavery of black people as well as recommended the ethnic extermination of all Shona people above the age of 14 during the First Chimurenga. Additionally, the Catholic Church had stood with the regime changers who campaigned for the current illegal sanctions against Zimbabwe. A classic example of the regime changers was the adulterous Archbishop Pius Ncube.

The incongruities in Mugabe and the rest of the cast are found in the majority of us without our being aware of it for the simple reason that the instruments of analysis must be salvaged from the instruments of subversion and it is not an easy task. This may perhaps explain how the logic that informed the post-independence repatriation of the remains of the heroes slain by the Rhodesian mafia in Zambia during the liberation struggle (Chitepo, Nikita Mangena and Josiah Z. Moyo) was not used to inform the expatriation of the remains of homosexual Rhodes from the sacred Matobo Hills.

The same could also explain how Mugabe defied the EU travel ban to attend the funeral of Pope John Paul II but shied from touring the horrors  of wholesale Rhodesian atrocities unearthed from the Chibondo mineshaft and Butcher farm.

Ultimately, this may actually explain why the majority in the leadership send their children to exclusive private schools and Western universities whose curricula are tailored not to appreciate the goals the liberation struggle aimed at.

A classic example of this leadership inconsistency is former First Lady Grace Mugabe’s exclusive junior and high schools in Mazowe. It is a far cry from the mass education Chitepo envisaged to establish ‘an entirely new society based on no exploitation, true equality and true justice for all.’

This series does not catalogue shortcomings of the patriotic front formations cast to diminish their iconic contributions to the liberation struggle. Rather, it casts them (as already mentioned) as historic figures who acted on a frontier of time where no experiment could be deemed a failure; a frontier of time where each action is valued for the corrective lessons abstractable by future generations.

It is the ‘patriotic’ identification of their errors of judgment that should guide future patriotic front formations not to commit the same errors, in a manner that progressively leads us away from the same old sites of struggle.