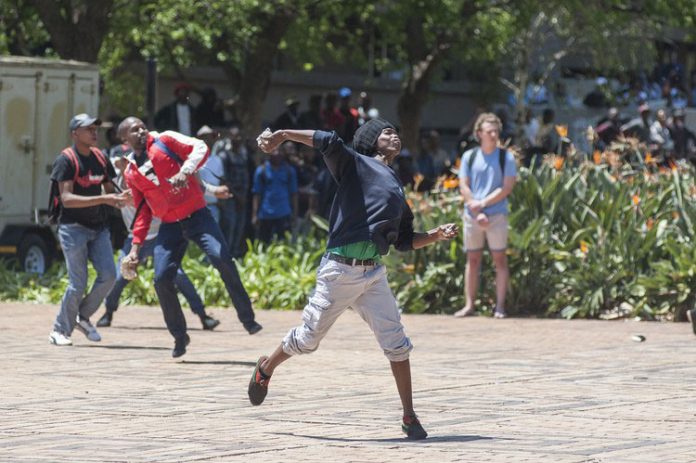 PEACEFUL marchers to the peaceful demo in town blocked the path of a tipper carrying gravel for road construction.

The driver was accused of wanting to run over the peaceful marchers and given a hiding.

And a peaceful marcher took over the tipper and tipped the load of gravel in the middle of the lane from town, effectively blocking it.

And the peaceful marchers, to the peaceful demo in town, immediately armed themselves with rocks from the gravel mount.

From then on, the peaceful madding crowd got madder.

From his 10th floor office in the middle of town, the man whose wife had refused to be touched watched the build-up of the violent peaceful march.

The graduates he had given a lift into town had changed their mind about joining the peaceful demo in their graduation gowns.

The Entrepreneurship graduate had concurred.

And they had implored him to shelter them until the peace had abated.

A police officer in a riot police truck spoke to peaceful marchers through a loudspeaker. He instructed them to go back the way they had come.

The marchers broke into song and started dancing.

A peaceful marcher threw a stone that hit the grill of the high-wheeled truck.

The riot details did not disembark.

They were 23 against several hundred with instructions to make Zimbabwe ungovernable.

More stones were thrown, with some scoring direct hits.

The voice from the loudspeaker warned the violent peaceful marchers to go home.

Warning shots were fired from the police truck.

Some marchers broke nerve and ran.

There was a stampede.

More stones were thrown at the police.

An officer thought he heard shots from a different weapon.

A different weapon fired from the madding crowd.

Then there was teargas and pandemonium!

The police truck took the opportunity to turn into the lane to town and withdraw.

The madding crowd pressed on to town.

The wife who had been ‘liked’ by a legion of followers for showing off Chicken Inn, pizza and microwave oven on her WhatsApp status and Facebook page did not reply to the youth who tried the kitchen door and called out: “Gulez tisheedzereiwo blaaz vataure nema-face!”

She had remained very still, her heart pounding.

After some time, she had heard him walk away.

And that is when she had decided to take matters into her own hands.

She tip-toed to her bedroom, not wanting her tense husband to notice.

She softly closed the door behind her and went into the ensuite and was about to dial her brother when she heard youths talking below the bathroom window: “Vakiya ma-door and they are not communicating. And apa they promised us lots of stuff. Manje hakusi kushandisana here uku nhai boyz?”

“I think you are right.”

“I still think they can’t be stupid enough to ignore us, especially knowing kuti we have their son with us panze pano apa.”

“And the Ford Ranger too.”

There was a chuckle.

“That is true. His life changed when he became an activist.”

“When I first knew him, he was using just the three-roomed cottage. And then, completely out of the blue, he took over the whole house.”

The wife who did not know that the money from Washington had been far more than the man had declared got even more frightened by what she overheard. She tip-toed out of the ensuite and very carefully closed the door.

She went to the bedroom door and very, very carefully turned the key.

And then she sat on the bed and dialed her brother’s number.

The phone rang until it cut.

He didn’t pick up.

She started shaking and tears streamed down her cheeks.

And then the phone vibrated.

She thought the youths she had heard talking outside would still be there and did not want to risk being heard.

She cut the phone and began to SMS.

“ Mukoma mhanyai ne-police. It’s an emergence. Vanhu ve-demo are threatening to kill us. Please hurry and save us mwana wamai vangu.”

She sent the message and the brother immediately called back: “Please explain what’s happening. Where are you?”

A beautiful woman was believing an ugly man who was telling her that his Bible, shoko raMwari rinoti, when you begin to see signs like these demos you must know that the end is nigh and that

A street dweller observing the scandal with keen interest said to no-one in particular: “The end signs were there even before mwanakomana wemunhu came kuzofira zvitema zvevanhu.”

The ugly man of God ignored the street dweller with a head as dirty as a public toilet mop.

He told the beautiful woman that, like everyone else, she had been created in the image of God.

And the ugly image of God put his ugly hands on the white woman’s hair sewn onto the scalp of the beautiful black image of God.

And the beautiful black image of God with white woman’s hair sewn onto her scalp said: “I receive!” to something that the ugly image of God said to her in a low tone.

And then it was the turn of the ugly image of God to ‘receive’ the beautiful black image of God’s number so that he could follow up on his anointing.

And a less beautiful woman, also created in the image of God, was joined by two others in the queue to get the lucky ugly image of God’s anointing.

And the street image of God, with a head as dirty as a public toilet mop, said: ‘Ko ndini ndaii?’ and also joined the queue to plead guilty to the crime of killing mwanakomana wemunhu.

And he said to an image of God kneeling next to him: “You can’t plead for mercy without first pleading guilty. And to plead for the greatest mercy you must confess to the worst crime possible. And no crime could be worse than killing the creator who became his own son in order to be killed by his creations in order to forgive them of the sins already written in his book of life.”

And when it was almost the turn of the street image of God’s dirty head to be touched and anointed by the ugly man, the ugly image of God flinched from his calling and said: “Vasara mese, please come to our church on Sunday.”

And the street image of God did not miss a thing. His dirty head mopped the meaning of it all and he said: “I receive!”

The peaceful demonstrators who had lost their faith in the face of weapons fashioned for peace forgot that they were in concealment and burst out in laughter.

They encouraged the mad image of God to keep talking and filmed him with their cell-phones.

And the street dweller, created in the image of God, warmed up to the acceptance of the church and civic society that had lost their faith and said: “I was expecting the man of God to cast my legion of demons into the swine demonstrating on the streets.”

The church and civic society burst out in laughter once again.

And a riot police detail, attracted by the noise, appeared in the doorway.

And the ugly man, created in the image of God, threw the first stone.

And the church and civic society followed his lead and attacked.

And the riot police image of God disappeared.

And smoking things fashioned for peace were thrown through the door.

The street image of God, with a head as dirty as a public toilet mop, smiled at the police image of God in riot gear.