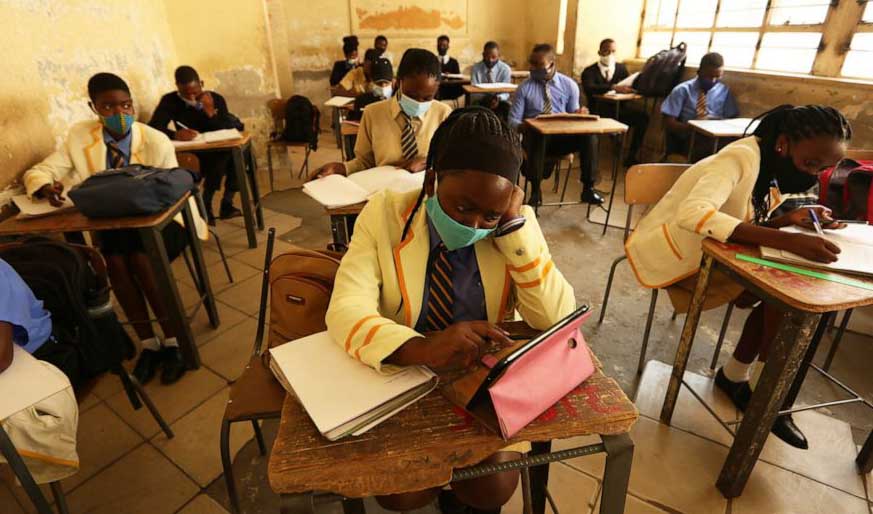 I MET a young man last Christmas who works in one of the capital’s plush suburbs.

His story left me perplexed.

“I work here because I need cash. Like in this instance, I need to buy my wife something nice for Christmas,” he said.

“Otherwise everything I need is there at home in the Chishawasha area.

“We harvest so much maize every year and eat green mealies almost all year round.

“There are lush gardens where we grow green mealies, beans, butternut, potatoes; in fact, almost anything we want.

“There is plenty of water, yet when you visit a friend in town you cannot believe that they have to count every cup of water and you can’t bath with as much water as you want (sic).

“Sometimes their water is not safe to drink and some of the water comes from open wells. No wonder there are periodic cholera outbreaks.

“At home in Chishawasha, you can bath in 40 litres of water if you want.

“There is plenty of everything.

“We also rear pigs and chickens at home, so relish is not a problem.

“I actually have six hectares of good land which I am not using and I’m thinking of renting it to the man I’m currently working for here.”

Dear reader, I tried to figure out why this man needed to work as a common labourer at someone’s homestead.

He would arrive in the morning at 7am and work hard until 5pm.

He would make fire for his master’s wife, sweep the grounds, fetch water from the tanks in 20-litre buckets and water the flowers.

He would go down to the fields, clear the bushes and prepare the ground for sowing.

To see him arrive at the homestead in the morning with firewood, you would think he is a husband coming from the fields with firewood for his wife.

He literally does everything; from washing the cars, taking out trash, digging the rubbish pits, planting the lawn and maintaining it.

In the evening, he would walk home extremely tired, only to start again tomorrow at 7am.

He attends to most maintenance work; you could, in fact, call him the estate manager except he is paid a gardener’s wages.

But then you wonder: Is this young person really poor?

What is it that makes him submit to labour so much for someone else?

I asked him if he sold the green mealies at all.

He said: “Not really, hakuna kwekutengesera, such that some people go to Mabvuku with their green mealies but it is too far.”

Here is someone who is fairly comfortable but needs cash for sugar, soap, bread, cooking oil as well as other things like clothing, shoes and other extras and services which require cash.

But why choose to raise cash by working for someone else?

He works about nine hours a day.

What if he invested the nine hours a day marketing his produce?

A stall along Mutoko Road stocked with green mealies and other green goodies from his garden would not fail to attract customers as they drive past.

He could even roast his green mealies by Mutoko Road and there will be plenty of takers.

He could focus on raising pigs, chickens and goats commercially, and these would fetch a handsome profit for his family.

Why is he comfortable working for someone instead of being his own master — an entrepreneur producing goods and marketing them for oneself?

Nine hours a day for five days plus four hours on Saturdays and two hours of walking each day adds up to many hours.

So many productive hours which, if ploughed into his own productive activities, would yield so much from such agriculturally favourable conditions.

But he spends so many hours working for someone else. When does he spend time on flowers at his home, his lawn, trimming his own hedge, stocking firewood for his wife, helping her bring water into the home, helping her in the garden, on the fields?

Six days a week are spent on hard work on someone else’s estate while the wife bears the burden of the home, and there is just half a day on Saturday and Sunday for everything he should do for his own family.

But then the question is: Why not invest in producing and marketing his own goods when his natural environment is so conducive to that?

Greens, in particular green mealies, sell like hot cakes all year round.

In his case, he does not even have to go to Mbare to order anything.

He can just grow the produce and market it close to home.

It is this dehumanising mentality which says one must sell his/her labour to be recognised as a productive member of socirty.

It is this mentality that says it is lofty to have ‘murungu wangu’, to have a boss than to be one’s own boss.

Why depend on someone else when you can stand on your own feet.

It is the capitalist mentality that categorises people into capitalists and labourers; with the labourers feeling honoured to associate with the moneyed, even if it means the association stops at the kitchen door where you get your mug of tea and two-or-three slices of bread.

Here is someone with a rich heritage; lush lands that have the potential to grow so much, but chooses to rather invest his labour in someone’s homestead, someone’s plot, while his own land lies fallow.

And he is thinking of renting out his six hectares of good productive land, which receives so much rain and the potential is so great.

We have forgotten who we are.

The legacy of ownership has been erased from our memory by capitalism and one finds no meaning in producing as an owner, but producing for someone else and being paid a few dollars.

It is a tragic mentality that has stalked us since the arrival of the British, and now it has caught up with us.

We have run an education system which has not taught our children to be entrepreneurs but to seek employment as the only source of their means of livelihood.

How many millions of youths cannot see themselves as their own masters but would rather succumb to the vagaries of the capitalist world, opting to sell their labour than use it to create their own means of livelihood?

For some reason, labour on one’s lands is not that worthy but that sold to someone else, ‘vaya vakaita mari kare’!

It’s time to reclaim our heritage.

Let us own our labour.