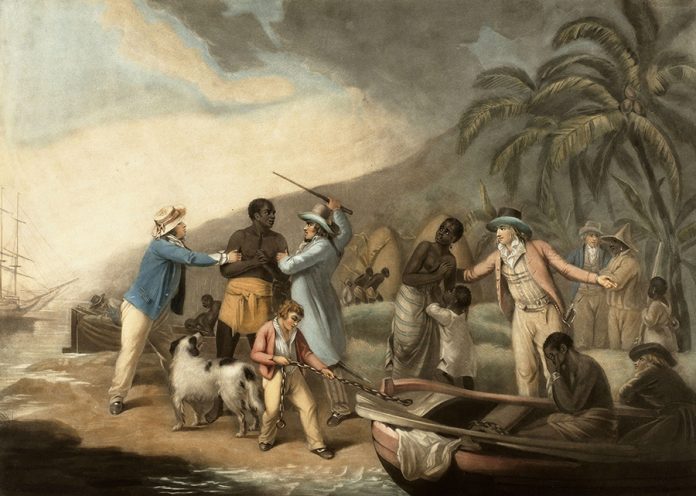 INITIALLY, the Portuguese were only interested in Mozambique as a stepping-stone to India and the spice trade.

Faced with the difficulties of financing that trade, they tried to locate and capture the gold mines of Munhumutapa in the interior.

When the gold supply failed to come up to expectations, the Portuguese dealt in ivory and inevitably, they eventually dealt in slaves.

From small beginnings the slave trade became an increasingly important element in exploiting the territory and, over the century, the trade of human expanded rapidly so that by 1790, over 9 000 people were being exported annually as slaves from the Mozambican colony.

After the British abolished the slave trade in 1807, efforts by the Royal Navy to suppress it in western Africa stimulated the trade for slaves in eastern Africa.

The numbers exported rose dramatically, with approximately one million slaves exported from Mozambique during the 1800s.

The Arabs, Swahilis, Prazos, the Yao, and the Tsonga, all participated in the export of human beings from the interior as far afield as MaDzimbahwe, northern South Africa and Malawi through the Island of Mozambique, Quelimane, Inhambane and Lourenço Marques (now Maputo), by Portuguese, Brazilian and French slave traders to Brazil, in South America, the sugar estates of the Indian Ocean Islands and Madagascar.

The Portuguese came under increasing pressure to abolish slavery and in 1869, it was finally abolished in Portugal and India and in 1879, in the African territories.

However, it was not effectively suppressed in the central and northern parts of the Portuguese colony until the early 20th Century.

Captains were appointed triennially in Lisbon to administer imperial monopolies in the colonies’ gold and ivory.

In effect, it granted the ‘captains’ three years to amass their personal fortunes by whatever means necessary; means that have often been described as ‘asset-stripping activities’.

In time, as the ‘captains’ extended and enforced their monopolies through the colony, all other trade and normal commercial and other indigenous coastal activity became technically contra-banded.

This resulted in numerous conflicts which, in the 19th Century, eventually turned to warfare and the Portuguese army had to re-conquer territory from people who called themselves ‘Portuguese’.

Technically, Portuguese policy regarded their ‘colonial subjects’ as Portuguese, but to qualify for full citizenship it was necessary for the indigene Mozambicans to become wholly assimilated in Portuguese culture.

This was embodied in a law of 1914, that laid out the requirements for attaining full citizenship namely: the person had to be able to read, write and speak Portuguese and his children had to be raised as Portuguese; abandon his traditional beliefs and adopt Christianity, and abandon his indigenous customs for Western ones.

Meeting these criteria, however, was extremely difficult and few qualified, and at the outbreak of the First World War, many indigenous Mozambicans were conscripted to fight in the war, notwithstanding their denial of full citizenship.

This resulted in a rebellion in 1917, in Zambezi.

The Portuguese meanwhile, lacked the resources to develop the areas they occupied and leased out some territories in Mozambique that they claimed, to British companies that attempted to develop cotton and sugar plantations and a textile industry.

They were not fully successful and the colony became heavily dependent on remittances by migrant workers in neighbouring colonies and after a railway line connecting Lourenço Marques (now Maputo), to the goldfield in the Transvaal Republic had been built in 1886, they also became dependent on transit goods.

Throughout Portuguese colonial rule, Mozambique was nothing more than a labour pool for neighbouring countries.

In fact, Portuguese claims over the country relied almost entirely on the ability of its colonial administration to control the movement of labour.

It was neither in the interest of South African mining capital nor Portuguese colonial administration to see the labour migrant develop into a proletarian.

In 1875, a simmering dispute between Britain and Portugal over possession of southern territories came to a head and the matter was resolved in Portugal’s favour.

In the mid-1880s, as the European powers scrambled to carve up Africa among themselves accelerated, Portugal’s hold on African territories it claimed remained tenuous.

Their claims were, however, recognised at the Berlin Conference of 1884-1885.

But Portuguese attempts to gain recognition for claims to the territory between Mozambique and Angola did not succeed.

Portugal only gave up its claim to Mashonaland in a treaty with Britain in 1891, which laid down what are largely the current borders.

In 1752, responsibility for the administration of Portuguese holdings in Mozambique was removed from Goa and it became a separate colony under a captain-general.

In 1787 Lourenço Marques (now Maputo, the capital), was fortified and a town began to develop around the fort.

The Portuguese built up Sofala as part of the grand strategy to tap all the gold and ivory coming from the Mutapa State.

Following their failure to establish a monopoly, the Portuguese decided to penetrate the interior Plateau of MaDzimbahwe.

The Munhumutapa Empire, in the interior, was rich in gold and ivory which had initially attracted the Arab-Swahili traders from the Indian Ocean coastal ports of East Africa, and then the Portuguese who came to know about the lucrative gold trade from the East Africa traders.

Realising there was a close link between politics and religion in the State, the Portuguese sought to penetrate it through religion, and endeavoured to Christianise the Mutapa.

Upon his arrival in December 1560, father Gonzalo da Silveira, a Portuguese Jesuit missionary, worked on converting the royal family to Christianity.

The Jesuit was largely successful in his mission since the vast empire had at the time, become heavily embroiled with conspiracies, coup plots, succession disputes and civil wars to the extent that the reigning Mutapa sought Portuguese help to hold on to power.

Portuguese relations with Mutapa were characterised by intrigue and conspiracies, which ultimately led to conflict within the Mutapa State and with those outside the state.

In the 1560s, Portuguese attempts to Christianise the indigenes eventually sparked a conflict within the Mutapa State.

His murder only aggravated tensions in the Mutapa State and fuelled Portuguese demands for the expulsion of all Arab-Swahili traders and the surrender of the State’s gold mines to the king of Portugal.

During the second half of the 16th Century, the Portuguese traded guns for goods such as gold, ivory and agricultural produce which, in turn, changed the nature of warfare in the region.

Between 1569 and 1575, the Portuguese organised three abortive expeditions to conquer the Mutapa State and control the gold.

The Portuguese took advantage to advance their imperial interests by using slave labour to work on the land they had acquired under various treaties.  Following the introduction of the ‘prazo’ system the Mutapa also lost much land to the Portuguese.  This forced many of the people to move into adjacent areas.

Dr. Michelina Rudo Andreucci is a Zimbabwean-Italian Researcher, Industrial Design Consultant and is a published author in her field.  For Comments E-mail: linamanucci@gmail.com