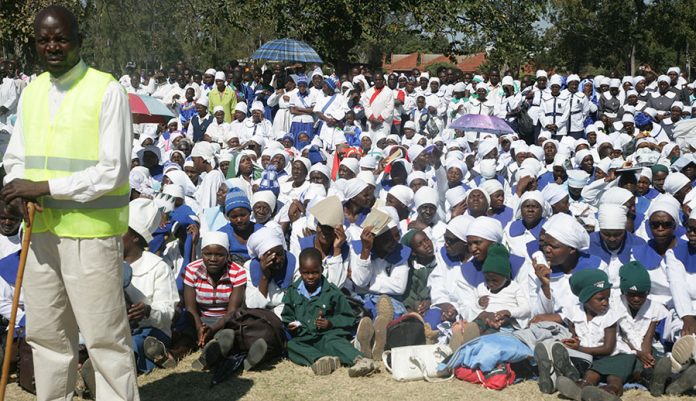 Each of the modern sovereign nations in Africa today, has its own particular history and each in turn comprises numerous ethnic groups with different languages and unique customs and religious beliefs.

During the colonial era, many African converts to Christianity, unable to fully reconcile their beliefs with the teachings of their Western Church leaders, split from their parent Christian churches resulting in African Initiated Churches, aka African Independent Churches or African Indigenous Churches (AIC).

The oldest AIC is the Ethiopian Orthodox Church – Tewahedo, which dates from the 4th Century and was one of the first Christian churches in the world.

Separation from the parent Church was not unfamiliar, since many of the parent Christian churches, particularly those from a Protestant tradition, like the Anglican and Methodist churches, had themselves emerged from a process of schism and synthesis.

In Africa, motives for splits were usually political – to escape white colonial or cultural control – the result of trying to accommodate Christian beliefs within an African worldview.

For the Shona, this implies the African concept of pan-vitalism – the belief that everything in the universe has life; that the world is not lifeless and material.

It is alive, for there are spirits in the rocks, caves, trees, forests, rivers and the land itself.

African Independent Churches (AICs) or religious movements often resulted from a process of acculturation between traditional African beliefs and Protestant Christianity – ‘syncretism’ or the partial integration between aspects of Christian belief and African traditional religion.

Thus, the theory of syncretic religion assumes the reconciliation of the African belief in the spiritual ancestral world and Christian beliefs.

Likewise, in Zimbabwe, during the colonial period, many Zimbabwean converts to Christianity discriminated against by white missionaries were unable fully to reconcile their African traditional religious and cultural beliefs with the teachings of their church leaders and inevitably split from their parent Christian churches to form AICs.

Beginning in the 1930s, as a protest against white Christianity and white domination in mission churches where Africans were considered ‘second-class’ and had to get an education in order to preach or come close to God. Fueled by the impossibility of promotion above certain levels for Zimbabweans and a tendency to demote them as the white missionary force increased, splits and breakaways from mission churches began to form AICs. The vapostori are good examples of AICs.

While they harkened back to some African traditions, they insisted that other traditions, like witchcraft, be stopped; thus creating a new kind of religious movement, containing a mixture of both old and new.

Johane Masowe and Johane Marange began their ministries in 1932 during the height of colonialism, when Africans were feeling the effects of racial discrimination and the Great Depression.

Both Marange and Masowe preached in reaction to white domination and discrimination, promising better circumstances for Africans without white colonial influence.

The Johane Marange Apostolic Church (JMAC) was founded by Muchabaya Momberume who changed his name to Johane on baptism in 1932 at a Methodist mission station in eastern Zimbabwe.

The Johane Masowe weChishanu Apostolic Church (JMCAC) was founded in the Makoni District of eastern Zimbabwe by an Anglican convert, Shoniwa Masedza, who took the name Johane Masowe.

In their early stages, the JMAC and the JMCAC looked much alike.

Both Marange and Masowe claimed to have heard voices, had visions and dreams with each claiming personal revelations.

Both Marange and Masowe developed a very rich, symbolically complex liturgy; neither developed central location of any sort preferring to preach in the open.

Both believed in water baptism, although Masowe allowed no-one but himself to baptise.

The Africa Apostolic Church (AAC) was founded by Paul Mwazha in 1951.

Marange claimed to have received a full charter of his Church with all its rules and practices through the direct dictation of the Holy Spirit.

For Marange, the revelation was found written down in a book, The New Revelations of the Apostles.

It is from his visions that Marange was regarded as the second John the Baptist who had come to redeem the world as it was written in the Bible.

Both Marange and Masowe had almost messianic authority which came to them directly, and only through personal revelation and the power of the Holy Spirit.

To destroy colonialism, Masowe proclaimed a message of withdrawal from European things – no bibles for his followers, though he had one himself from the start, no schools and no-one was to be employed in companies.  His followers were to survive by making and selling baskets, furniture and tinware by which to contribute to the welfare of their own group; any other work is unacceptable.

Initially, Masowe even rejected the Bible because Africans did not originally have books.

The Bible, in book forms, implied the need for European education and money in order to know what God held.  Masowe felt that God spoke to him directly and that the God of the Bible was the same as the Shona creator – Mwari.

Both the JMAC and the JMCAC did not allow their children to go further than elementary Grade Seven in education, fearing that their children might be won over by mission churches.

The JMAC allowed children to do only elementary education which made them able to read the Bible.

They had no intention of abiding by colonial restrictions on movements and continued to preach and baptise people even after being arrested and imprisoned.

Despite their emphasis on Africa, that is South Africa, Zambia, throughout Central and East Africa, Mozambique and Congo.

On the instructions of preaching the gospel worldwide, the vapostori continue to make further pilgrimages and spread to such places as Britain, Germany, the United States and India.

They demonstrate that Africans can achieve far more than they and others have expected, building on their own cultural heritage.

Colonisation and the lack of African indigenisation in the leadership of missionary churches provided fertile ground for the formation of AICs.

Today this has been melded with the Christian message into the syncretic faith; part Christian, part tradition, which is followed by over 50 percent of the people.

The traditional aspect of this dual-sided faith is rooted in the custom of channelling all prayers to the supreme creator, ‘Mwari’, through family ancestors.