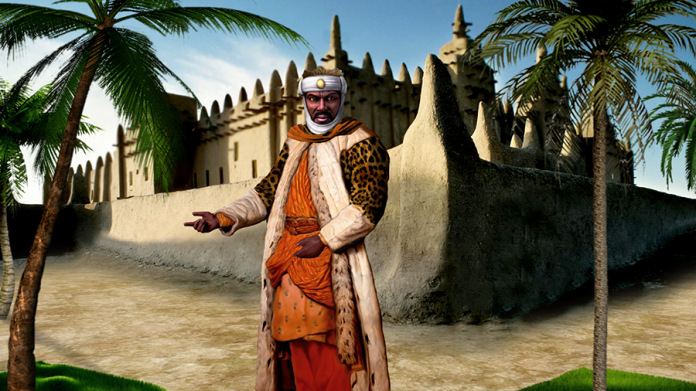 THE drying of the Sahara created a formidable barrier between the northern and southern portions of the African continent.

Two important exceptions were Nubian Sudan, which was linked to Egypt by the Nile and Ethiopia, which could trade with the northern regions over the Red Sea.

Powerful states grew up in these regions, with ideas and technologies from the Middle East and Europe via Muslim traders affecting the continent, mainly in the north of Africa.

Many wealthy empires grew around coastal areas or large rivers that served as part of important trade routes.

The Mali Kingdom and Songhai Empire grew along the Niger River between 1200 and 1590.

Berber traders from the Sahel, a region south of the Sahara Desert, traded dates, copper, horses, weapons and cloth that they brought from north Africa by camel caravans.

West Africans created a demand for salt collected at desert oases and used to preserve food as well as seasoning.

The institutional framework for long-distance trade across political and cultural boundaries had long been strengthened by the adoption of Islam as a cultural and moral foundation for trust among, and with, traders.

With the Almoravids’ focus on North Africa, following the collapse of Ghana in the late 12th Century, the western Sudan broke up into smaller kingdoms.

The Mali, Songhai and Kanem-Bornu kingdoms arose in the region.

Gold, which was abundant, was the main trade of these states. Also important for their economies was the trans-Sahara slave trade that shipped large numbers of slaves to North Africa.

In the mid-13th Century, the ruling Keita clan of Mali forged a new and lasting empire, built on the monopolisation of the lucrative north-south gold trade.

The Keita kings dominated enough of the Sahel to control the flow of West African gold from the Senegal regions and the forestlands south of the Niger to the trans-Saharan trade routes and the influx of copper and salt in exchange.

Based south of their Ghanaian predecessors, in the fertile land along the Niger, they controlled all trade on the upper Niger as well as the Gambia and Senegal trade to the west.

They used enslaved captives for plantation labour in the Niger inland delta to produce surplus food for trade.

Their main skills were metalworking (iron and gold) and weaving of cotton grown within the empire.

The Malinke, a southern Mande-speaking people of the upper Niger region, formed the core population of the new state.

They lived in walled urban settlements typical of the western Savannah region.

Each walled town held 1 000 to 15 000 people and was linked to neighbouring cities by trade and inter-marriage.

The Keita Dynasty had converted to Islam around 1100 CE. Its rulers even claimed descent from Muhammad’s famous muezzin (the leader of a mosque) said to be a former black slave from Abyssinia whose son was said to have settled in the Mande-speaking region.

At its zenith in the 13th and 14th Centuries, Mali’s kings often made the pilgrimage to Mecca, bringing back with them military supports, such as Barbary war horses from north Africa and new ideas about political and military organisation.

Through Muslim traders’ networks, Mali was connected to other areas of Africa, especially to the east.

Mali’s imperial power was built largely by the Keita King Sundiata (or Sunjaatar 1230-1255). Sundiata and his successors exploited their agricultural resources, significant population growth and Malinke commercial skills to build an empire even more powerful than that of Ghana, stretching west nearly to the Atlantic, north-west into the Sahara and east into the central Sudan beyond Timbuktu.

Like their Ghanaian predecessors, they took advantage of their control of access to gold and other West African commodities to cultivate and expand the caravan trade to the North African coast which provided their major source of wealth.

The empire that Sundiata and his successors built ultimately encompassed three major regions and language groups of Sudanic West Africa; but unlike Sonni Ali, who maintained his people’s traditional faith, his successors were emphatically Muslim.

Mali was less a centralised bureaucratic state than the centre of a vast sphere of influence that included provinces and tribute-paying kingdoms.

Many individual chieftaincies were independent but recognised the sovereignty of the supreme, sacred mansa (or emperor) of the Malian realms.

The greatest Keita king was Mansa Musa, who reigned from 1312 to 1337, famous for his historically famous hajj (pilgrimage) to Mecca in 1324, through Mamluk Cairo.

An enormous group accompanied the king to undertake the hajj which included 60 000 men, including 1 200 servants.

He spent or gave away so much gold in Cairo alone that it started an inflation lasting over a decade.

He brought many Muslim scholars, artists, scientists and architects back to Mali, where he consolidated his power and secured peace throughout his vast dominions.

The devout ruler fostered the spread of Islam.

Under Musa’s rule, Timbuktu became famous for its madrasas and libraries, making it the leading intellectual centre of sub-Saharan Islam and a major trading city of the Sahel; retaining its roles long after Mali’s empire declined.

Subsequent to Musa’s death, rivalries for the throne diminished Mali’s dominance and the empire slowly weakened until a new Songhai power succeeded it after c.1450.

The Songhai Kingdom around Gao had been situated on the eastern arc of the great bend of the Niger River as early as the 11th or 12th Century. In 1325, Mansa Musa gained control of the Gao region.

Mali’s domination ended with the rise of a dynasty in Gao, known as the Sunni or Sonni, around 1375. The kingdom became an imperial power under the greatest Sunni ruler, Sonni Ali, who reigned from 1464 to 1492.

For more than a century, the Songhai Empire was arguably the most powerful State in Africa. With a strong military built around a flotilla of river boats and cavalry, Sonni Ali took Jenne and Timbuktu.

He pushed the Tuareg Berbers back into the northern Sahel and Sahara and stifled threats from the southern forest land.  Jenne was one of the important commercial centres in the region, controlled by the empire of Mali in the 13th and 14th centuries.

The Songhai State was modelled on the Islamic Empire of Mali. Muslim judges (qadis) were appointed throughout the empire and Timbuktu was made a major intellectual and legal training centre. Native Songhais were replaced with Arab Muslim immigrants as government officials.  Like Mansa Musa before him, Songhai’s ruler, Askia Muhammad al-Turi, the first Muslim Songhai ruler, made a triumphal pilgrimage to Mecca, where he was hailed as ‘Caliph of the western Sahara’.

From his vast royal treasury, Askia Muhammad supported the poor and Sufi leaders (or marabouts) and built mosques throughout the realm. However, he failed to Islamise the empire or to ensure a strong central state for his successors.

The last powerful ruler was Askia Dawud, who reigned from 1549-1583, brought Songhai’s prosperity and intellectual life to its apogee.

Both trans-Saharan trade and royal patronage of the arts rose to new levels.

Still, difficulties mounted. The last Askias fought the Mossi to the south and Berbers from the north. Civil war broke out over the royal succession in 1586, which divided the empire. In c.1591,

the last Askia of Gao was defeated and the Gao Empire collapsed.

Dr Michelina Andreucci is a Zimbabwean-Italian researcher, industrial design consultant.  She is a published author in her field.  For comments e-mail: linamanucci@gmail.com