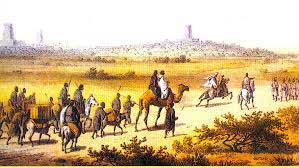 AFRICA is a continent that is home to many societies with different ethnic groups, histories, languages, religions and cultures.

The North African coast and the Sahel lay amidst trading networks linking the Mediterranean world, the growing Islamic realm and the rich kingdoms of West Africa.

The East African coast was integrated into the trading and cultural networks of the Indian Ocean basin, engaged firmly with the Muslim world that had been established along the coast.

The rest of sub-Saharan Africa was culturally diverse, with people engaged primarily in intra-African trade with cultures that occupied other ecological niches.

The protracted Ottoman hegemony transformed the political shape of the Mediterranean world. Merchants and missionaries carried Islam and Arabian cultural influences across the Sahara from North Africa and the Middle East to the western, central and Nilotic Sudan where Muslim conversion played a growing social and political role, especially among the ruling elites who profited from brokering trade between their lands and the Islamic north.

Islam provided a shared arena of expression for some classes and groups in societies over a vast area from Egypt to Senegambia.

In Africa, as elsewhere, new converts modified Islam through a process of syncretism, resulting in distinctively African forms of Islam emerging; faithful to the central tenets of the religion, but differing in observances and customs from those of the Arabian culture.

Egypt, along other North African societies, played a central role in Islamic and Mediterranean history after 1 000 CE.

From Tunisia to Egypt, Sunni religious and political leaders and their Shi’ite, especially Isma’ili, counterparts fight for the minds of the people.

By the 13th Century, the Shi’ites had become a small minority among Muslims in Mediterranean Africa.

A general belligerent regionalism characterised states, city-states and tribal groups north of the Sahara and along the lower Nile, so no single power controlled them for long.

Regionalism persisted even after 1500, when most of North Africa came under the influence and, often, direct control of the Ottoman Empire centered in Istanbul.

The Ottomans’ imperial expansion into Egypt and the Maghreb, north-west of Africa (now Morocco) played a key factor in African history along the Mediterranean.

By 1800 the nominally Ottoman domains, from Egypt to Algeria, were effectively independent.

In Egypt, after their defeat of the Mamluks in 1517, the Ottomans established direct rule; but by the 17th Century, power had passed to Egyptian governors descended from the Mamluks, a military class originally of Turkish slaves.

The Mediterranean coastlands between Egypt and Morocco were officially Ottoman provinces or regencies, but by the 18th Century, Algiers, Tripoli (in modern Libya) and Tunisia had established their own political structures.

Morocco was the only North African sultanate to remain fully independent after 1700.

A major reason for Morocco’s independence was due to the unification of its Arab and Berber populations after 1500 to oppose the Portuguese and the Spaniards.

In sub-Saharan Africa, Islamic influence began as early as the 8th Century.

By 1800, it affected most of the Sudanic belt and the coast of East Africa.

The process was generally peaceful, gradual and partial; Islamisation was rare beyond the ruling or commercial classes.

Islam tended to co-exist or merge with indigenous beliefs.

Agents of Islam brought commercial and political changes as well as the Qur’an, new religious practices and literate culture.

In East Africa, Muslim traders moving down the coastline with the ancient monsoon trade routes had begun to Islamise ports and coastal regions even before 800 CE.

From the 13th Century onward, Islamic trading communities and city-states developed along the eastern coast from Mogadishu to Kilwa.

In the western and central parts of Africa, Islam was introduced mainly by traders from North Africa and the Nile Valley.

Berber bedouins, who plied the desert routes to trading centres such as Awdaghast on the edge of the Sahel as early as the 8th Century, were Islam’s chief agents.

From there, Islam spread south to Kumbi/Kumbi Saleh (Ghana) and beyond, south-east across the Niger and west into Senegambia.

Migrating Arab tribal groups that settled in the central sub-Saharan Sahel also helped spread Islam. In 985, the Kingdom of Gao, east of the Niger bend, was the first West African royal court to officially become Muslim, though Gao rulers did not attempt to convert their subjects. By contrast, the rulers of the later Kingdom of Ghana long-maintained their indigenous traditions even though they traded with Muslims and had Muslim advisers.

South of the Sahara, dynamic processes of state-building and trade were the main forces for cultural change.

In central and South Africa, except along the eastern coast and the West African forests, older African traditions held sway, and there was little or no evidence of Islam beyond individual Muslims involved in trade.

On the eastern coast, however, Islam influenced the development of the Swahili culture and language, a unique blend of African, Indian and Arabian traditions, and Islamic traders linked the region to India, China and the Indies. The spread of Islam in sub-Saharan Africa took place almost entirely through peaceful means.

Thereafter, they forcibly converted the ruling Soninke group of Ghana who spread Islam among their own populace and farther south in the savannah.

They converted Mande-speaking traders, who brought Islam south into the forests.

Farther west, Fulbe rulers of Takrur became Muslim in the 1030s and spread their new faith among their subjects.

The Fulbe, or Fulani, remained important carriers of Islam over the next eight centuries as they migrated gradually into new regions as far east as Lake Chad, where some rulers were Muslim as early as 1100.

Major West African groups strongly resisted Islamisation, especially the Mossi kingdoms founded in the Volta region at Wagadugu around 1050 and Yatenga about 1170.

In the 1st Millennium AD, substantial states rose in the Sahel just south of the Sahara.

From about 1000 to 1600, four of these developed into relatively long-lived empires, namely Ghana, Mali and Songhai in the western Sudan and Kanem-Bornu in the central Sudan.

Ghana, the Soninke term for ‘ruler’, established the model for later Sahelian empires in the western Sudan. Well north of modern Ghana (and unrelated to it except by name), it lay between the inland Niger Delta and the upper Senegal.

A Ghanaian kingdom existed as early as 400-600 AD, but Ghana emerged as a regional power only near the end of the first millennium to flourish for about two centuries. Its capital, Kumbi (or Kumbi Saleh), on the desert’s edge, was well-sited for the Saharan and Sahelian trade networks. Ghana’s major population group was the Soninke.

Ghanaian rulers were descended matrilineally and ruled through a council of ministers.

The king was supreme judge and held court regularly to hear grievances.

The royal ceremonies held in Kumbi Saleh were embellished with the wealth and power befitting a king held to be divinely blessed.

Ghana’s power rested on a solid economic base.

Tribute from the empire’s many chieftaincies and taxes on royal lands and crops supplemented duties levied on all incoming and outgoing trade.

This trade — north-south between the Sahara and the savannah, and especially east-west through the Sahel between Senegambia and more easterly trading towns like Gao on the Niger Bend — involved a variety of goods.

Imported salt, cloth and metal goods such as copper from the north were exchanged for gold and kola nuts from the south.

The regime also controlled the gold and slave trades that originated in the savanna to the south and west.

Although the Ghanaian king and court did not convert to Islam, they made elaborate arrangements to accommodate Muslim traders and government servants in a separate settlement a few miles from Khumbi’s royal preserve.

A huge, well-trained army secured royal control, enabling the kings to extend their influence in the late 10th Century to the Atlantic Ocean coast and to the south.

In 992, Ghanaian troops took Awdaghast from the Berbers.

The Empire, however, was vulnerable to attack from the desert and, in 1054, Almoravid Berber forces seized Awdaghast in a single raid.

Ghana’s empire was destroyed in the late 12th Century, possibly by the anti-Muslim Soso people from the mountains south-east of Kumbi Saleh, a Malinke clan who had long been part of the Ghanaian Empire.

Their brief ascendancy, between 1180 and 1230, ended this once great trans-regional power.

Dr Michelina Rudo Andreucci is a Zimbabwean-Italian researcher, industrial design consultant.  She is a published author in her field.  For comments e-mail: linamanucci@gmail.com