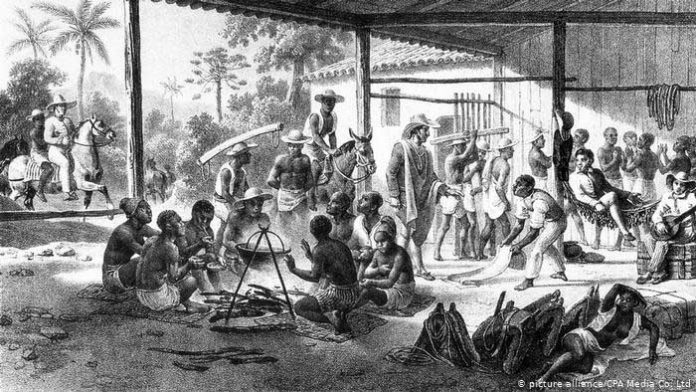 THE East African coastline, stretching from the Suez to the Cape of Good Hope, has been an integral part of Indian Ocean trading networks for millennia; long-sailed by Arab traders.

The discovery of monsoon winds at the beginning of the 1st Millennium AD, and the means to harness them, created a nautical revolution allowing for extensive sea crossings and extensive trade.

During the European Age of Discovery, the trading port cities and city-States of the Swahili East African coast were among the first African cities to come into contact with European sailors and explorers, after Portuguese navigator-explorer Vasco da Gama’s discovery of the route to India and the East African Coast in 1498.

It marked the arrival of the Portuguese in Africa who began, with papal sanction, a gradual process of colonisation and subjugation, controlling the coastal regions down to Sofala, Mozambique, betweenc. 1500-1700 AD.

Portugal’s main objective was to control the routes to the eastern trade markets.

In the 15th Century, Portugal established a strong presence in the Indian Ocean and southern Mozambique.

During this period, Portuguese possessions grew to include parts of present northern Mozambique (where mission work began in 1506) to Mombasa, in present-day Kenya, East Africa.

In 1577, the Dominican Order that entered into Mozambique began to penetrate inland to the goldmines of Munhumutapa, burning Muslim mosques along the way.

At Lake Malawi, Portugal’s initiative was halted when they encountered the recently-created British Protectorate of Nyasaland (now Malawi), which surrounded the homonymous lake on three sides, leaving the eastern coast of the lake to the control of the Portuguese.

The Portuguese were the first Europeans to explore the region of East Africa, present-day Kenya, where the first Christians were reported in 1498, as well as Tanzania and Mozambique.

This enabled the Portuguese to trade directly with the Far East, by sea, challenging the established silk and spice trading networks of mixed land and sea routes between Europe and Asia that were mostly controlled by the Republic of Venice, utilising the Persian Gulf, Red Sea and the ubiquitous camel caravans to reach the eastern Mediterranean.

During the 16th and 17th centuries, the Portuguese built numerous forts around the Indian Ocean (from Mozambique to Malacca) occupying the coasts of Kenya and Tanzania, where, despite founding some trading posts, they were content to control the sea routes.

At the end of the 17th Century, the area along the coast witnessed significant conflicts between Portuguese and Omani forces.

After the fall of Mombasa, the Imam of Oman sent garrisons and governors to cities such as Pate, Lamu, Mombasa, Zanzibar and Kilwa.

In 1828, an Omani garrison was installed at Fort Jesus, which housed the garrison of a Portuguese settlement at Mombasa, and founded the Sultanate of Zanzibar.  Zanzibar became the main slave market of the Swahili Coast and an increasingly important part of the Omani Empire.

For the first time in the history of East Africa, Islam took root in the interior lands of Kenya and Tanzania, up to the Great Lakes Region the Omanis of Oman, had come in contact with, and accepted, Islam in the 7th Century AD.

As a result of the establishment of clove plantations, the Sultanate of Zanzibar required many slaves to maintain its main export product.

Large slave caravans, funded by wealthy Indian merchants, were organised by the Omanis who destroyed the indigenous populations’ economy and introduced firearms in exchange for slaves and ivory.

The direct slave trade brought about social and religious changes to the area.

However, the Sultanate’s plundering economy, based solely on slavery and the export of tropical products such as ivory and cloves, was its downfall, since the limited number of these products increased the instability of its economic system.

The prohibition of the slave trade in 1876 and the development of steam navigation eventually destroyed the supremacy of the Omani fleet.  The opening of the Suez Canal imposed one last blow on the Sultanate, causing it to lose its primary source of wealth.

The arrival of the Europeans and Christianity in Africa is, for the most part, seen as the precursor to slavery and colonisation as well as the beginning of the end of the African’s autonomous existence in their land of origin.

An event that is frequently overlooked, however, was the coming of the Arabs and Islam and what may be the longest-lasting and most tragic form of slavery.

From the late 17th Century, the powerful Omani Empire was competing with Portugal and Britain for supremacy in the Persian Gulf and Indian Ocean.

At its peak in the 19th Century, Omani influence and control extended across the Strait of Hormuz to modern-day Iran and Pakistan and as far south as Zanzibar on the East African Coast.

In the 20th Century, its power declined as the Sultanate came under the influence of the United Kingdom.

For over 300 years, the relations built between the two empires were based on mutual benefits.  The UK recognised Oman’s geographical importance as a trading hub that secured their trade lanes in the Arabian Gulf and Indian Ocean and protected their empire in the Indian sub-continent.

Muscat, its capital, was historically among the most important trading ports of the Indian Ocean, and the principal trading port of the Persian Gulf region.

In need of an outpost to protect their sea lanes, the Portuguese built and fortified the city of Muscat.

In 1552, an Ottoman fleet captured Muscat during the battle for control of the Persian Gulf and the Indian Ocean.

The Ottoman Turks captured Muscat from the Portuguese in 1581 and held it until 1588.  Eventually, rebellious tribes drove out the Portuguese, but were themselves pushed out in 1741.  Apart for a brief Persian invasion in the late 1740s, Oman has been self-governing ever since.

Thereafter, the Omanis effortlessly expelled the Portuguese from Zanzibar and from all other coastal regions north of Mozambique, where they remained until 1975.

In the 1880s, official Omani Arab presence in Kenya was checked by German and British seizure of key ports and their establishment of crucial trade alliances with influential local leaders.

Like their predecessors, however, the Omani Arabs were only able to control the coastal areas and not the interior.

In the African Great Lakes Region, the Omani Arabs posed the most direct challenge to Portuguese influence.

They besieged Portuguese fortresses and openly attacked naval vessels and, by 1730, had expelled the Portuguese from the Kenyan and Tanzanian coasts.

By this time, the Portuguese had lost interest in the spice trade sea route due to its decreasing profitability.

The Arabs reclaimed much of the Indian Ocean trade, forcing the Portuguese to retreat south where they remained in Portuguese East Africa (Mozambique) as sole rulers until Mozambique’s independence in 1975.

Portugal’s main goal on the Swahili coast was to take control of the spice trade from the Arabs. The construction of Fort Jesus in Mombasa, in 1593, was meant to solidify Portuguese hegemony in the region, but their influence was clipped by British, Dutch and Omani Arab incursions into the Great Lakes region during the 17th Century.

Indian Ocean trade extended deep into the interior of the continent and had a great impact on the people, even among those people who lived far from the ocean, until the imposition of colonialism diverted the focus of African trade and production away from the Indian Ocean toward the metropolitan colonial powers.

African and Asian influences have left a lasting impression on the Madagascar populations. It is the largest island of the Indian Ocean and the fourth largest island in the world, with inhabitants as diverse as it’s flora and fauna.

The coastal inhabitants on Madagascar were active participants in pre-modern Indian Ocean trade networks by around 1150.

Trade from the west and east coasts of Madagascar was dominated by leaders of a variety of political States and confederations. The Europeans arrived on Madagascar during the 16th Century.

By the 19th Century, a strong centralised kingdom developed in the interior that dominated much of the island’s export trade until the French colonised the island in 1896.

Madagascar became part of the French colonial empire after persuading Britain to relinquish its interests on the island in exchange for control of Zanzibar.

The French settled in Madagascar, along with a group of smaller islands nearby, the Comoros Archipelago as well as many minor islets.

The four main islands of the archipelago lie across the northern end of the Mozambique Channel between the African mainland and Madagascar.

At the far southern reaches of the monsoon wind system, the islands constitute a southern outpost of the Swahili cultural zone as well as serving as stepping stones between the continent and Madagascar; culturally and ecologically, the islands’ influences are from both.

The islands may well have been first visited during the settlement of Madagascar; Islam arrived in the late first millennium and the islands’ economies grew as traders and slavers took advantage of their pivotal position in the Indian Ocean.

Arab governance of all the major ports along the Swahili coast continued until British interests, aimed particularly at ending the slave trade and creation of a wage labour system, began to put pressure on Omani rule.

Zanzibar’s influences in the Comoros Archipelago in the Indian Ocean indirectly introduced Omani customs to the Comorian culture. These influences include clothing traditions and wedding ceremonies

After traditional land routes to India had been closed by the Ottoman Turks, Portugal hoped to use this sea route, pioneered by Vasco da Gama, to break the once Venetian trading monopoly.

At about the same time that the east coast trading centres were beginning to flourish, a different kind of civilisation was thriving farther south in south-eastern Africa, in the rocky, savannah-woodland water-shed between the Limpopo and Zambezi rivers.

This civilisation was sited far enough inland never to have felt the impact of Islam.

Founded in the 10th or 11th Century by Shona-speaking Bantu people, it became a large and prosperous State between the late 13th and late 15th centuries.