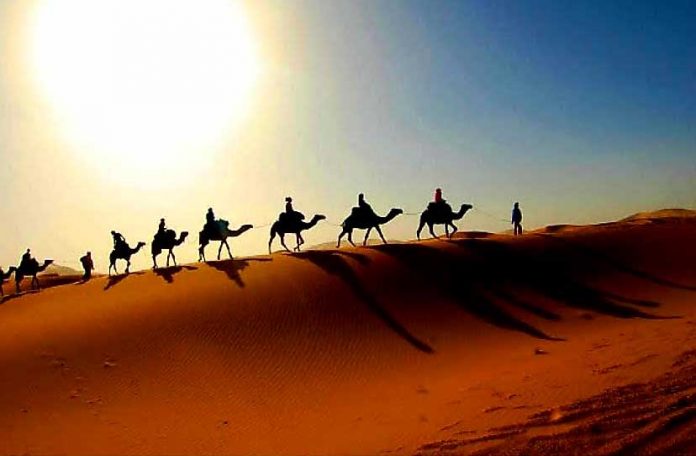 THE Sudan is the region bounded by the Sahara in the north, the Gulf of Guinea to the south, the Atlantic Ocean to the west and the mountains of Ethiopia to the east.

In the rich savanna of western Sudan, where the Bantu migration originated, a series of kingdoms originated before European intrusion began in the 1400s and 1500s.

Families and clans affiliated by blood kinship lived together in villages or small city-States.

Some villages formed kingdoms, with the king and his family forming the aristocracy.

Kingship in the Sudan emerged from priesthood, whose members had the ability to ask for rain and have contact with spiritual powers.

As elsewhere in Africa, kings had religious consent or patronage for their authority and were often considered divine.

Because special ceremonies were necessary to satisfy the spirits, which had to be propitiated from time to time, priests with the knowledge and power to communicate with them through sacred rituals were important.

Kanem-Bornu, in the central Sudan, was the fourth sizable Sahelian Empire to arise after 1100.

Initially named Kanem, it began as a southern Saharan confederation of nomadic tribes known as Zaghawah.

By the 12th Century, a Zaghawah group, the Kanuri, settled in Kanem from where, during the 13th Century, they began a campaign of military expansion.

Their leader, a Muslim named Mai Dunama Dibbalemi (reigned c. 1221–1259), was a contemporary of Sundiata in Mali.

He used a synthesis of Islam and African traditions of sacred kingship to sanction his rule.

Islam provided a rationale for expansion through jihad or ‘holy struggle/war’ against polytheists.

Dibbalemi and his successors extended Kanuri power north into the desert and north-east along the Sahelian-Saharan fringe.  They controlled important trade routes in both directions – north to Libya and east to the Nile.

The integration of Kanuri and local Kanembu peoples was witnessed within the next two centuries.

Like Mali to the west, Kanem’s dominion was of two-pronged direct rule over, and taxation of, core territories and indirect control over and collection of tribute from a wider region of vassal chieftaincies.

Islamic acculturation progressed most swiftly in the main territories.

There was a corresponding transformation of the African Empires in the Western Sudan.

After 1400, the locus of power shifted from Kanem to Bornu, south-west of Lake Chad, where, in the 1490s, a new Kanuri Empire arose almost simultaneously with the collapse of the Askia Dynasty of the Songhai Empire at Gao.

He set up an avowedly Islamic state and extended his rule as far as Hausaland, between Bornu and the Niger.

He moved the centre of trading activity as well as political power from the Niger Bend east to Kanuri-controlled territory.

Deriving its prosperity from the trans-Saharan trade, Idris Alawma’s regional empire survived for nearly a century.

It was broken up by a long famine, Tuareg attacks, weak leadership and loss of control over trade to smaller, better-organised Hausa States to the west.

The Christian States of Maqurra and Alwa in Nilotic Sudan, or Nubia in the Eastern Sudan, began in the early 7th Century and lasted for more than 600 years.

They maintained political, religious and commercial contact with Egypt, the Red Sea world and much of the Sudan.

However, the Mamluks intervened repeatedly in Nubian affairs, while Arab nomads constantly threatened the Nubian States.

Both Maqurra and Alwa were subjected to immigrating Muslim Arab tribesmen and traders and to growing Muslim minorities.  The long-term synthesis of Arabic and Nubian cultures moulded a new Nilotic Sudanese people and culture.

Its elite character was a significant factor in the gradual disappearance of Christianity in Nubia and its association with the Egyptian Coptic Christianity.

By the beginning of the 14th Century, Maqurra was officially Muslim although Christianity persisted briefly.

The Islamisation of Alwa came later, under the long-lived Funj sultanate that replaced the Alwa State from just after 1500 until 1762.

The Funj State flourished between the Blue and White Niles as well as north along the main Nile.

During the late 16th and 17th centuries, the Funj developed an Islamic society whose Arabised character was unique in sub-Saharan Africa.

A much reduced Funj State survived until an Ottoman Egyptian invasion in 1821.

The spread of Islam across the Sahara created a north-south religious and cultural divide in the western Sudan.

It halted when it reached the west African savannas and the forest areas where the societies in these southern zones maintained their traditional religious practices.

In these southern and coastal regions of West Africa, many States with distinct political, religious and cultural traditions had developed.

The forest kingdom of Benin reflects the sophistication of West African culture before 1500.

Its art, in particular, is renowned for its enduring beauty.

For millennia, the Edo speakers of Benin occupied the southern Nigerian region between Yorubaland and the Ibo peoples east of the Lower Niger.

Traditional Edo society was organised according to a patrilineal system emphasising primogeniture.

The village was the fundamental political unit while authority was built around the organisation of males into age-grade units.

Traditional Edo culture was closely linked to that of Ife, one of the most prominent Yoruba States north-west of Benin.

A distinct kingdom of Benin existed as early as the 12th Century, since an Ife prince was sent to rule in Benin around 1300.

The power of the oba (king) was limited by the Edo leaders, known as the ‘uzama’, an order of hereditary chiefs who invited the foreign ruler.

According to tradition, the fourth oba managed to wrest more control from these chiefs and expanded his ceremonial authority. In the 15th Century, under King Ewuare, Benin became a royal autocracy and a large State of regional importance. He rebuilt the capital, known today as Benin City, and named it and his kingdom Edo.

Ewuare exercised his sweeping authority in light of deliberations of a royal council, which he formed not only from the palace uzama but also from the townspeople, giving each chief specific administrative responsibilities and rank in the government hierarchy.

Ewuare and his successors developed a tradition of military kingship and engaged in major wars of expansion; to the west into Yorubaland and Ibo country to the east across the Niger River.

They claimed an increasing ritual authority for the office of oba that sanctioned more radical developments in the king’s role.

In the 17th Century, the oba was transformed from a military leader into a religious figure with supernatural powers.

Human sacrifice, specifically of slaves, appears to have accompanied the cult of deceased kings and became even more frequent later in the 19th Century.

Succession by primogeniture was discontinued while the uzama chose obas from any branch of the royal family.

After Arab invaders overran all of coastal north Africa in the 8th Century, they introduced Islam to the nomadic Berbers who gradually became Muslim.

As traders, the Berbers carried Islam to sub-Saharan west Africa.

From roughly 1000 to 1400, Islam in west Africa was a class-based religion with conversion inspired by political or economic motives.

By-and-large, rural people in the Sahel and the savanna regions and the forest people father south retained their traditional beliefs.

Conversion to Islam introduced West Africans to a rich and sophisticated culture.

Because efficient government depends on keeping and preserving records, Islam’s arrival in the region marked the advent of written documents in West Africa and accelerated the development of the West African empires of the 9th through to the 15th centuries.

The rulers of Ghana, Mali, Songhai and Kanem-Bornu, though appreciative of Muslim administration, wished to protect their kingdoms from Muslim Berber attacks and adopted Islam.

Some merchants, also wanting to preserve their mercantile status with the Berbers, also adopted Islam.

Consequently, those Muslim empires along the Niger River’s great northern bend evolved into formidable powers ruling over sizable territory as they seized control of the southern termini of the long distance trans-Saharan trade; a trade only made possible by the ‘Ships of the Desert’ – the camel.