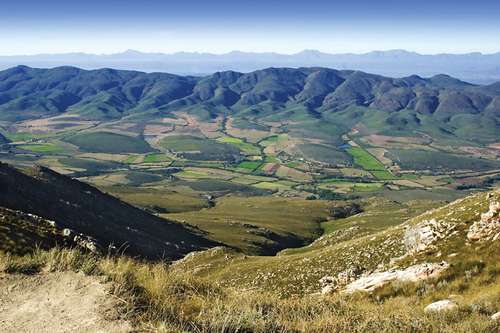 SINCE the ‘reserve’ was considered to ‘lack any distinct topographical features’, it was considered preferable to divide it into zones on a vegetation and soil basis and, as a result, five fairly distinct zones can be differentiated.

λ The Mopane Zone, covering an estimated 47 000 acres with very sparse grass cover, yellow mopane type of soils and the arable land just like the other four zones is in centralised blocks and under regular cultivation;

λ Jesi Bush Zone, a very dense thicket of approximately 15 000 acres in size, situated in the central part of the reserve on white sandy soils and its stocking situation was rather ‘on the heavy side’;

λ Renje Vlei Zone, of approximately 12 000 acres; is a flat depression in the central portion of the Renje River and was purely a grazing area;

λ The Msasa, Mfuti (Mupfuti), Acacia Zone, about 15 000 acres in size, situated on white sandy and grey silty loam soils in the central portion of the reserve east of the Renje Vlei, appeared to provide the best grazing in the reserve;

λ The banks of the Umniati River – a narrow strip zone of alluvial soils occurring along the river, extending to approximately 10 000 acres and often realised good yields.

The five major zones are said to be relatively flat and, as such, the reserve was hardly affected by serious erosion requiring the building of contour ridges in the arable lands.

However, this argument has been proved to be simply academic as most informants testified to being compelled to erect contours and maintain them in good condition – a very laborious and onerous task indeed.

An advertisement to encourage contours everywhere was often flighted by the Natural Resources Board (NRB) of Southern Rhodesia which suggested that: “Contour ridges slow down the flow of water in our fields.

They conserve the soil.

They cost money to build, but they save more.

Keep them in good repair.”

In a written message, while avoiding a direct mention of contours, which had become a sensitive subject, the vice-president of the Southern Rhodesia African Farmers Union at that time, said: “African farmers could show other Africans that farming is the best science in this world – it is giving and will continue to give to the starving world,…” and added that: “It was the duty of all farmers to fight erosion and put right what has been spoilt by rains in the form of soil erosion and other agents of nature.”

Was he simply being cautious and diplomatic in avoiding the subject of contours?

In fact, all the people in the allocated area had been warned regarding the completion of beacons and interrupted contours for which individual orders had already been given in terms of the Land Husbandry Act regulations.

Because the problem of erosion was of special concern to the Rhodesian Government ‘conscientising the natives on ‘the evils of erosion’ was prioritised, as it ‘…threatened the future of the agricultural industry and the national economy’.

Statistical estimates showed soil loss rates from arable lands in the country to be of the order of 50 to 80 tonnes per hectare per year.

It was argued, therefore, that at that rate of soil loss, ‘extensive areas of the communal lands will not be able to sustain even subsistence yields in three decades from now’.

Because contours were time consuming and entailed extensive labour, strong resistance to contouring was inevitable.

Many villagers, including Chief

Wozhele and some of Neuso’s people, refused to comply with the order to build contour ridges.  “If these things are necessary somebody else must do them not me,” declared the Chief, and challenged the Native Commissioner (NC) to take him to his farm to see if he was also digging the contours that he was forcing them to build.

He bluntly told the District Officer that: “You can take your gun and shoot me if you want, but I am not going to dig a single contour come hell come sunshine.”

Similarly, in the Ngezi-Mhondoro Reserve, as acknowledged in correspondence between the NC and the Principal Native Commissioner (PNC) of Mashonaland West: “A general order for the construction of interrupted contours on lands allocated last year (1960) was given on January 25 1961, to be carried out by May 1 1961.

To date, no effort whatever has been made to construct these and at the Assistant Native Commissioner’s (ANC) meeting several speakers intimated that they had no intention of doing so.”

Resistance against contours coincided with the countrywide opposition to the proposed increase in cattle dipping fees.

A report compiled by the ANC on meetings he held in the Sanyati and Ngezi Reserves to explain the increase revealed the rebellious mood that had gripped most of the rural constituencies.

According to the report, Sanyati is said to have received the imposition of dipping fees with a lot of calm:

“In Sanyati, the bad news was accepted philosophically and the only reaction was a request that collections be postponed to allow the people time to sell their crops.

In view of the extremely bad season these people have suffered, this request has been accepted and the dip fee collections have been arranged to commence on June 12 1961.”

The ANC further revealed that a similar postponement had been arranged for Ngezi-Mhondoro where collections were set “…to commence on June 19 1961.

However, deferring payment to a later date was not a solution.”

For Sanyati, this was the calm before a storm.

Nowhere in the country were such measures (that had the effect of impoverishing Africans) received without opposition.  Resistance assumed nationalistic proportions as the Native Commissioner’s ANC later testified in respect to Ngezi-Mhondoro: “In this Reserve, widespread dissatisfaction over the increase in fees has been expressed and I believe that there may be trouble when the time comes for the collection.

The people at Zimindo Dip have openly informed the Field Assistant that they will not pay the fee of 2/6 (2 shillings and 6 pence – about 25c) and that they will come to the collections with 2/- per beast only, countered the main speaker at one meeting”.

He was a kraal head in an area in the north-west portion of the reserve (that adjoined the Mhondoro Reserve of Hartley district) where considerable difficulty was experienced in1960 when land allocations were carried out.

His attack on the Government was vociferously applauded by the entire meeting.

Dr Michelina Andreucci is a Zimbabwean-italian researcher, industrial design consultant, lecturer and specialist hospitality interior decorator. She is a published author in her field. For views and comments, email: linamanucci@gmail.com