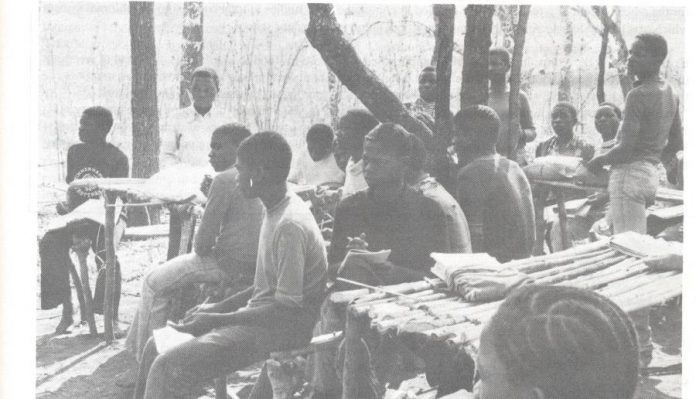 IN November 1978, together with Cde Mushatagotsi, the chief research officer of the Education Department (now current director of the Zimbabwe Foundation for Education with Production (ZIMFEP), Cde Vimbisai Rusununguko (now Dr Vimbisai Nhundu), I was sent on a mission to Dar-es- salaam, Tanzania for a one month course on Curriculum, Printing and Publishing at the Institute of Education.

I did not realise I was saying goodbye to Matenje Base for good.

We were still being prepared for transforming the education system after we came home, after winning the liberation war.

Victory was that certain.

The course on curriculum development was radical, it was in-depth.

It was while we were attending this course in Dar-es-Salaam that ‘ZANLA came to town’.

The front page of the papers in Dar-es-Salaam were ablaze with the story.

‘Salisbury is burning’ was splashed and flashed across the front pages.

The tanks, now an inferno emitting billows of smoke engulfing the skies, were a sight that evoked tears of joy in us.

We were jubilant, vanandugu, the Tanzanian comrades were ecstatic.

We were just about to go home, just about, we felt so strongly.

In December, we went back to Mozambique.

After the course, we felt so equipped to go home and do something special in education.

When we got back to Mozambique, I was assigned to remain in Maputo to work in the education office as personal assistant to the secretary for education and culture, Cde Dzingai Mutumbuka.

My time in the education office in Maputo was quite an experience.

I learned so much from Cde Mutumbuka.

During the time he spent with us at Gondola and Matenje camps, I had not worked with him so closely.

Cde Mutumbuka was a perfectionist, nothing less was acceptable.

Whenever I wrote something for him, be it a letter, a report, any document, it had to be error-free.

He told me, when I handed it to him, he did not need to correct anything.

It had to be perfect and all he needed to do was sign.

It was training for life.

He was punctilious and when you learned that lesson you could be at peace working with him.

Cde Mutumbuka could not work with a ‘Yes’ person.

This was so intolerable to him.

You were lucky if he did not shout at you.

He insisted you had to know your mind, to express it unequivocally, and to defend your ideas.

He always said he could not work with bandits.

Colonialists wanted Africans to be stooges as a sign of their subjugation and submission to the whiteman’s fascist rule.

Cde Mutumbuka wanted people to think independently — that he would respect, not otherwise.

This is what he taught me and all of us, and it was a cornerstone in his ideology on education.

This was such a special ensconcement for me that, as a teacher and lecturer (back here at home), I can never be at peace with students who regurgitate what they get from books and the internet without their own thoughtful input.

I cannot countenance students who repeat what I say in class without analysis or any reflection.

But with our learners schooled in the colonial tradition of passive learning and regurgitation, you do not become so popular sometimes; it seems too hard for them to think and analyse and come up with an independent position.

They claim that such an approach is a sign that a lecturer has no data.

What they want is that you fill their notebooks with ‘data’, which you dictate to them otherwise you do not qualify as a lecturer.

It is sad, tragic.

Cde Mutumbuka wanted to work with someone as a colleague, not as his object or stooge.

He allowed a person to grow.

He would listen to thoughts and ideas, agree or disagree, or praise if someone came up with something special.

I continued with my responsibilities in the research department.

These included receiving stories from the camps and the front, recording them and or processing them for publication in liaison with the Publicity and Information Department.

I still remember one of our happiest moments when we produced our very first publication from the education office ‘Buhera is Free’ – the story of Buhera as a liberated zone. There were other liberated zones by that time (end of 1978), but this was the first full story we had received and were able to publish.

Representatives of various organisations, as well as individuals, came to the education office to seek information about our education camps, sometimes also to understand our needs.

Indeed, it was a most especial ensconcement to work with Cde Mutumbuka and it contributed so much to my development, especially with respect to my own ideology of education.

In April 1979, Cde Mutumbuka had another mission for us, in pursuit of excellence in education, in preparation for the transformation of education in a liberated Zimbabwe.