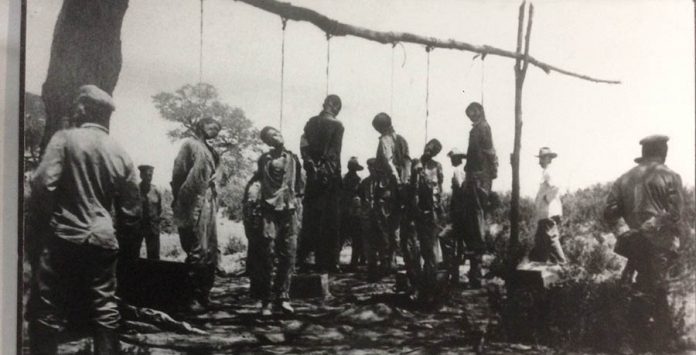 SLAVERY has manifested across centuries as genocide, colonialism, neo-colonialism and apartheid.

The 1815-1914 German-Herero War in Namibia, aimed at total annihilation of the Hereros, is one of the world’s bloodiest conflicts exemplifying serfdom across eras.

Just like when the Westerners arrived on the African continent to forcibly take the blacks as slaves, the Hereros of Namibia endured mass killings, slavery, loss of land and livestock, forced labour, concentration camps, medical experimentation, destruction of tribal culture, rape as well as  murder of women and children when the European powers moved to annex a new colony, South West Africa, in 1884.

The Herero genocide was supported by the October 2 1904 official policy of annihilation and Extermination Order in the same way slavery in America was legalised and supported by Fugitive Slavery Act until it was abolished by the Thirteenth Amendment to the United States Constitution.

Rachel Anderson (2005), in Redressing Colonial Genocide: The Hereros’ Cause of Action Against Germany, reveals that Germans slaughtered the Hereros, poisoned, tortured to death, trapped them in their huts and burned them to death as well as drove them into the Kalahari Desert to die of hunger and thirst.

Lieutenant-General Lothar Von Trotha’s (October 27 1904) correspondence confirms that the German-Herero War was intended to wipe out the Hereros.

Such level of wickedness takes the previous trans-atlantic evils to a higher level.

“As I see it, the nation must be destroyed as such ….I ordered the warriors… to be court-martialled and hanged and all women and children who sought shelter here to be driven back into the sand veld (the Kalahari Desert) …

To accept women and children who are for the most part sick, poses a grave risk to the force and to feed them is out of the question.

For this reason, I deem it wiser for the entire nation to perish.”

“Majesty the Emperor only said that he expected me to crush the rebellion by fair means or foul.

It was and remains my policy to apply this force by unmitigated terrorism and even cruelty.

I shall destroy the rebellious tribes by shedding rivers of blood and money.”

Such instances show that beyond slavery, Africans continued to suffer more abuse.

Rachel Anderson also reveals that the day after the Germans announced the Extermination Order; they forced 30 Herero prisoners, including women and children, to watch the hanging of the Hereros who had been sentenced to death.

The German officials read the Extermination Order to the prisoners, handed out printed copies and drove them into the Kalahari Desert.

According to Harring (2005) in, Redressing Colonial Genocide:

“400 Hereros, including women and children, died after being driven out into the Kalahari and denied access to water holes.”

Such treatment of fellow humans is not anything less than the African enslavement in the previous century.

Prisoners of war were placed behind double rows of barbed wire fencing and housed in pathetic structures constructed out of simple sacking and planks.

Thirty to 50 people were forced to stay together without age distinction.

Even after the Emperor withdrew the Extermination Order, the German colonial administration Imperial Chancellor, Prince Von Bilow, continued to decimate the Hereros by forcing prisoners of war into slave-labour and concentration camps in 1904.

The Hereros, serving as slave labour for railroad construction, died in huge numbers.

Vice-Governor Hans Tecklenburg commented on the high mortality rate in the camps in a letter to the Colonial Department as if Hereros deserved the evil sanctioned and carried out on them:

“The more the Herero people experience personally the consequences of the rebellion, the less will be their desire-and that of generations to come-to stage another uprising…. The ordeal they are now undergoing is bound to have a more lasting effect.”

The attitude was similar to that of  slave masters of old.

Killing Africans was an achievement worthy of recognition, the same way slavery was deemed necessary by Westerners.

Von Trotha, the perpetrator of the Herero genocide, was given a medal of honour by Emperor Wilhelm II.

The files of the colonial administration or Von Trotha’s correspondence with his superiors reveal that the administrative design and the military strategy was prefixed on the prejudice that Africans were primitive and not human.

There was also cruel movement of Africans in the Herero Genocide, just like in the Transatlantic slavery era.

“The magnitude of the European forced migration of enslaved Africans is in fact the genocide of a people.”

Jan-Bart Gewald, in The Herero-German War, writing about the export of Herero labour to the South African Ran,  points out that the Germans tattooed survivors, imprisoned and forced them to slave-labour and concentration camps.

Another similarity between slavery and the Herero genocide episode is that the perpetrators celebrated the killings.

Reinhartt Kossler (2012), in Genocide in Namibia, the Holocaust of Colonialis, argues that the Germans considered the Herero war aggressively as their own heroic feat; one military victory that they could boast of, after defeat in the First World War.

“Where a German man, fallen in faithful fulfillment of his duty to his fatherland lies buried, and where the German eagle has thrown his claws into – that land is German and shall remain German.” (Förster 2008: 211).

What makes Herero genocide similar to slavery is also, according to Schmidt-Lauber, the denialism or the tendency to ‘relativise’ historical events.

The mis-representations in the slave narratives in the West are also found in those chronicling the Herero Genocide, presenting it as an event which violated no law.

However, insider narratives from the New Era paper of 2007 reveals that ‘the genocide is a matter that affects everybody and touches all the Namibian people.’

The post genocide trauma suffered by the Hereros is similar to that experienced during the era of slavery.

What the Hereros experienced is no different from experiences by Africans captured, held in groups, bound by chains and transported to fulfil the unending thirst for labour abroad.