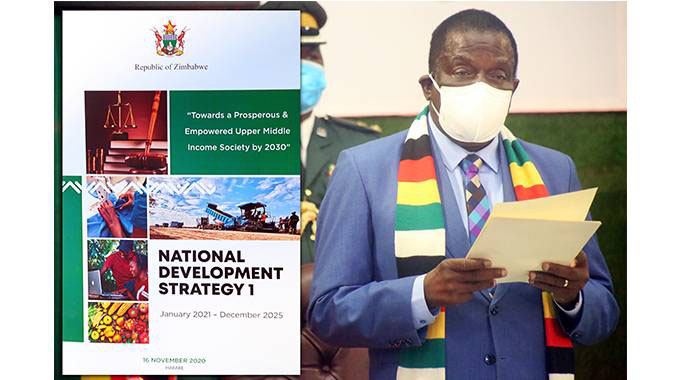 THE strategic planning of the new dispensation, with its proactive approach, has ensured progress in the country.

NDS 1 aims to fundamentally transform Zimbabwe in tandem with Vision 2030 of an upper-middle income economy by 2030.

The following is an expository of how, as a road-map, NDS 1 has blazed a trail of success.

Institutions like the World Bank and International Monetary Fund (IMF) have cut lines of credit to Zimbabwe, but local approaches used have gone a long way to strengthen macro-economic stability characterised by low and stable inflation, as well as exchange rate  stability, confirming that a nation can only be built by its citizens.

Economic stability is the absence of excessive fluctuations in the macro-economy.

An economy with fairly constant output growth and low and stable inflation would be considered economically stable.

Since the introduction of the foreign exchange auctions on June 23 2020,  the exchange rate has not been zig-zagging as it used to be.

According to the World Bank: “Continued implementation of disinflation policies and fine tuning of the foreign exchange auction market are expected to keep average annual inflation at two- digit levels in 2022 and 2023.”

No doubt, Zimbabwe is doing something about her situation despite not getting international financial assistance, especially from the Bretton Woods institutions.

In 2022, the economy is projected to grow by 5,5 percent, underpinned by higher output in mining, manufacturing, agriculture, construction, as well as accommodation and food services.

The 2022 growth projection is, however, subjected to risks relating to the future path of the pandemic and its impact on key sectors of the economy.

Annual inflation was on a downward path during the greater part of the year to 54,5 percent as at October 2021 compared to 471,3 percent recorded during the same period last year, underpinned by a tight fiscal and monetary stance.”

Countries with large GDPs have a greater amount of goods and services generated within them and a higher standard of living and Zimbabwe is inching towards that.

There are many instances to this objective, including the training of young people on entrepreneurship, launching of management training and focus on providing expertise in areas of business language, enterprise start-ups, ICT and innovation management.

For example, President Emmerson Mnangagwa implored players in the film industry to use their creative productions to change adverse perceptions and project a positive national image which promotes the country’s rich cultural heritage and vast investment opportunities.

Zimbabwe boasts almost 57 percent of women between the ages 20-31 with 47 percent of men in the same age bracket growing fruits and rearing livestock compared to other African countries where farming age boarders around 60 years.

Besides the business ventures, job creation has been significant.

The Permanent Secretary in the Ministry of  Information Publicity and Broadcasting Services, Nick Mangwana once tweeted:

“The  Zimbabwe  United Passenger Company (ZUPCO) has  created more than 7 000 jobs since the beginning of its revival programme in January 2019.”

Consequently, the projects that are going around in various sectors in the country have seen the hiring of many local men and women to take the jobs created.

Safe and affordable transport has been availed, including buses and the revival of commuter train services in Harare and Bulawayo.

As recent as December 1 2021, President Mnangagwa was commissioning Public Service Commission buses as a sign that the Government remains siezed with the welfare of its employees.

The Government expanded major traffic circles, such as Kuwadzana and Westgate, saying the initiative will ease congestion and reduce road traffic accidents.

The Mbudzi Interchange is another massive project that will transform the face of Harare while making life easy for motorists.

The Government took over 700 km of roads from urban local authorities which will undergo rehabilitation over a period of 36 months and has been rehabilitating major roads in Zimbabwe through the Emergency Road Rehabilitation Programme (ERRP).

Successful has been the reconstruction of the Harare-Masvingo-Beitbridge Highway, among many major roadworks.

More roads are being rehabilitated in Manicaland under the ERRP, with the Forbes Border Post Road, among others, also getting a facelift.

In order to deal with perennial water problems, the country has seen massive construction of water bodies such as Kunzvi Dam, Muchekeranwa Dam, Thuli Dam and Gwayi-Shangani Dam, among others.

In tourism, the country’s image continues to shine and Zimbabwe remains one of the safest destinations worldwide.

For instance, the number of new airlines flying into Zimbabwe has risen, connecting Zimbabwe to the world.

Air transport cannot be underestimated in the integration of the global economy and the growth of the tourism sector.

Not forgetting the vulnerable

No doubt programmes designed to protect the poor and vulnerable from shocks while reducing poverty are being spearheaded.

Children in difficult circumstances, persons with disabilities, the elderly and victims of drought are among those assisted.

Devolution funds are being availed to all the country’s 10 provinces for the construction of clinics, schools, roads and other related projects for the benefit of the people.

An amount of $10,9 billion has been set aside for capitalisation of State-owned Enterprises whilst $23,5 billion is earmarked for capacitation of line ministries in order to enhance public service delivery,”

The objective of promoting good governance is coming to fruition as evidenced by high levels of accountability, responsibility and transparency.

By way of investing in people, the Government continues to celebrate the Intwasa/Pfumvudza farming model initiated to assist communities to enhance food security at household level by assisting through inputs and relevant advise.

There is high internet penetration rate in the country.

Just as the internet is becoming the epicentre of global socio-economic transformation, the percentage population covered by networks is rising while the geographic network is also rising.

The Government is liberalising educational policies that support skillfulness of employees.

“In addition, science, technology and innovation are important catalysts to realise a high quality of life for our people.

Zimbabwe National Geospatial and Space Agency Building and Science park are important building blocks for addressing these realities and achieving the outcomes set out in the National Development Strategy 1 and ultimately Vision 2030.”

Indeed the NDS 1 is living up to expectation and the country is on course to achieving Vision 2030 of an upper-middle income economy.

Massive development is anticipated in 2022.