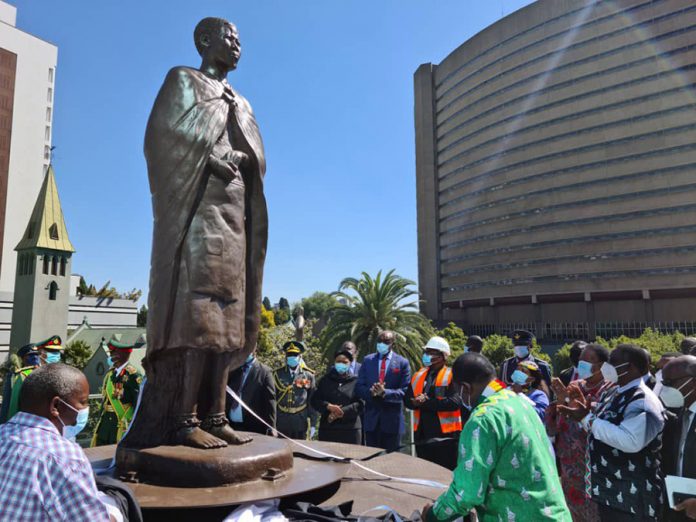 WE, Zimbabweans, do not have to go to the Oxford Dictionary to learn the definition of patriotism.

The path which led to the rebirth of Zimbabwe is inscribed in patriotism; it is in the air, in our history, present and past.

The path to Zimbabwe is strewn with flowers of patriotism, so is the path of the rebirth of the whole of Africa.

The late national hero Major-General (Rtd) Paradzai Zimondi, at the launch of the Zimbabwe Heritage Trust documentary, The Battle of Mavhonde (August 2017), in which he is featured as a living hero, said: “We of Zimbabwe have no lies to tell.”

Indeed, we have no lie to tell like the Americans who claim to have defeated the Vietnamese when in fact they did not.

We actually defeated the British usurpers who had seized our land by force of arms.

What defeated the British is the force of love for country and fellow countrymen, an unflinching love, an ultimate love which walked the entire mile, whatever the cost — as well as a just cause.

This is what brought Zimbabwe into being, after 90 years of bondage to the British.

At this juncture, it is propitious to reflect on patriotism because it is the 58th anniversary of the formation of the Organisation of African Unity (OAU), now African Union (AU), which came into being for the express purpose of securing the continent from the armed bandits from Europe. Europeans had divided the continent among themselves so they could plunder and loot Africa’s resources, relegating Africans to the margins.

Through its organ, the OAU Liberation Committee, African countries, with their limited resources, had one limitless resource, love of country, their Africa.

They sacrificed and put together the little they had.

But backed by their greatest moral force, a quest for freedom and justice for their motherland Africa, they triumphed.

What enabled these fledgling African countries to stand against the might of their former colonisers?

What gave them courage and strength was their love for Africa, their motherland.

They knew it was a perilous journey and, indeed, many perished on the way, but this did not stop the train.

In Africa, it is not preached, it is lived.

May 25 2021 was a special day for Africa and Zimbabwe in particular.

Zimbabwe took time to celebrate an icon, a patriot par-excellence, Mbuya Nehanda, by unveiling her statue in the heart of the nation’s capital Harare.

It is a great honour and privilege for Zimbabwe to celebrate this great icon, Mbuya Nehanda, on Africa Day.

Mbuya Nehanda, a patriot par-excellence, defied the whiteman even as she faced death at their hands.

They would dare ask her to ask for forgiveness from God for fighting the whiteman so that this God would accept her into Heaven after they had murdered her.

Mbuya Nehanda corrected them: “It is not I who needs forgiveness from God but you who have seized my country.” Her moral force was unquenchable.

She had the deepest love for her country and countrymen and she laid down her life for the people she led.

She died for the land she cherished.

They hanged her and she did not beg for mercy nor surrender. She accepted to die because that was the only way to have and to hold the land she was devoted to.

We are deeply grateful to Mbuya Nehanda who accepted to die for this excruciatingly beautiful land, our Zimbabwe.

Patriots are the forces who gave, and still give, Zimbabwe their all.

The seven gallant fighters of the Chinhoyi Battle knew they were no match for the Rhodesian arsenal, but they stood against the enemy, against helicopter gunships with an endless supply of ammunition.

Surrounded by the enemy, they did not attempt to run away or surrender.

They fought until the last bullet and for at least eight hours, the battle raged.

They knew they could not survive, but they fought for their land and accepted to die for their country.

There is no hardship too harsh for a patriot.

In the First Chimurenga, the whiteman had the Maxim gun which fired 600 rounds a minute.

He had the Mountain gun, as well as dynamite, while our people had rudimentary guns, assegais, battle axes and spears. However, the force of their love for their country pushed them to confront the British despite the huge disparity in the weaponry.

Although in the end our people had to make a strategic retreat due to the genocidal intent of the marauding robbers, they had made their point; they had wiped more than half the white population and the whiteman knew it was because of the sheer force of threat of genocide that our people were biding their time.

The Ndebele young chief warned them, but they chose to ignore the writing on the wall as documented:

“‘Where are we to live when it’s over? The whiteman claims all the land’.

The young chief shouted angrily: ‘You will give us land in our own country! That’s good of you!’

This is the mettle of Zimbabwe.

A patriot will never tolerate being dispossessed of his heritage by anyone.

In our history, in our war of liberation, angels walked the earth.

Children left the warmth and security of home for the liberation struggle.

Teenagers ran away from school and home to become freedom fighters and, though tormented so much, they never gave up their love for their country.

John Mbaira in Schools in the Struggle says:

“That consciousness made me to directly foot from Gokwe to Zambia.

Footing from Gokwe to Zambia is not a joke.

It’s more than painful and it needs much more than determination.

Thinking of it makes me cry.

I will never forget it.

So I went to the struggle with a full aim and knowing that life was not easy as what one might have guessed.

What I wanted was to get trained and become a freedom fighter.

Surely I was physically young but mentally mature.”

Who and what can defeat such force, such love of country?

With what shall we pay for such love and dedication?