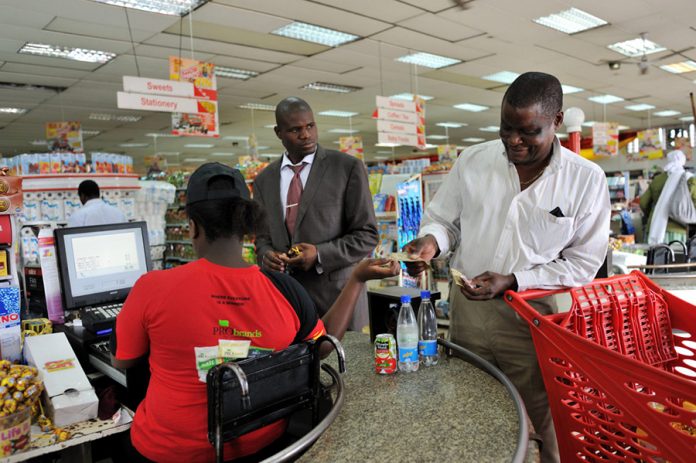 THAT title by one of my favourite writers was a favourite read during my High School days, prescribed text though it was.

In the book, the world is so technologically advanced that they have become too techno-dependent, even for the mundane tasks, until all hell breaks loose after some malfunction.

Confusion and chaos reign supreme as everything comes to a halt.

That could be a subject for another day, for I was really thinking of our economy and how currency seems to be driving all our commerce and general business operations to some kind of halt as it were.

The article was also written more than a year back just after the introduction of SI 483 when things were basically driving to a halt, but then, the symptoms are still there meaning the disease is not yet over and so we can still talk about them in the present tense.

In any event, I have done so many articles about money and will continue doing so until the cows come home.

Before colonialism, we did not use money as such, but engaged in barter trade.

Barter’s main problem was identified as that of the coincidence of wants, as each time you wanted to dispose of something, you would need to get somebody interested in your item first.

The introduction of money came in handy as an improvement on barter trade as it became a generally acceptable medium of exchange; store of value/wealth (savings); standard of deferred payment (zvikwereti);  and standard unit of accounting measure, Money 101.

Those who studied the economic history of this country will tell you that the colonials had to use force to introduce the money economy to the indigenes through including the introduction of hut taxes and forced labour, but once money got accepted for those Money 101 purposes, we swallowed the practice hook, line and sinker — ‘chakabaya chikatyokera’.

We even started engaging in magical rituals, including murder, to get money and sent our children to school to improve their capacity to earn it and change family fortunes.

But then, because yakauya nevarungu (money was introduced by colonials), our minds were generally not predisposed to creating it, save probably as traders and middlemen.

Before independence, all foreign money was of no value to us, and we called it all ‘mazuda’ from the name Suid Afrika written on South African money, and nobody wanted to have anything to do with foreign money that was not for local tender which was not considered of any value whatsoever.

I remember very well, in family businesses, the daring customer trying to slip it into normal notes and coins undetected, which often resulted in some thrashing if caught.

With the coming of independence, our children, who had  been in exile, returned in their thousands and gave us a window to things’ from abroad and how these were purchased through foreign currency, mazuda.

Again, we swallowed this hook, line and sinker and put our all into getting hold of it.

In my research with the University of Ottawa in December 1988, I identified Zimbabwe’s economic problem as one of accelerated integration into the international economic system.

This was designed to have access and control of our natural resources.

To achieve this, our Western friends used aid to induce us.

The aid facilitated and promoted subtle corruption, which was very alien to our psyche at the dawn of independence.

But this greed and selfishness would be favourable to their long-term interests over our resources and the same accelerated integration.

The Rhodesian pound and dollar retained a constant value, not because the economy was better managed, but because the majority of the economic actors had neither say nor influence on its value.

From the above, you can also tell there was no business dealing with mazuda and hence no threat whatsoever to the exchange rate.

Then, in came crossborder trading and mazuda, all of a sudden, gained prominence as unit of exchange.

There were the colour TV’s, VCR’s and other external electrical gadgets which added the affinity for mazuda.

The appetite for foreign currency further ‘climbed’ (Shona/ English) as the second-hand car market started to pick up and gain momentum in the 1990s until today.

All was well when all that people were interested in was just getting the foreign gadgets, until the people realised they could take advantage of their access to the zudas to make more money from those wanting access to them.

Then, everyone started trying to take advantage of the next person with justifications from such popular sayings as ‘Kakara kununa hudya kamwe’ (The fat cats gain their size from eating other animals); ‘Mbudzi inofura payakasungirigwa’ (A goat grazes where it is tethered —Look for looting loopholes wherever you are positioned) or ‘Mudzimi haupi kaviri’ (Fortune knocks only once on your doors).

This mindset sank so deep in our psyches to the extent our economy also started sinking until we lost our own currency by 2009.

The Machine Stops…, as it were, when all the comforts that go with using money came to a sudden halt.

What had just been otherwise accentuated integration into the international economic system became something else as we even adopted a currency otherwise reserved for international trade by other sovereign States.

Then we started all over again, as each goat started grazing where it was tethered!

The crisis started when people regained confidence in the banking sector, only for them to discover they had bank balances but no access to their money.

Then came in the introduction of Bond notes, which only ameliorated the situation for a little while as some individuals ended up with all the cash, while the rest held on to bank and mobile money balances only.

How did they access all the money while we held on to deposit balances only?

Kakara kununa hudya kamwe; hard earned money began being accessed at a discount from the cash barons and as things stood, EcoCash agents and other cash barons sold cash for mobile money transfers at anything between 15 and 30 percent discount.

You could, by now, be wondering what I am up to instead of writing on SI142 and all the monetary policy reform changes which is most relevant to us.

We will get there!

My idea was to set the background to some series of articles titled the ‘Machine Stops’ that would hinge on how to or not to descend into hell or a cul-de-sac as a nation.

In the series, we will be looking at what went wrong, what could go wrong and how to not go wrong for us to enjoy the comforts of a modern prosperous economy.

It will be a policy dialogue series in which all stakeholders will be given space discuss, for, after all, ‘Kukanya hurangana’.

In the Machine Stops…, there is doom and hopelessness as, one-by-one, all automated life malfunctioned.

We want to keep our own machine maintained and repaired timeously.

A stitch in time saves time!

There is light at the end of the tunnel.

I do not promise to entertain, but to provoke and get the reader into some ‘hard hat’ areas from time to time.

What this means is that the greedy and corrupt only survive among us in as much as we allow them to breathe among us.

To that extent, they only reflect our own decadence.

Charles T.M.J. Dube is an economist and social scientist who worked in the then Ministry of Economic Planning and Development at its inception at independence in 1980. He writes in his own capacity.