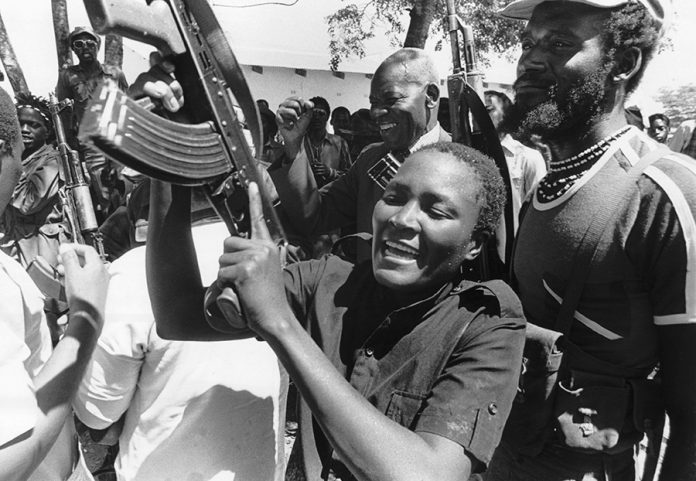 AUGUST is the month of martyrs, the month of heroes and heroines who fought, suffered and died for this country.

It is therefore a time for in-depth reflection about our country and one’s relationship with it.

And as you reflect about this dear most gracious land and when you are bathed by the love of the patriots who sacrificed for this land, something irks the mind, begs to be exposed for what it is.

There are those who never did anything for this land, whose only ‘credit’ is that they benefited from free university education brought by the liberation struggle. They became lawyers and now use these qualifications, made possible by others’ blood and sacrifice.

They now use these law qualifications to sue the very liberation struggle which made it possible for them to be who they are now.

They kneel before Bari, the foreign god, their British masters, working closely with them in a bid to return Zimbabwe to them on a silver platter.

If those who fought for this country and endured the worst that the British meted out to them, suffered the grossest war crimes perpetrated against them and yet remain quiet and reflective though they have not much to live on, how do those who have never done anything for anyone, who have benefitted so richly from the sacrifice of others, how can you be the ones who vow to destroy this land because the British offer you some pennies?

As far as we are concerned, the millions they have availed you and continue to promise you are pennies compared to the worth of this great land.

This spiritual edifice called Zimbabwe cannot be reduced to dollars and cents.

You are lost, you are not Zimbabweans when you become willing instruments of its destruction.

The MDCs do not impress anyone, we know who you are.

In 2018 you planned to steal the July 31 harmonised elections and you failed and plunged this gracious land into mayhem, into ‘warfare’, still you failed.

You had told your followers that it was a done deed, you had announced your ‘victory’ well ahead of the official results, breaking the law.

But breaking the law is not an issue with you, rule of law only applies to ratify the  pursuit of your illegal regime change operations.

You were so sure you had succeeded in stealing the election that you celebrated before the official results were announced.

However, the Zimbabwe Electoral Commission announced the correct results, loud and clear and your sand castle collapsed, throwing your followers into consternation and disarray.

ZANU PF, the people’s party, as always, romped to victory.

The British, where Zimbabwe is concerned, are desperate.

When they and their European relatives would not ratify the ZANU PF victory, it was because things had not worked as they had planned.

There is a problem with Zimbabwe, a problem they can never solve, something which permanently irks their mind: in Zimbabwe things never work out as they expect or plan or machinate and they never work out in their favour.

It appears this great country always has an ace up its sleeve.

All around the world the British and their American cousins have caused mayhem.

This British criminal interference in the internal affairs of the west African country led to the 1966 Coup which resulted in the Biafra War and millions of lives were lost.

But they could not pull this off in Zimbabwe.

Your ‘war’ of attrition did not engulf the whole country, lives were lost property was destroyed but it did not go far, it went nowhere near the bloodshed you had planned, there was no ‘Biafra war’ in our land. You failed… dismally.

It’s the month of August and it is the most propitious time to tell you why you failed.

It was a gruelling struggle, demanding sacrifice after sacrifice, thousands perishing in excruciating pain, thousands were blasted to death with dynamite and bombs, it is not possible to imagine a more excruciating way to die, hundreds were burned to death with napalm, they were scorched in chemicals and were subjected to untold pain from high velocity shrapnel.

From 1890 to 1980 the British carried out a brutal attack on our people and after 90 years the love and sacrifice of the sons and daughters of this land finally drove out the British imperialists through the barrel of the gun. From King Lobengula to Tongogara, we celebrate thousands of heroes who with their blood and sacrifice reclaimed Zimbabwe for us, these we celebrate this month of August.

And this August as we celebrate our heroes there is something more spectacular, Mbuya Nehanda is safely ensconced in our midst and this is sending shock waves among our enemy ranks.

This sacrifice of thousands counts for everything.

And how dare you, the MDC, the British and their European cry foul, in whose land?

We liberated ourselves from the British at the greatest expense possible so that we could chart our own destiny, what we do in this land is our own business. This is simple common sense but it seems the British and Europeans are illiterate, they can’t read this.

We have never sought to observe your elections in Britain, Europe or America, so what gives you the right to demand observing ours and determining whether we have conducted them correctly or wrongly.

That you spawned the MDC and you fund it to the tune of millions, line the pockets of its choir masters, does not change that thousands of our people willingly suffered and sacrificed their lives and livelihoods for this great country, Zimbabwe!

This is simple arithmetic: Hands Off Zimbabwe!

Panezvinoera muZimbabwe, the British murdered Mbuya Nehanda but the force that was generated by her ultimate sacrifice has become a permanent nightmare for the British.

It is what they feared most, an unending war.

There is no expiry date for this prophecy, it has been unfolding and there is no end in sight, greater and greater heroes pledge to serve this great country, to die for it whenever necessary.

Chamisa and bandwagon never got reconciled to the fact that they failed to steal the elections and in his buffoonery he took  the country to court for correctly granting ZANU PF victory.

There he made a fool of himself, it was quite a spectacle for a whole advocate to institute court proceedings without a shred of evidence.

So we sang during the liberation struggle but the British need to be reminded.

Where was rule of law when the British would not send troops against kith and kin when Ian Smith declared UDI in 1965.

Where was the rule of law when the British and Europeans assisted Rhodesia to perpetrate the most heinous war crimes against the people of Zimbabwe?

Where was the rule of law when the British robbed us of our land at gun point, surely armed robbery is utmost lawlessness?

Where was the rule of law when the British, their European relatives and American friends refused to honour the Lancaster House Agreement provision that they should pay for the land we were to repossess from their kith and kin?

Surely it is not the rule of law to build an empire based on grand theft and larceny, to be famed for building an ’empire’ on land and wealth stolen from others through untold bloodshed.

Chamisa lost the court case and you resuscitated your case against Zimbabwe because you did not have your way through lackey Chamisa.

There are things that are not done, you do not trash your history, the sacrifice of your people, and collude with foreigners to sell your own country for money and power.

Be warned: the living and departed heroes of Zimbabwe will hold you in check.