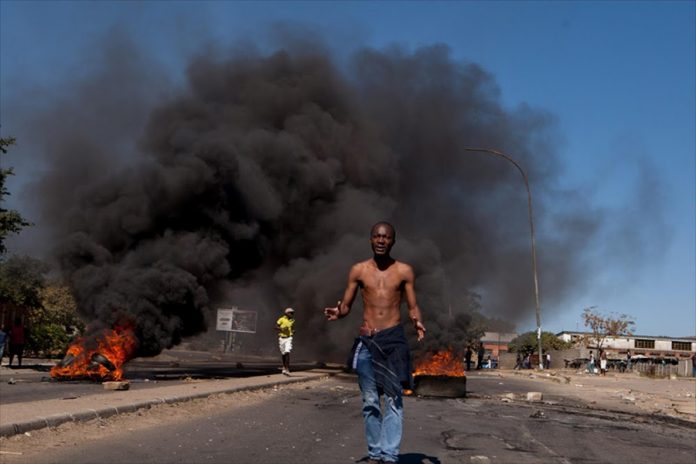 THE stunning exposure by MDC Alliance Bulawayo Province Women’s Assembly chairperson, Tendai Masotsha, of a plot by the party’s youths to bomb strategic Government buildings and other infrastructure was not only confirmation of the opposition party’s aggression but that its Western handlers are likely to resort to war against the country in future.

This comes as the US President-elect Joe Biden, on Monday, selected war mongers like Anthony Blinken into his administration.

Clearly, Uncle Sam is priming his administration for a foreign policy of aggression and regime changes across the globe.

On Tuesday, Zimbabweans woke up to an audio recording of a voice attributed to Masotsha, laying bare plans by one Tawanda Muchehiwa to bomb strategic buildings on July 31 2020.

Masotsha states in the audio that the MDC Alliance planned to wantonly destroy property and fake abductions to humiliate Government.

Throughout this year, this publication uncovered and exposed many similar plans by the opposition as it sought to drag the country’s leaders to the ICC.

Those plans, which were being sponsored by Western embassies and their ambassadors are still in motion and will be unleashed in the coming months.

There is no doubt that these startling revelations should cajole state security to take action against those implicated in planning terror against the country.

And action will be taken!

Let us hear what Masotsha said:

“I, Tendai Masotsha, would like to say, unless they want the whole family to be in soup, if they corner me I will reveal everything that Tawanda wanted to do on that fateful day.

Tawanda told me that he had 20 people who were waiting for instruction to burn Government buildings. Tawanda received money to buy explosives to burn down those buildings.

Amongst those 20 people, I did not see them (the 20 people), he was telling me that they were ready and he was pushing me to find a safe house and convince the chief to buy them food while they were carrying out their activities.”

“Unless if they want me to go public and tell the world that I was also afraid of what I was being asked to do, Tawanda knows that he wanted to burn Government buildings. I told (Jameson) Timba that if they continued to harass me, I am going to expose everything. If I am coming out, I am going to tell the world what Tawanda wanted to do. I don’t know how he got caught, maybe among the 20 people (there was an informant), he said there were some people who had guns and I couldn’t go along with him, I didn’t see those people, maybe they were foreigners.”

Permanent Secretary in the Ministry of Information and Broadcasting Services Nick Mangwana told The Herald that the revelations were ‘grave’.

“We are talking of very serious allegations of terrorism here. This is not the Zimbabwe we want. This is not how democratic disputations should happen. An unlawful use of violence against property to intimidate or coerce Government is a crime never to be tolerated,” he said.

While the usual MDC drama was playing out here, across the Atlantic, Biden was vowing to make the world ungovernable.

And his vow to prioritise his country’s shambolic foreign policy has the hallmarks of a country that is about assert its dominance on the global landscape.

Under the outgoing Donald Trump, the US had adopted an inward looking policy thrust.

Things are changing under Biden.

On Monday, Biden selected Anthony Blinken as his Secretary of State, an ominous warning for countries like Zimbabwe that have been at loggerheads with the US for more than two decades to brace themselves for more aggression.

Biden is no stranger to Zimbabwean politics.

He was a co-sponsor of the Zimbabwe sanctions Bill, the so-called, Zimbabwe Democracy and Economic Recovery Act (ZDERA) of 2001 that has all but brought the Zimbabwean economy to its knees.

SADC has repeatedly emphasised that the sanctions are affecting the  whole southern region.

Not many are convinced that Biden’s presidency will bring peace to the world.

“A US foreign policy run by Antony J. Blinken and Jake Sullivan, the likely next secretary of state and national security adviser, will mean more global interventions and regime-change operations, Clinton and Obama style,” says Szamuely.

“Blinken played a prominent foreign policy role in both the Bill Clinton and Barack Obama administrations, while Sullivan was part of the Obama one.

The Democrat-boosting media are, not surprisingly, excited by media-anointed President-elect Joe Biden’s choice of Blinken, his long-time national security adviser, as his Secretary of State. Along with his pick of Jake Sullivan, another close aide, as his National Security Adviser. These appointments supposedly signal restoration of ‘internationalism’ and ‘global partnerships’ as guiding principles of US foreign policy.”

The influential Washington Post has already given the world a glimpse of what Biden’s foreign policy is likely to be.

“Blinken will be nominated to one of the highest-profile Cabinet positions at a time when Biden is planning to prioritise foreign policy as a major pillar in his administration, with vows to re-assemble global alliances and insert the United States into a more prominent position on the world stage,” the publication reported on Monday.

“Soon after taking office, Biden plans to rejoin the Paris climate agreement, stop the US exit from the World Health Organization and resuscitate the Iran nuclear deal.”

“If Trump’s administration was designed to upset the pillars of government and global order, Biden’s appears aimed at rebuilding it with people who have held similar roles in the past.”

All those who tarnish the country’s image and plot to cause anarchy must face the full wrath of the law.

That day is coming.