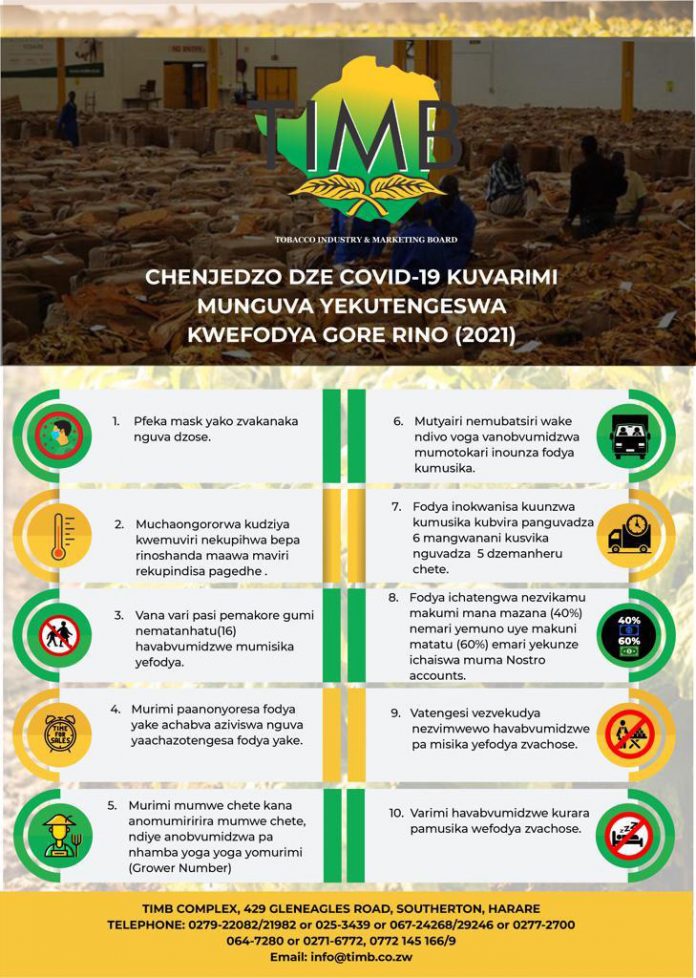 WHILE tobacco sales bring in immediate cash for farmers and a little more for the processors, more value must still be hunted for, for the benefit of farmers and the country.

This year’s tobacco selling season kicked off on April 7 2021, with the opening of the auction floors and the contract sales, which handle the bulk of the crop starting on April 8 2021.

The hope is that 2021 will be much better than 2020, where the average price was US$2,5 with about 183 million kilogrammes of the golden leaf sold.

Naturally, farmers are expecting a good price and believe they produced a high quality crop due to the favourable rains.

While the sales go on, it is time to consider other benefits besides the cigarette manufacturing companies in Zimbabwe, which are the major actors in exporting tobacco.

In value addition, raw materials move from farmer to the processor then to the retailer, to the wholesaler and finally to the consumer.

As a commodity goes up the levels, adding value along the value chain,so too does the GDP.

The broad definition of value addition is to economically add value to a product by changing its current place, time and from one set of characteristics to other characteristics that are more preferred in the marketplace.

Tobacco farmers ought to become more than commodity producers, absorbing all the shocks brought about by global markets in this transitional period of agriculture.

According to Zimbabwe’s  National Development Strategy 1, from 2021-2025: “During the NDS1 period, one of the major outcomes is to improve the performance of the manufacturing sector through value addition.

“It is in this context that the African Continental Free Trade Area (AfCFTA) could help transform the value addition debate in Africa. AfCFTA’s focus on intra-regional trade – as opposed to international exports – could provide the framework to build cross-border agricultural value chains.

These could link together production and consumption zones across Africa and process the commodities in the most efficient hubs.

Not only would this put Africa’s value addition industries on a more stable footing, but it could help integrate all the actors into the agricultural value chain, in particular the farmers.

This would make it possible to ensure that value addition industries not only add value to the economy but also that they transfer a fair share of this value to all participants in the agro value chain,” argues Edward George on disruptive technology and emerging markets, with a focus on sub-Saharan Africa.

Government takes “…advantage of this quick-win by engaging relevant and potential investors for tobacco cigarettes manufacturing so as to enhance value benefits to the country…,” said Finance and Economic Development Minister Professor Mthuli Ncube in the 2021 Budget.

Value-add models focused on local benefit could change the picture for tobacco production in the country.

This will give power back to the farmers and co-operatives, who will have an alternative market when prices and demand are low.

Countries that have prioritised value addition are earning much more than the producer nations.

Thus there is need for charting a course towards value addition given that Zimbabwe is one of the major producers of the golden leaf.

For example, Ethiopia also absorbs most of its coffee and at the same time sell some of it as quality value-added product.

It also ensures increase in export earnings as the products become more competitive on the international market.

For example, if medicinal drugs are made locally from tobacco, value can be realised locally too.

According to Science Daily 2021, tobacco makes medicines and that value can be realised at the primary area.

Led by Professor Mario Pezzotti at the University of Verona, scientists have succeeded in using genetically modified tobacco plants to produce medicines for several immune and inflammatory diseases, including diabetes.

The researcher presents results of successful work of tobacco as medicine for various ailments.

According to WHO report of 2019: eight such traditional medicines knowledge as exemplified above ‘used in the maintenance of health, as well as in the prevention, diagnosis, improvement or treatment of physical and mental illnesses,’ play an increasingly central role in global modern healthcare, particularly for chronic conditions like cancer, diabetes or chronic pain.

As our tobacco production continues to increase, it is necessary to look for avenues through which Zimbabweans can benefit more from producing the crop and cut the cycle of repeatedly providing raw materials to countries outside Africa.