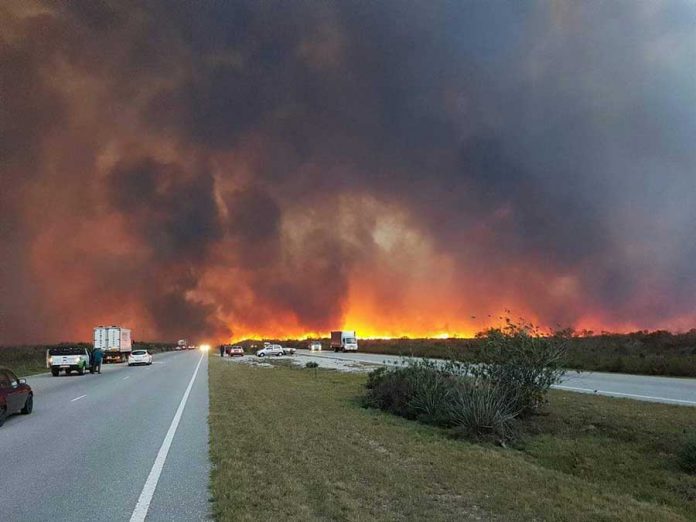 MANY districts in the country have been affected by uncontrolled veld fires over the years.

Veld fires, deliberate or unintentional, are fires that may get out of control and destroy the environment, property and lives. Over 102 lives have been lost due to veld fires in the last 10 years.

Every year, the second week of May is set aside for education and awareness-raising on the dangers of veld fires and strategies for their prevention.

The Environmental Management Agency (EMA) has been conducting awareness campaigns around the country with the aim of spreading the message on veld fire management preparations. The target audience being farmers and communities.

The veld fire season in Zimbabwe statutorily begins on July 31 and ends on October 31 each year.

The National Fire Week brings together key stakeholders such as traditional leaders, policymakers, civil society, corporates and many others as a way of raising awareness on veld fire prevention.

Fire outbreaks result in loss of agricultural produce leading to reduced availability of food for both humans and animals. Farmers in the past have lost their produce to veld fires, even those in storage facilities.

As the country celebrates the success of the 2020-2021 farming season, the importance of veld fire prevention has come to the fore. EMA’s Environmental Education and Publicity manager Amkela Sidange said that the impending veld fires were a threat to this year’s bumper harvests.

The year’s theme is: ‘Veldfires and Food Security – Protect The Harvest’.

Veld fires have become a priority in the National Development Strategy (NDS1), with a thrust towards their reduction.

Speaking at the launch last week, the Minister of Environment, Climate, Tourism and Hospitality Industry, Simangaliso Ndhlovu, said every citizen had a role to play in veld fire management.

The country seeks to reduce areas burnt by veld fires by not less than 25 percent.

“The 2021 veld fire prediction undertaken by my Ministry, through Environmental Management Agency (EMA), using biomass as indicated by the Normalised Difference Vegetation Index (NDVI) as a proxy for fuel load, and the previous fire behaviour as indicated by the burnt area in 2020, shows that the country is generally in the high risk (65,2 percent) to extreme risk (24,7 percent) of veld fires compared to medium (43,3 percent) to high (23,1 percent) risk in 2020.

“Following the heavy rains we received, there is high biomass even in areas that traditionally have low biomas, implying that the  country is highly vulnerable to veld fires in the 2021 fire season.

The provinces at extreme risk are Mashonaland West, East and Central as well as Manicaland, while the two Matabeleland Provinces, Midlands and Masvingo are this time around at high risk of veld fires.”

Speaking at the same occasion, the Mash West Minister of State for Provincial Affairs and Devolution, Mary Mliswa-Chikoka said: “Recurring veld fires, continue to threaten the Government’s efforts and programmes, of note Command Agriculture and Pfumvudza. This is a trend that indeed must be attended to — the war against unmonitored and uncontrolled veld fires must be won at all costs.”

Statutory Instrument 7 of 2007 of the Environment Impact Assessment and Ecosystems Protection Regulations states that it is an offence:

λ to pass by or drive by a veld fire without stopping to assist in putting out the fire.

λ to fail to report a a fire within seven working days.

Fires destroy both flora and fauna.

In case of a fire outbreak, it is advised to put it out the fire using beaters, tree branches or with wet sacks and dousing the flame with water. Communities have also been urged to have an agreed community fire alert system.

Fires can be controlled by the construction of fire guards. These are belts of land measuring at least nine metres in width on either side of a boundary fence and are cleared of all inflammable material.

Much still needs to be done to influence behaviour change in fire management.