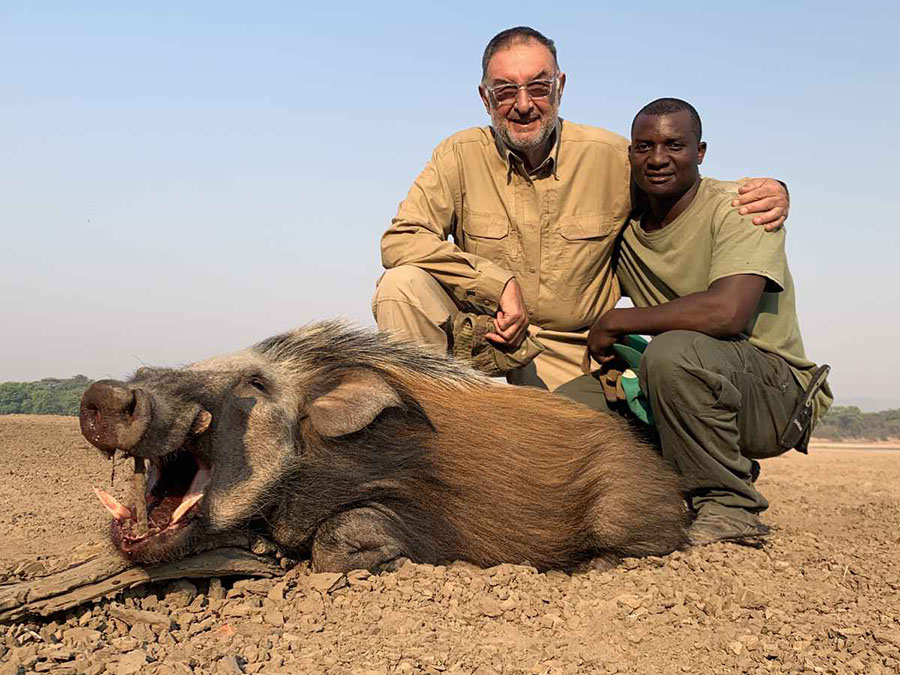 THE president of Zambia National Community Resources Board Association (ZNCRBA),

Therefore, Tembo said, the Boris John administration should not proceed with a Bill that would cause Zambian wildlife loss.

According to the British Government’s Environment Secretary George Eustice, the ban will apply to imports of hunting trophies from endangered and threatened animals worldwide, including Africa’s big five (lion, leopard, rhino, elephant and buffalo).

Tembo described the ban as “…not fair enough for us African hunting communities because international hunting revenue is adding value to wildlife and habitat conservation and socio-economic development.”

“If today we ban hunting, we will become poorer, lose both wildlife and its habitat,” he said, urging the British Government to discontinue the Bill that prohibits trophy hunting imports.

“The more we give people benefits from international hunting revenue, the more we can fight and reduce poaching.”

To prove this, Tembo said Zambia’s Sandwe Chiefdom ‘is a good example’ to demonstrate negative impacts of banning hunting.

“I can give you a practical example of our West Betauke Game Management Area under Sandwe Chiefdom located 500 km from the country’s capital city Lusaka, where Government banned hunting for five years and what happened is that we lost more and more wildlife and resources(natural resources) to poachers,” he said.

“We had no resources to pay community game scouts to fight poachers.

“We said this hunting ban is getting us nowhere.

“We must bring back hunting (which funds salaries for game scouts).

“Then we negotiated with the Government for the return to international hunting in our area.

“With hunting back, wildlife populations are increasing.

“We have elephant, antelope, kudu, crocodile and hippos.”

“In Sandwe community where I come from, it has supported about 17 community public infrastructures since 2016.

He said safari operators whom they work with have also improved and built different types of community infrastructure, including community game scouts’ houses.

“Agricultural inputs have been bought and people are having bumper harvests,” said Tembo.

“The inputs are drought-resistant and help vulnerable people to do farming.

“We are also coming up with lodges and fish farming projects using international hunting revenue as a way of improving community livelihoods.

“I absolutely want international hunting to continue because it really adds value to socio-economic development.”

The British Government is an active supporter of the UN Sustainable Development Goals (SDGs) that, among other things, seek to eradicate poverty, poor health and achieve environment and wildlife conservation in the next eight years by 2030.

Ironically, its Bill to ban trophy hunting imports which include Africa’s big five works against the key UN SDGs such as poverty eradication and environmental conservation in Africa’s hunting communities.

“Before being employed as a driver in Zambia’s Mulobeza Game Management Area in the elephant over-populated Kavango-Zambezi Transfrontier Conservation Area where Angola, Botswana, Namibia, Zambia and Zimbabwe share the same borders, I could not provide for my family needs,” said Reuben Shamabi.

“However, from the time I started this job, it has really improved my life.

“All my family’s socio-economic conditions have improved.

“My family is benefitting from my 15-year employment contract as hunting community driver.

“I built a house, bought cattle and household property.

“I pay for my family’s medical bills and I am able to send my children to school.”

These are the promising poverty alleviation signs in Zambia and other African hunting communities that the British Government is needlessly taking away. Therefore, if implemented, the trophy hunting imports ban Bill will contribute to the failure to achieve the much publicised UN SDGs by 2030.

International hunting benefits have been misrepresented to the British Government by the animal rights groups fundraising industry that it, like most Western governments, has tragically chosen to use as its reliable source of information on international hunting.

The British Government is a member of CITES.

Its move to introduce a Bill that bans trophy hunting imports suggests that it opposes CITES’ use of hunting as a scientific wildlife management tool.

CITES allows hunting of all wildlife, including endangered wildlife, as long as it’s not harmful to the hunted population and acknowledges hunting as a necessary wildlife management tool.

Hunting doesn’t have a detrimental impact on wildlife as only 0,5-3 percent of the population is hunted.

Old wildlife bulls that are no longer of reproductive value get hunted.

When the old male predators are no longer able to actively hunt their own prey, they start moving into rural communities for easy prey that includes humans and livestock.

That is the other reason such animals need to be cropped out.

According to the 1997 World Wide Fund For Nature Quota Setting Manual, the main purpose of a quota is to identify the number of animals that can be put down without reducing the population.

Normally, the off-take rate is fixed either equal to or slightly lower than the growth rate.

In this way, while the growth in population size may be slowed down, the total number of animals in the population does not fall.

The quota can, therefore, be considered sustainable.

Trophy hunting is often incorrectly confused with the poaching that is currently devastating many species, including elephant and rhino.

“We are also using international hunting revenue to raise community awareness on water and forests and the species in it,” said Tembo.

“This, together with hunting benefits is significantly helping to promote wildlife and habit conservation in Zambian hunting communities.”

Emmanuel Koro is a Johannesburg-based international award-winning environmental journalist who has written extensively on environment and development issues in Africa.