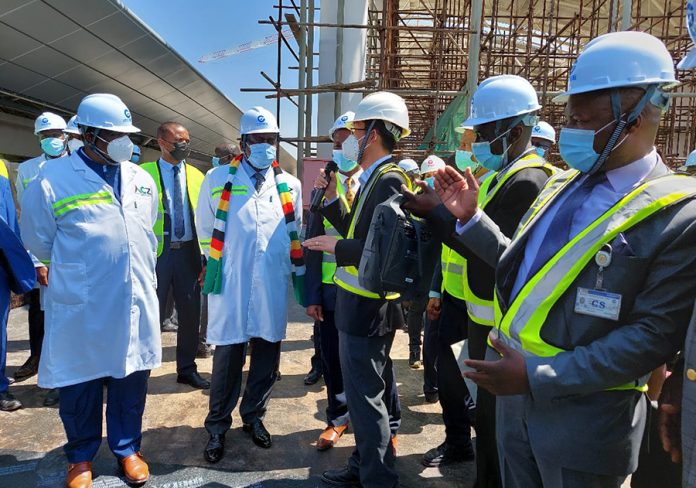 AS Zimbabwe’s unprecedented economic transformation continues to take the world by storm, the country’s enemies are once again upping the tempo through their latest efforts to scuttle that progress, with the US once again at the forefront of those plans to destabilise Harare.

The country has been on an economic revival trajectory that has seen all sectors of the economy being revamped and boosted, in the process receiving good reviews even from hostile entities like the IMF and World Bank.

The hive of activity in the economy, visible all over the country, has not been received well by the country’s erstwhile enemies who have embarked on a smear campaign aimed at diluting the ongoing progress.

Last week, the US, through its former Ambassador to Harare Brian Nichols, ‘successfully’ mobilised about US$100 000 for the Zimbabwe Coalition on Debt and Development (ZIMCODD), an outfit that is fully funded by Uncle Sam to launch a campaign called #HowFar, which seeks to portray the Government as having ‘failed’ to deliver on its electoral promises.

The ‘campaign’, led by a Janet Zhou, has been joined by other US-sponsored outfits such as Youth in Accountability and Governance (YAG) and Vendors Initiative, among other like-minded entities, has unsurprisingly been warmly embraced by one Harare-based ‘journalist’ whose offices or command centre are in Milton Park and fully funded by the US.

The plan is to portray the country as a pariah State where the economy is in the doldrums.

It also revolves on inciting ‘youths’ to revolt against a Government that has been leaving no stone unturned in its economic revival efforts.

Loaded with US dollars, the leaders of the anti-Zimbabwe campaign have been erecting billboards in high density suburbs where they believe they will gain traction among ‘angry’ youths while roping in artistes whose resentment of the country has not really been a secret.

Our sources say the programme will soon target tertiary institutions as it seeks to mobilise ‘enough’ numbers for the anarchy that is being planned.

“We will not stop asking critical questions #HOWFAR it is about holding those in public offices accountable from the President, to the councillors. If our questions are answered public services, infrastructure will be developed and rights enjoyed,” Zhou posted on Twitter last week.

We will get back to this shortly with appropriate answers.

Established in February 2000 and registered as a trust under Trust Deed No. MA496/2011, ZIMCODD has been relentless in its onslaught against Zimbabwe as part of the West’s regime change push.

We reproduce below ZIMCODD’s profile as published in this publication on December 19 2019 under the story ‘Church revives regime change agenda’:

“ZIMCODD made the headlines recently when it was revealed that it was training young people in Tanzania for banditry activities ahead of the Heads of States of Southern African Development Community (SADC) Summit.

To ‘legitimise’ the gathering, ZANU PF and Government departments were also invited.

ZIMCODD was on a mission to smear the country’s image at the SADC Summit by lobbying for Harare to be placed on the regional bloc’s agenda.

This is the summit President Emmerson Mnangagwa took over as chair of the SADC Organ on Politics, Defence and Security.

Well-known allies of the opposition were sought to poison the development through staging demonstrations and conducting seminars meant to set an anti-Zimbabwe agenda in the east African country.

The programme was running under the theme ‘Rebuilding People’s Movements within Southern Africa’s Climate, Political and Socio-economic Emergencies, Towards Radical Democratic Alternatives and Just Transition’.

The country has, however, in the recent past, witnessed so much activity that it is no easy to list in full the projects that are being implemented by the Government.

We will nevertheless give it a go with the following:

The Ministry of Finance and Economic Development says the Public Service Commission has so far distributed close to ZWL$9 billion in salary-based loans to civil servants under the Government Employees Mutual Savings (GEMS) Fund which was launched in February this year.

This has gone a long way in cushioning civil servants from the effects of COVID-19, among other challenges.

As part of revamping the health sector, Government has procured 100 fully equipped ambulances that will be distributed across the country’s 10 provinces.

Out of the 100 ambulances, the country has so far taken delivery of 30, with the remainder expected by year end.

The US$1,2 billion Hwange Power Station Unit 7 and 8 expansion mega deal which will add 600 MW to the national grid is 70 percent complete, says Government.

On devolution, Government disbursed ZWL$2,2 billion between January and June 2021.

Last week, the Midlands State University (MSU) announced it had embarked on an US$11 million modified coal tar plant that is expected to create 2 500 jobs and save the country 40 percent of the money it uses to import bitumen.

“Preliminary studies conducted revealed that there will be 40 percent cost-saving on road surfacing costs as a result of the new product developed by Midlands State University. The university has already patented this product through the African Regional Intellectual Property Organisation,” reads a report by the Zimbabwe Economic Review.

“This is a cost-effective and high-quality road surfacing material using 100 percent of locally available materials and expertise.”

On October 6, President Mnangagwa will commission Phase One of the US$300 million Beitbridge Border Post Expansion and Modernisation project.

There is so much more happening on the ground countrywide and the ongoing devolution projects are also testimony to Government’s commitment to improving the lives of the people.