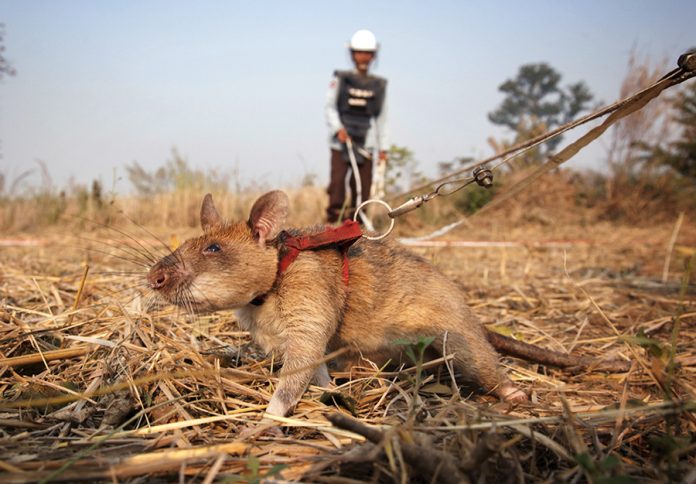 ZIMBABWE’s fight to de-mine areas littered by landmines left by the brutal Rhodesian regime could soon be speeded up using specially trained rats to sniff out unexploded landmines and other explosives.

This relatively new method was so successful in Cambodia that a rat, named Magawa, was recently given a Gold Medal for its ‘lifesaving bravery and devotion’ after having checked more than 141 000 square metres of land, equivalent to roughly 20 soccer fields.

Magawa is a giant African pouched rat with more than seven years of experience sniffing out unexploded landmines, helping identify 39 landmines and 28 explosives in Cambodia.

The award was given by a charity called the People’s Dispensary for Sick Animals (PDSA).

The PDSA first issued the Gold Medal Award in 2002 as a form of recognising animals that have displayed unmatched bravery, and Magawa happens to be the first rat to win an award as only dogs had been previously honoured.

Clearing landmines is a painstaking process often done manually, by hand, and some de-miners have lost leg and limb while trying to safeguard communities ‘in the line of fire’ so to speak.

This has resulted in dogs being roped in to identify spots with explosives, and, more recently, rats.

Zimbabwe could benefit from this new development, as the country has one of the densest and most active minefields in the world with up to 5 500 landmines laid per square kilometre.

More than 1 600 lives have been lost so far since the end of the liberation struggle, as people cross active mine fields to reach schools, clinics, farmland, water sources and their homes.

Zimbabwe is inching towards achieving a 2025 free of landmines, but these efforts have been hampered by the COVID-19 pandemic which resulted in suspension of many projects on the ground due to logistical challenges.

Magawa was trained by a Belgian firm called APOPO that has been training rats to find landmines over the past 20 years.

The group is currently working on de-mining projects in Cambodia, Zimbabwe, Angola and Mozambique to find millions of mines left behind from wars.

Many are keeping their fingers crossed that APOPO, which trained Magawa and hundreds of other rats to assist in de-mining efforts, will be able to replicate their successes in Zimbabwe.

According to APOPO Mine Action advisor Ashley Fitzpatrick, who took office in 2018, de-mining operations will likely kick off at the end of this year.

“We hope our fundraising efforts will come to fruition and we will soon be operational, we expect around the end of year,” wrote Fitzpatrick on APOPO’s official website.

The news of a rat winning a gold medal has gone viral, bringing attention to the devastating effects of landmines, a scourge that lingers on long after conflict would have ended, ravaging locals and tipping the balance of nature.

It is sad that the people who stand to benefit from this initiative have no clue whatsoever regarding the exploits of Magawa, a creature that is locally despised as being as destructive as the land-mines themselves in the eyes of the locals.

On a lighter note, if Magawa were to ‘escape’ and venture into the fields of Mukumbura or Rushinga where many have lost relatives and their beloved livestock, the rat would surely breathe its last at the hands of the people it is risking its freedom to protect.

According to statistics given by APOPO, over 60 million people in 59 countries continue to be threatened by unexploded landmines, and the number balloons when domestic animals and wildlife are taken into consideration.

APOPO chief executive Christophe Cox said the PDSA award will bring to the fore the issue of landmines and perhaps speed up fundraising efforts to combat the scourge.

Former British International Development Secretary Alok Sharma once put the effects of landmines into perspective when he said: “Landmines are indiscriminate weapons of war that maim and kill innocent men, women and children. Their devastation lasts long after conflict has ended.”

The Rhodesian regime was made up of descendants of the British who had vowed that black majority rule would never see the light of day in a thousand years, thus they booby-trapped huge tracts of land in an effort to stifle the efforts of the freedom fighters between 1976 and 1979.

Even though it has been 40 years since Zimbabwe emerged from a protracted liberation struggle, numerous communities, particularly close to the northern and eastern parts of the country, close to the borders of Zambia and Mozambique respectively, continue to live in perpetual fear of unexploded landmines.

According to official figures, Zimbabwe inherited over three million landmines when the country gained independence in 1980.

The Rhodesian military created lethal barriers along Zimbabwe’s borders with Zambia and Mozambique to keep freedom fighters at bay.

They also wanted to limit the movements of the civilian population, whose efforts in aiding the so-called ‘terrorists’ contributed to the victory of guerilla over conventional warfare.

The country’s land-mine contamination level is considered as ‘heavy’, according to Mine Action Review, suggesting that 20 square kilometres of land contain mines.

Zimbabwe is in the same category as Angola, Ethiopia, Yemen and more than a dozen other countries.

The only countries that are rated worse than Zimbabwe in terms of land-mine contamination are Cambodia, Iraq, Afghanistan as well as Bosnia and Herzegovina, with a rating of ‘massive’ translating to more than 100 square kilometres of mine contamination.

While some progress has been made in de-mining over the past 40 years, the battle is less than half-way won.

According to a survey by HALO Trust, a de-mining organisation helping the country to rid itself of the deathtraps, Zimbabwe’s north-eastern region is home to about 75 000 people in 87 communities adversely affected by active minefields.

HALO Trust is currently on the ground ridding the country of land-mines, and are working in collaboration with the Government and many other organisations in this effort.

The Norwegian People’s Aid (NPA) had earlier joined efforts to rid Zimbabwe of land-mines in 2012, working hand-in-glove with the Government to reclaim all mined areas under it’s jurisdiction.

The NPA hopes to complete their quota by 2024, and they estimate the land area as 11,9 million square metres.

It is everyone’s hope that residents in the north-eastern parts of Zimbabwe will be able to join the rest of the country in preparations for the farming season as the rains have commenced, and their livestock can move freely while they can also complete simple tasks without the fear of detonating a landmine.

For sure, if all join hands, a 2025 without land-mines is not a pipe dream.