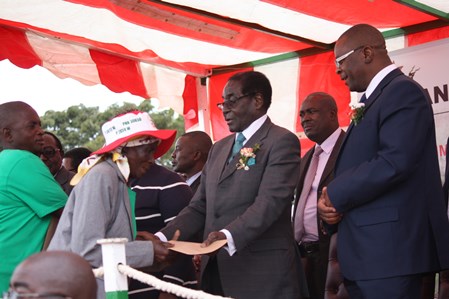 WHILE the recent completion of the re-drafting of the bankable 99-year lease document tackles one of the many hurdles that impeded success of the Land Reform and Resettlement Programme, the greatest challenge now is achieving maximum production on land.
Since the inception of the Land Reform and Resettlement Programme at the turn of the millennium, the initiative has faced one challenge or another, with sanctions proving the greatest hurdle yet.
Banks and funding institutions had adopted a wait-and-see attitude towards the newly resettled farmers, arguing they could not avail loans due to security issues relating to collateral.
Banks could not give loans as beneficiaries occupy state land which lending institutions cannot repossess in cases of default.
The 99-year leases were introduced in 2006 to give the new farmers security of tenure.
The Minister of Lands and Rural Resettlement, Dr Douglas Mombeshora, said Government and bankers had ironed out sticking points that previously made banks reluctant to accept the leases as security.
Dr Mombeshora said once the relevant processes are complete, farmers would be able to use the land titles to obtain loans from banks.
The re-drafted document was done in consultation with the Ministries of Finance and Economic Development, Agriculture, Mechanisation and Irrigation Development and the Bankers’ Association of Zimbabwe.
“The 99-year leases were introduced in 2006 and have been in existence since that time, but there were challenges in terms of securitisation of that document,” Minister Mombeshora said.
“We engaged the Bankers’ Association of Zimbabwe since 2014 and I am glad to say we finalised those discussions in March this year.
“We have ironed out all the issues that were raised by our financial institutions and we have just finalised redrafting the 99-year lease, incorporating the changes.
“We can gladly say it’s now a bankable document.”
Government has been working towards improving productivity on the farms with Vice-President Emmerson Mnangagwa, who is also Chairperson of the Cabinet Committee on Food Security and Nutrition, announcing recently that it is targeting the next four agriculture seasons in order to ensure food security.
Pursuant to ensuring that this is achieved, Cabinet has approved the Land Commission Bill in a bid to weed out multiple farm-owners, resolve land disputes and deal with land beneficiaries leasing out farms to those who are not entitled to them.
The land audits will be carried out by the Land Commission which is set up under Section 296 of the Constitution.
According to the Constitution, the Commission will carry out periodic audits and ensure accountability, fairness and transparency in the administration of agricultural land controlled by the State.
Will banks accept the 99-year leases?
Bankers Association of Zimbabwe president Dr Charity Jinya told a local weekly, The Sunday Mail, that: “We have been discussing with the relevant authorities the various aspects of the 99-year lease and have reached an alignment on the provisions.
“We now await further advice from the relevant ministry that we were engaged with.
“I would also not wish to pre-empt any announcement, but we have agreed on some issues to make sure that the 99-year lease project becomes a reality.”
It remains to be seen if the banks will live up to this undertaking.
But despite operating in a harsh environment, the new farmers have already proven their mettle.
A detailed research in 2010 by the Institute of Development Studies at the University of Sussex in the United Kingdom led by acclaimed agricultural ecologist Professor Ian Scoones, says newly resettled farmers have done reasonably well following the correction of the colonial imbalances.
The 10-year study, carried out on 16 sites in Masvingo, demystifies the Land Reform Programme which has been viewed in some circles as an abject failure and cause of food shortages.
Professor Scoones says: “Since 2000, the old dualistic agricultural economy, the inheritance of the colonial era, has gone for good and a new agrarian structure is fast emerging.
“This creates challenges and opportunities, winners and losers, but cannot be characterised as abject failure.”
The report says the Land Reform Programme was signified by notable developments where new commercial farmers defied odds, given challenges presented by hyperinflation and lack of credit lines because of the illegal economic sanctions that were imposed on the country by the West.
“While there has certainly been substantial damage done to the basic infrastructure of commercial agriculture operations in some parts of the country – perpetrated by both new land occupiers and formers – there has also been significant new investment; almost in all of it private and individual efforts,” reads the report in part.
“Settlers have also built new homes, 41 percent made from bricks, many with tin or asbestos roofing.
“A key investment has been cattle, with herds building up fast.
“Sixty percent have cattle on the resettlements, with an average herd size of five.
“They have also acquired equipment: 75 percent of households own ploughs, 40 percent bicycles, 39 percent own ox-drawn carts and 15 percent own private cars.
“This level of asset ownership is higher than comparable samples in the neighbouring communal areas.”
With the 99-year lease now bankable, it is time to maximise production and clear the path for economic development.
The rural economy has already adapted to the new phenomenon.
Let those with ears listen.