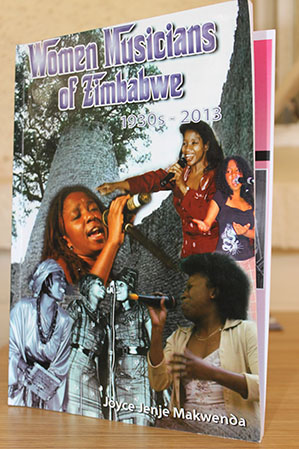 THE ground breaking book Women Musicians of Zimbabwe 1930s-2013 by Joyce Jenje-Makwenda is more than a celebration of the country’s female musicians.
It is, arguably, the first detailed and remarkable account of the journey that has been travelled by the female musician.
The detailed and enlightening book comes as no surprise as the author is not only an accomplished writer and researcher, but passionate about the arts.
Jenje-Makwenda delivers a vivid account of a journey that shows not only the abundant talent within the womenfolk, but an unbreakable spirit and never-say-die attitude that has enabled today’s woman to stand shoulder-to-shoulder with her male counterparts in the music industry.
In her fascinating chronicle of the development of the female musician Jenje-Makwenda points out how the coming of the white man and colonisation derailed the progress of the female musician in the country.
The author in her serious and poignant book shows how women, before the coming of the White man, partook in music not just as backing vocalists, but leaders and players of various instruments.
“Zimbabwean women sang songs to communicate, express their feelings or celebrate life changes. During pasichigare (pre-colonial times) women used the song to cope… Through music, women were able to put themselves at the centre stage of their communities,” she writes in her opening chapter.
The African tradition, the writer shows, did not segregate women involving them in all arenas, valuing their contribution to development.
“Some of the women musicians who led traditional ceremonies were also good at playing instruments,” writes Jenje-Makwenda.
“Some of the instruments that women played were mbira, marimba and drums.”
The book highlights how this musical journey by women was disrupted and setback by colonisation.
“However, due to colonisation and the so-called civilisation and Christianity, women no longer play some traditional instruments, particularly the ngoma (drum) and the mbira as this was regarded as un-womanly and barbaric,” she writes.
“Women were particularly discouraged from playing the small drums that are usually placed between the thighs.
“They were seen as unlady-like.”
The book brings to fore hitherto unknown pioneers such as Lina Mattaka and Evelyn Juba.
“Lina and Evelyn became the first women to be associated with jazz music in the 1930s,” writes Jenje-Makwenda.
“Their type of jazz was slow jazz which was influenced by Negro spirituals, slow jazz.
“Christian songs and traditional music.
“Evelyn Juba came on the music scene immediately after Lina and in the 1930s they were the only notable women in the popular music scene.”
She chronicles how in the 1950s women defied the odds with artistes like Dorothy Masuku, Victoria Chingate, Sarah Mabhokela and Mabel Pindurayi achieving fame.
“Dorothy Masuku composed and recorded more than any artist in the 1950s,” sayd Jenje Makwenda.
“She introduced new lyrics, new dressing and new stage work.
“Dorothy sang about shabeens, about fashion, about politics.
“Her lyrics reflected what was happening in the society in the 1950s.
“She did not toe the line, her lyrics reflected her feelings and not what the society wanted or expected to hear.
“Dorothy Masuku brought a new era and her carefree lyrics resembled the way women in pre-colonial era who expressed themselves through music.”
The book is a platform in which female musicians both past and present speak in a no-holds-bar manner expressing feelings that have not been captured so perfectly before.
Women performers insist that they are exactly what they are, musicians, and nothing more.
“I find that with a female musician you always need to remind people that I am not here to do a strip tease on stage, I am here to sing music,” said talented musician, Kudzai Sevenzo, one of the many female musicians featured in the book.
What comes out clearly is that women, besides concentrating and working on their craft, also have to contend with numerous forces especially a society that is not willing to accept, especially at conception of talent, that a female artiste is as good as her male counterpart.
“Music was taken as like a…, if you became a musician as a woman you were like a prostitute. People took you to be something funny you know,” explains Virginia Sillah who started her music career in the 1960s.
The narrative is an eye opener expertly highlighting every stage of how women musicians came to be.
The book enables one to understand and appreciate the immense contribution made by the departed and living women musicians of days gone by.
It is one narrative that will not only inspire young women venturing into music but a reading that will revive waning careers for women musicians.
Sources of inspiration in the book come in the form of characters like Stella Chiweshe, Beulah Dyoko, Ambuya Rena Chitombo and Elizabeth Ncube who broke down barriers venturing into traditional music playing the mbira, a sacred instrument only played by men then.
Professional women who were nurses like Sylvia Sondo of the famous all female troupe The Yellow Blues, Victoria Chingate, The Gay Gaities and Priscilla Sithole of Amakhosikazi showed that women were capable of establishing own groups and managing them successfully.
The narrative is balanced, rational and not a tirade against the injustices by men or society for example it celebrates men that supported their daughters and promoted the development of female artistes.
Men like the inimitable, late Andy Brown, TuteChigamba, a prolific mbira player in the 80s who toured the world and guitar maestro Louis Mhlanga are hailed for supporting their daughters, Ammara Brown, Irene Chigamba and Nomsa Mhlanga respectively.
These few words cannot do justice to this superb book, one simply has to read ‘Women Musicians of Zimbabwe 1930-2013’ to fully appreciate, understand and get a vivid insight as well as picture of the female musician in the country.
While the book tackles myriad issues, some of them complex, it is enjoyable, engaging and an easy read for both young and old readers interested not just in practical and factual information but beautiful writing.