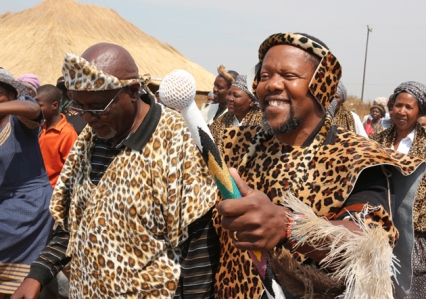 RECENTLY the son to the late controversial Ndebele paramount chief Khayisa Ndiweni, Felix Nhlanhla Ndiweni who wrestled the chieftaincy from his brother, circulated two petitions to his subjects urging them to support the shutdown of the Zimbabwe Republic Police (ZRP) and the Zimbabwe Prisons and Correctional Services (ZPCS) training depots in Ntabazinduna about 30 kilometres outside Bulawayo along the Harare Road.
In the two petitions, the chief wants the closure of the ZRP depot to make way for a vocational training centre, while the second petition is enlisting for the support for the expansion of Ntabazinduna on ZPCS land where he has already started illegally parcelling out land to his subjects.
The chief also set out a very absurd condition, that in case the two depots do not close, half the recruits have to be from his area.
In defending his position the chief said he was giving land to his people who were living in crowded areas, and the petitions were meant to seek support from these people.
“If ZRP says there is nothing to change, the chief will also not change on his position to have the depot closed,” he said.
“I am just giving you a warning.
“I will not let this thing go.
“This land has been barren and that is an error that needs to be ratified.”
What the chief seems not to understand is that there are plenty of farms in the region that are lying idle and his people could be easily resettled there.
His interest in security cantonment centres raises eyebrows and we are tempted to think there is a hidden agenda behind his actions.
On the recruitment of his young subjects into the police and prison services, it is an open secret that about 50 percent of young and able-bodied men and women in Ntabazinduna have all trekked to South Africa; therefore there are no young men and women to be recruited into the two forces.
Vice-President Phelekezela Mphoko is on record urging all the young people of Matabeleland to stay in Zimbabwe and work to develop the country, perhaps this could save as an important lesson to the chief.
Headmen and councillors tasked with circulating the petition said they are finding it difficult to explain to the people the meaning of the petitions as the demands which are being made don’t make any sense.
They claim the chief is out of touch with local governance issues after spending several years overseas and therefore suffers from a colonial hangover.
The police could not comment on the issue as it was a local government matter while the district administrator for Umguza Enetty Sithole said Government was investigating the matter.
Chances are high that the Ministry of Local Government, Rural and Urban Development can recall Chief Ndiweni.
His utterances also shocked Umguza legislator Obert Mpofu who urged him to stop anti-developmental agendas.
He weighed in on the chief’s questionable ascendency to chieftaincy.
The vice-president of the Chief Council, Chief Mtshane Khumalo watered down the issue when he told the Sunday News that the matter has not reached the Chiefs Council, adding that it was a sensitive issue that should be left to the people of Ntabazinduna to solve.
Chief Nhlanhla Ndiweni (52) spent 28 years in Britain before coming back to Zimbabwe after the death of his father Chief Khayisa Ndiweni who died in his sleep at the age of 97 at his Ntabazinduna homestead in 2010.
His installation as chief was also mired in controversy as he was supported by his mother to assume chieftaincy ahead of his brother Joram Ndiweni in contravention of their Nguni culture.
Joram also lived in England.
Chief Ndiweni’s assertions about the ‘land’ he claims to be his are just an echo of his controversial father Chief Khayisa Ndiweni who became a chief in 1939.
He was a leading figure in the Zimbabwe United People’s Organisation (ZUPO) party in the late 1970s, but left to found the United National Federal Party.
He attended the 1979 Lancaster House Conference in London where Zimbabwe’s independence from white minority rule was resolved.
He served as the Minister for Works in the government of Abel Muzorewa in 1979–80.
He became unpopular with President Robert Mugabe after he alleged Matabeleland region was being sidelined and underdeveloped.
At one time, he refused to meet President Mugabe at a hotel in Bulawayo, and instead ‘summoned’ the Head of State to his Ntabazinduna home.
Under the British influence Chief Ndiweni advocated a federal state at the 1980 Lancaster House constitution talks.
Chief Ndiweni wanted the separation of Zimbabwe into sub-regions, starting from Shangani River, this effectively meant that the Ndebele would be separated from the Shona, however, President Mugabe shot down the idea of a separatist state.
Federalism was also going to create a lot of problems and erode the gains of the liberation struggle against white rule.
Elders allege that the British had a hand in influencing the chief to push for a separate state so that they would remain controlling part of the country.
They knew very well that Chief Khayisa Ndiweni’s people came from South Africa and the British settled them in Ntabazinduna after the fall of the Ndebele state.
Political analysts said it was not surprising that his son was now singing the same tune and courting controversy like his late father.
The fact that he was in Britain for nearly three decades is self explanatory of a person who is being used by the same colonial masters to help them in their quest to effect regime change and topple a legitimate Government, after they failed to do so with the MDC.
Chief Ndiweni is a direct descendant of Gundwane Ndiweni, the first Ndebele paramount chief who led a Nguni splinter group, separate to that of King Mzilikazi, into Zimbabwe in 1838.
The group was later recruited by the British as general hands and also herded looted cattle until they were finally resettled at Ntabazinduna.