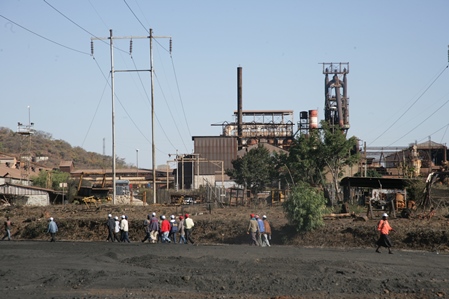 THE country marks the fourth year after the Government and an Indian conglomerate, ESSAR Africa Holdings, signed a mega deal that excited millions of Zimbabweans and the local industry, the revival of the Kwekwe-based steel-maker ZISCO Steel.
The deal estimated to be worth US$750 million was expected to resurrect economic activity not only in the small town of Redcliff, but the country as a whole.
ESSAR promised that it would create more than 6 000 jobs once the company re-opened.
The initial phase of the project involved the revival of ZISCO Steel to a production capacity of 500 000 tonnes of steel a year within 24 months which would increase to 1, 2 million tonnes a year in the second phase.
This was one of the biggest ever Foreign Direct Investment (FDI) deals that Zimbabwe clinched in the aftermath of the imposition of sanctions on the country by the United States and the European Union following a strain in political relations after the country embarked on the land reform programme.
The deal came after a number of attempts by other potential investors failed.
ESSAR came as a ‘Messiah’ to redeem the crippled ZISCO Steel and breathe life into Kwekwe but to date, nothing has changed; Kwekwe and Redcliffe still wait. It was all talk with no practical activities happening at the giant steel maker now rebranded New Zimbabwe Steel.
A visit by The Patriot to the company showed that nothing has changed at the steel maker, even the billboard with the company’s new name is almost falling apart before operations have begun.
There is nothing at New ZimSteel.
Touted as Africa’s second biggest steel producer after South Africa at its peak in the 90s, operations remain at zero.
Smoke from the huge furnaces has not been seen for many years now as the firm remains a shell of its former glory.
The 4 000 plus workers have been reduced to scavengers.
The company is now being described as a museum for those interested in history.
The number four blast furnace which used to operate 24 hours producing thousands of tonnes of steel per day has become a breeding ground for rats.
Industry and Commerce Minister, Mike Bimha has called for patience in the revival of the steel giant, but economists and industrialists believe resumption of operations is long overdue.
The continued closure of New ZimSteel beyond doubt has contributed to the delay in getting the economy back to the highs of the 90s.
At its peak, ZISCO Steel was the mainstay of the steel industry and other downstream industries. It was the backbone of Zimbabwe’s economy.
Since its closure, companies mainly those involved in the production of steel products have been affected, forcing them to downsize and others to completely close shop due to lack of cheaper raw-materials.
The collapse of industries in Bulawayo can be linked to the demise of ZISCO Steel as almost 50 percent of the city’s companies relied on processing steel from Redcliff into various finished products.
About 100 companies in Bulawayo have closed shop or relocated in the last decade.
Even parastatals such as the National Railways of Zimbabwe (NRZ) which used to derive about 60 percent of its cash flow from transporting various products destined to and from ZISCO Steel have suffered.
The closure of the company saw the figure of tonnes ferried by NRZ, at its peak in 1998, dwindling from 18 million tonnes to 3,7 million in 2011.
Without doubt, resumption of production at New ZimSteel will significantly jolt the country’s manufacturing sector and economy. The construction industry will definitely benefit from the steel-makers revival.
Most players in the economy have been forced to import steel-related products like iron and iron bars which they once used to acquire locally and cheaply, a situation which is straining the bottom-line.
Pundits contend that the rejuvenation of the steel firm will open doors for other investors to come into the economy.
Steel Makers Limited group general manager, Alexander Johnson said the closure of ZISCO Steel has forced them to operate at below capacity due to lack of cheaper raw materials.
“Our company relied on ZISCO Steel for raw materials and its closure has made our operations and production costs more expensive as we look for other alternatives,” said Johnson.
“At the moment, we are being forced out of the market as we are struggling to withstand the completion from imports that are low priced.
“As such, without ZISCO Steel, our production cost per unit remains high making our products uncompetitive on the market.
“The re-opening of ZISCO Steel will bring us back to being a profitable business as we will have access to cheaper raw-materials.”
Since the signing of the deal, there continues to be conflicting stories about progress and efforts being made to operationalise the New ZimSteel.
There has been a change of government ministers in charge of the deal, a lot of feasibility studies and preparatory works have been said to be taking place at New ZimSteel.
However, the story remains the same, there is nothing happening at the company, as far as the ordinary man and woman is concerned.
As for former ZISCO Steel workers, the suffering continues.