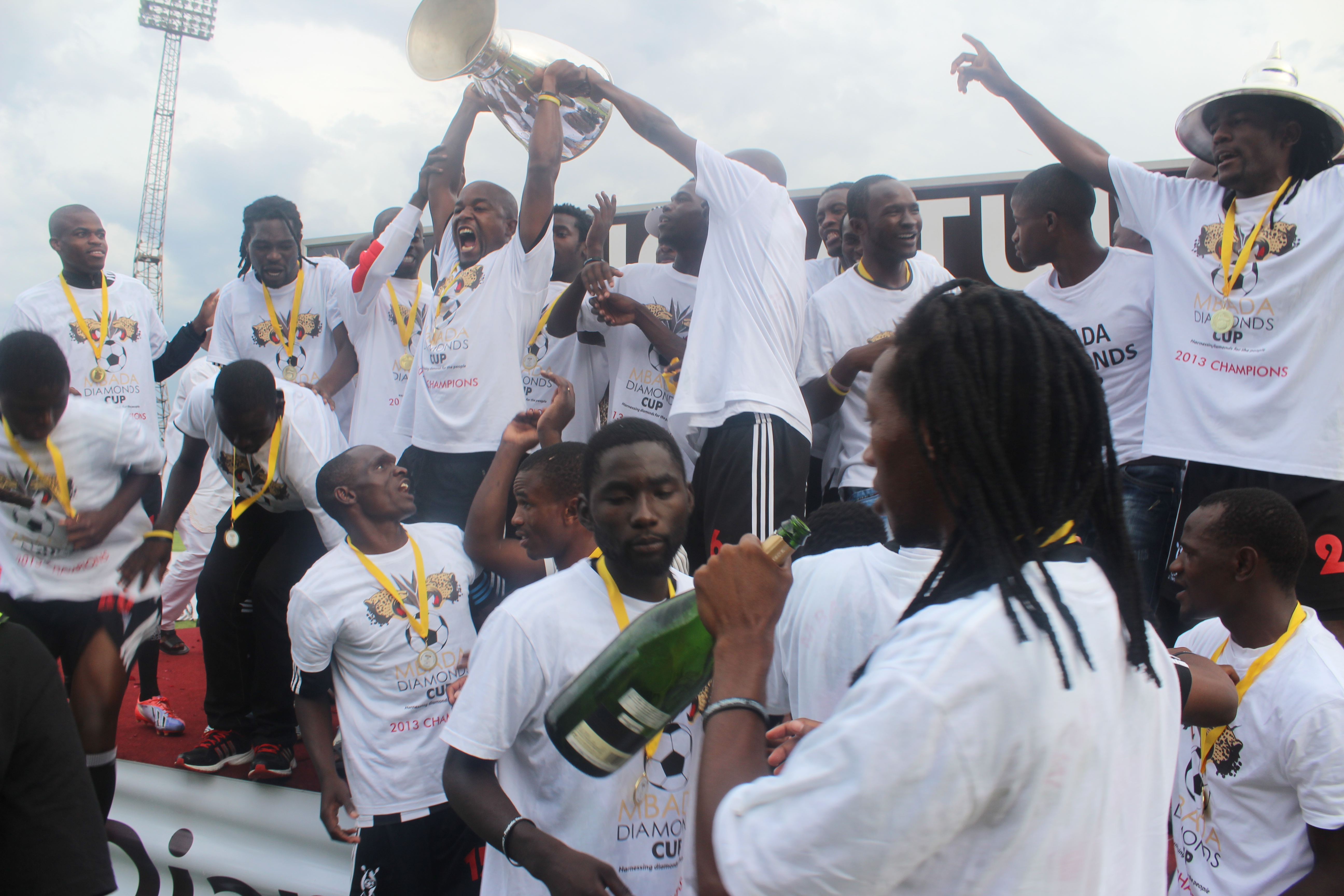 HIGHLANDERS made their first sweet victory against the so-called giant killers, How Mine this year with an emphatic 3-0 victory at Barbourfields (BF) Stadium last Saturday in an explosive Mbada Diamonds Cup final.
The packed final was all Highlanders needed to finish the season in style after pocketing the US$130 000 prize money.
The money is more than the Premier Soccer League’s pay cheque for the championship.
However, Highlanders will not benefit from the African Safari subsidy as the Bulawayo giants are still serving a ban from all Confederation of African Football (CAF) competitions.
The match lived to its billing with two goals coming in the first half. The final had everything to play for as the pay cheque was hefty and the turnout of the supporters did not disappoint while the one dollar per head paid dividends.
More than 30 000 fans came as BF recorded one of its biggest crowds.
No doubt the final was exhilarating for the thousands of Bosso fans.
The Bulawayo giants have been playing second fiddle to the league champions Dynamos in the past two seasons and the Mbada Diamonds Cup is a big relief to the success starved Highlanders.
The diamonds cup was Kelvin Kaindu’s first silverware with Highlanders.
The Zambian coach has decorated his resume with the lucrative Diamonds Cup.
The cup glory also did the former Bosso player the favour as he negotiates of extension of his contract.
Although the gaffer did not want to shed light on the contract with Bosso, the Diamonds cup has improved his chances of returning for the 2014 soccer season at the helm of Highlanders.
In a post match interview, a visibly joyful Kaindu said he had proved his critics wrong by lifting the coveted cup.
“I am glad therefore that we managed to lift this trophy because there were some people who were saying we are unable to win anything and we keep coming second,” said Kaindu.
Highlanders won the match in the midfield where Peter ‘Rio’ Moyo – Man-of-the-Match, reigned supreme.
His ball control and dribbling skills made him a thorn in the flesh for How Mine midfielders.
The How Mine defence was also troubled by veteran Highlanders striker, Njabulo Ncube who scored the first goal of the final.
Ncube was difficult to contain for the How Mine central defence. Partnering with Gabriel Nyoni upfront, the two caused all sorts of problems for the ‘Chikurupati’ (How Mine) defence.
Ncube had the audacity of missing two clear goal scoring opportunities.
Action was concentrated in the How Mine half and the first goal was no surprise while the second drained all the vigour from the How Mine players.
Trailing 0-2 by halftime, How Mine showed signs of coming back, but the Bulawayo giants scored a third, killing off the game as contest.
Njabulo Ncube, Masimba Mambare and Peter Moyo scored for Highlanders.
It was a good game for Munyaradzi Diya as he made three brilliant saves for Highlanders.
No doubt the Highlanders number one is one of the soccer stars.
Highlanders’ class of 2013 bridged the seven-year silverware drought that Bosso had endured.
The Mbada Diamonds Cup was also good for the local Highlanders’ fans who last saw a derby final in 1988 when Zimbabwe Saints and Highlanders locked horns in a final of the Rothmans Shield.
Highlanders then won 1-0.
The carnival atmosphere that engulfed Barbourfields was magnificent.
Soccer lovers from all walks of life graced the stadium and no doubt, the Mbada Diamonds Cup made a lasting impression on the Bosso fans.
Several Bosso supporters could not hide their joy.
“I am happy with the guys for putting a smile on our faces,” said Khumbulani Dube from Makokoba.
“It has been long since we celebrated for winning a cup here at BF.
“I really want to thank Kaindu for delivering this time around because we really wanted to win this.”
Sadly after the match, it was a big running battle for the fans and police.
Scores of Highlanders fans descended onto the pitch as the frenzy caught up with them.
Some scaled the perimeter fence into the pitch and had to be chased by the Police.
In the process, some police dogs had a ‘feast’ on overzealous fans who had invaded the pitch.
The kind of joy displayed by the fans was clear testimony of the seven years of drought.
But the stadium owners will have some work to do on the vandalised perimeter fence while for others, dog bite scars will make them remember the derby final with visible evidence.
What is left now is for Highlanders to regroup and focus on next season.
For How Mine, it was a learning curve as their gaffer, Philani Mabhena said after the match.
How Mine’s immediate task will be conquering Africa.
However, the international arena will not be a bed of roses for them although they have some players who have played in the African Safari before.
Hebert Dick, Gilbert Banda, Ephraim Mazarura and Menard Mupera have played in the African Safari before.
Their experience is therefore expected to guide the team as it seeks to raise Zimbabwe’s flag high in continental football.