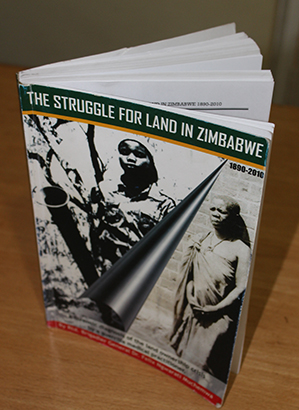 WHEN I say that Rtd Brigadier-General Muchemwa’s book is the first real insider view or reaction to the land question in Zimbabwe, I know I risk immediate reprisal from some quarters.
Nonetheless, I wish to maintain this stance because my understanding of ‘insider’ is obviously different from that of my imagined quarter.
I admit that fellow Zimbabweans, the likes of Sam Moyo, Brian Raftopoulos and others have written extensively about the land question, but the question that separates these liberal academics from this war-tried-and-tested guerrilla-turned professional historian is that of sensibility, scope and depth.
You just need to ask the competing voices basic rhetorical questions to see the distinction: Are you a Zimbabwean by passport or birth-right?
When you set out in search of history, whose spirit goads you?
Whose sensibility conditions your selection and interpretation of historical content?
Who are you writing for and to?
If you are not a voucher writer, then you can stand to be counted among insider historians of Muchemwa’s standing and your contest to equal measure is then welcome.
This book presents an insider insight into a whole panoramic build-up of events leading to the land problem in Zimbabwe; all the way from pre-colonial political formations (the Mwenemutapa Empire, origins of the Ndebele Kingdom, preparations for colonial occupation of Zimbabwe) through colonial dynamics (the occupation, conquest of Matabeleland and Mashonaland, legitimising of looted land, the struggle for land reclamation and the Lancaster Constitution) to independence and continued post-independence struggles for the return of the land to its rightful owners; all told with a fine toothcomb.
There is no doubt no such book has been able to stitch the events of this long colonial adventure with such simplicity and clarity as this one.
What we have witnessed in the past is detailed description of pockets of history, selectively done to deliberately hide or distort the causal connection between events.
Treating historical events in isolation is part of the post-modernist and post-colonial projects of empire, seeking to silence the crimes of the white colonial monsters in liberal cheap-talk.
All these machinations are casketed in deconstructionist narratives which falsely present events as independent units of time.
Even History syllabuses that our children have been subjected to at different levels present historical epochs in a discrete manner; and our children are trained to become champions of analysing these texts without ever noticing the connection between events.
And once they miss the thread in the continuum of time, their history, they become alien to the forces that authored their current conditions of deprivation, want and desperation.
And because they are blind to the hidden hand of the enemy, the only enemy they see is themselves or their parents or their ancestors or their fates even.
At worst they begin to see their own oppressors as potential liberators from the quagmire of poverty to which they have been condemned by such oppressors.
Such is the duplicity of ‘predators and destroyers’.
In the absence of light, children grope in the dark.
Muchemwa’s book heralds illumination to the blinded generation.
It is a trailblazer in rejecting a piecemeal approach to the land question.
It situates the matter in the totality of time, showing how events lead to the next events in that concatenated order; thus empowering our children with a global picture of wiry nature of our tormentors.
This way the book exposes post-modernism, post-colonialism, deconstruction and liberalism.
In a sense it is correcting lies that were mistaken for history and telling the story of Zimbabwe from the victim’s point of view; laying bare the fact that the land question in Zimbabwe has always been and remains at the core of Zimbabwe’s political, economic and social agenda and that indeed now as in the past, it remains the root of the political tension within the country and erstwhile colonial power, Britain and its allies.
Zhuwarara’s observation in the preface to The Struggle for Land in Zimbabwe 1890-2010 exposes with chilling detail the moral accountability weighing heavily on the battered images of the hypocritical whites and those they fund to peddle the lie that the victim can live in amity with the children of those who massacred their ancestors in the name of liberal Christian values and love of democracy.
No.
Zhuwarara’s rhetorical moral questions can be rephrased as follows:
In what way can violent conquest of a people’s land ever stand the test of any morality serve that of the Devil?
How moral is converting land ownership founded on the abuse of one section of humanity into an exclusive and inalienable human right for another section of humanity?
How moral is the impoverishment and enslavement of the blacks in Zimbabwe to give way to the inalienable rights of the colonising white settler community?
How is it possible to convert a human right of conquest into a human right for the conqueror?
And finally in what way is the reversal of the crime committed against fellow humanity considered an infringement of white settler human rights founded on that crime?
Muchemwa’s book asks these questions throughout.
It reminds the reader that Zimbabwe is where it is because of those things that have not been said before.
Earlier historical books have indeed been silent about critical events that this book excavates.
It is true that the book is so far, “the most comprehensive story of the struggle for land ownership in Zimbabwe, told with a scope and depth that has not been witnessed before”; thus making it a first choice study text for Zimbabweans at all levels of education and all those who desire a fuller and more accurate rendition of the struggle for land in Zimbabwe.
Indeed in this masterpiece Muchemwa dares where the angels fear to tread.
In Part Two special attention will be given to historical linkages and insights which Muchemwa has redeemed from the morass of colonial hibernations.