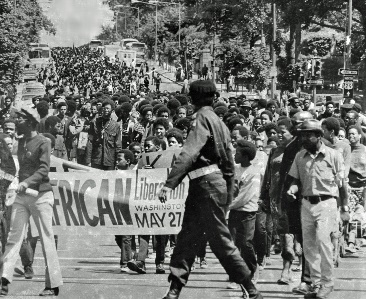 TO many people, Africa Day or May 25, is just like any other day or a public holiday that allows them to relax at home or in pubs with others.
It has just become another public holiday.
Its true meaning now lost in the mists of time.
“On the question of racial discrimination, the Addis Ababa summit conference taught, to those who will learn, this further lesson: That until the philosophy which holds one race superior and another inferior is finally and permanently discredited and abandoned; that until there are no longer first class and second class citizens of any nation; that until the colour of a man’s skin is of no more significance than the colour of his eyes; that until the basic human rights are equally guaranteed to all, without regard to race; that until that day, the dream of lasting peace and world citizenship and the rule of international morality will remain, but fleeting illusions, to be pursued but never attained.
And until the ignoble and unhappy regimes that hold our brothers in Angola, in Mozambique and in South Africa in sub-human bondage have been toppled and destroyed; until bigotry and prejudice and malicious and inhuman self-interest have been replaced by understanding and tolerance and good-will; until all Africans stand and speak as free beings, equal in the eyes of all men, as they are in the eyes of Heaven; until that day, the African continent will not know peace.
We Africans will fight, if necessary and we know that we shall win, as we are confident in the victory of good over evil.”
To many people, these words are from a Bob Marley song, but the truth is these words were said by Hailie Selassie, Emperor of Ethiopia, to the United Nations (UN) Assembly on October 4 1963.
Bob Marley, a pan-African and Rastafarian, composed this song based on His Majesty’s teachings.
Haile Selassie was one of the founding fathers of African independence, together with Kwame Nkrumah and 30 others who met in Addis Ababa on May 25 1963, to form the Organisation of African Unity (OAU).
This included the 17 countries that had become independent from colonialism.
The day marked the African Liberation Day, in which the fore-bearers of African nationalism made a resolve to see the whole of Africa liberated from European colonialism.
Prior to that, on April 15 1958 the first ever pan-African meeting was held by the leaders of Ghana, Egypt, Ethiopia, Liberia, Libya, Morocco, Sudan, Tunisia and the Union of the Peoples of Cameroon.
Twenty-one more African countries gained independence after 1963, only after some protracted liberation wars that cost Africa thousands of her children.
Nelson Mandela was imprisoned for 27 years.
Yet for African nationalists such as Herbert Chitepo, Alfred Nikita Mangena and Chris Hani, among others, they never lived to see the light of independence.
Yet Africa Day is now a day taken so lightly by many people, especially many young people who do not care.
Some would ask: So what?
Others would simply say they do not care about what happened in the past, it was part of history they have no control over.
Others even blame the fore-bearers of African nationalism for liberating Africa.
I spoke to one Zimbabwean guy about African independence in general and he argues that if the great nationalists did not take up arms to liberate Africa, the continent would still have become independent.
He gave me the example of the Civil Rights movement in America and argues the world was slowly warming up to racial equality.
“In the US, the African-Americans did not take up arms to free themselves from American apartheid,” he said.
“They simply engaged in non-violent movement and today the black people of America are free.”
However, he does not mention the daily killings of black young men by white police officers.
Is that freedom, perhaps we should ask?
Here in the UK, I have attended some Africa Liberation Day celebrations held annually by the pan-African Movement, comprising mostly people of African-Caribbean origin.
I joined their movement in 2010 and have been celebrating Africa Liberation Day in the UK from the 1970s.
One of the organisers told me about how their parents (mostly Jamaican immigrants who came to work in the UK in the 1950s and 1960s), used to mobilise resources and send them to Mozambique for ZANLA fighters.
He told me if I go to one of the West Indian centres in Manchester, I can still see the portrait of President Mugabe, which they hung in the late 1970s.
I asked him why they would still celebrate Africa Liberation Day religiously when most people, Africans in particular, do not seem to care about the day anymore.
“They are lost,” he said.
“They are still colonised mentally.”
Maybe he is right.
I have hardly seen any Africans attending any of the Africa Liberation Day celebrations that are usually held in Birmingham every year.
Africa Day must be observed and respected more than any other public holiday in Africa.
At least it should be given the same status as Christmas, because without the visionary of our great leaders and those who sacrificed their lives to liberate Africa, we would still be under colonial rule.
The Aborigines are a good example.
Happy Africa Liberation Day, aka Africa Day, from the Diaspora!