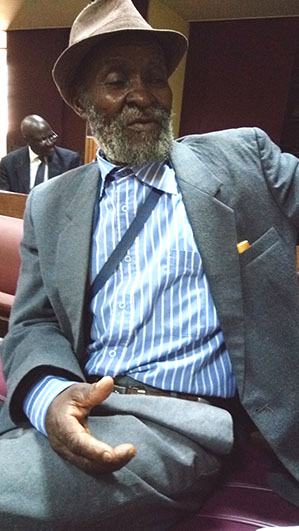 THEY called themselves Rhodesians, a white African tribe, but they were nothing but settlers, invaders.
We did not walk into a Rhodesia that was ill-prepared for war.
In the corridors of power they knew we were coming and had begun to get ready for us.
The winds of change that were sweeping across Africa had put the colonialists on high alert.
For instance in the then Rhodesia, where I stood in early November 1964, pounded by heavy rains, ready to strike, preparations to receive us had already been made by the enemy.
By the early 1950s, Rhodesians embarked on Counter-insurgency (COIN) training with emphasis placed on internal security training for all its military units.
In 1959 the Royal Rhodesian Airforce began acquiring sophisticated aircraft.
In that year, the Rhodesians took delivery of Canberra light bombers and between 1962 and 64 beefed them up with Hawker Hunters and Aloutte 111 helicopters.
Three additional European Territorial battalions were formed and European males aged 18 to 50 were registered for emergency call-up into the Territorial Force.
This did not deter us.
It did not frighten us.
I stood at Bhasera Business Centre in Gutu.
I was on home ground and so familiar with the terrain.
But I was no longer the same village boy, I was a trained guerrilla.
I had received military training in Egypt at Hereopolis Military Training Camp specialising in sabotage engineering.
We were the very first guerillas to infiltrate the country, to carry out a military attack.
I was part of the group that had the likes of Vice-President Emerson Mnangagwa of which we are the only two remaining survivors.
Our mission was to carry out sabotage acts to mark the beginning of war.
We were not fish out of water as the Rhodesians would want to portray because we had begun working with the parents.
My group got into the country through the Chirundu Border Post, to the Rhodesians we were just youths travelling.
The year was 1964 and I was deployed to Gutu, in Masvingo Province.
And that is when I was approached by Solomon Marembo who had come on behalf of the community of Bhasera with a request.
There was a rabid Rhodesian racist businessman nicknamed ‘Makaki’ who had become a thorn in the flesh of the masses.
Marembo supplied me with dynamites and detonators clandenistinely procured from the Shabani and Mashaba Mines sourced from a relative of his who worked at the mine stores.
And in the drizzling weather I headed for the township at Bhasera.
I spent the day checking out the Rhodie’s shop, I got in and bought a soft drink that I leisurely drank as I took mental measurements and checking out the best spots to place the explosives.
The mission would be a spectacular success.
The shop was filled with drums of oil and paraffin.
I was given a bicycle.
It was my ‘getaway vehicle’.
I spent the whole day at the township, a typical village boy who did not raise any suspicions.
When night fell I became the guerilla that I was.
I would not just be hitting the shop.
We had been trained to cause maximum damage.
Thus I headed for the dip tank where I set up and timed the explosives.
And then I cycled back to the shop and placed the explosives in the corners where the drums of paraffin were.
Then I began to furiously cycle away.
I would not be turning back to reset the explosives for I sooner rather than later heard an explosion that rang so loud in my ear that I thought I had not pedalled hard enough to be far away from the township.
But I was far away; it was a spectacularly successful mission.
I crossed the Devure River.
And just before I got to Nyika Business Centre I went to my contact point where I left the bike.
I then walked to Nyika Business Centre where I promptly got a lift to Masvingo.
“Kwakayedza ndatove Masvingo.”
Frantic searches and cordoning off the area were futile, I was long gone.
These were the first acts that signified the beginning of the armed struggle.
Compiled by Evans Mushawevato