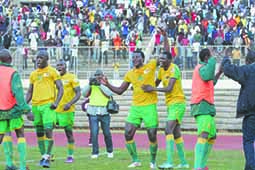 THE Zimbabwe senior men’s soccer team finished the 2014 World Cup campaign winless.
The Warriors were in Group G together with Egypt, Guinea and Mozambique. Egypt qualified for the final stage.

They managed two points from two draws against neighbours Mozambique.
They earned their first point against Mozambique, in Maputo, in a goalless stalemate before the one-all draw at Rufaro Stadium in Harare last Sunday to wind up action of the World Cup qualifiers.
During the campaign, three coaches guided Zimbabwe and neither of the three managed a win.
First the team was under the tutelage of Rahman Gumbo in the home game against Guinea at the National Sports Stadium and lost 0-1 and in Maputo, where they were held to a goalless draw.
After Gumbo, Klaus Dieter Pagels took charge and did not win a match.
Incumbent Warriors gaffer, Ian Gorowa took charge and did not win a match in the World Cup qualifiers.
Although his match was a dead rubber, fans expected that Zimbabwe would finish the World Cup campaign on a high note, winning the last match against minnows Mozambique.
However, the Mozambican team was equal to the task as they forced the home side to a one-all draw.
Several factors affected the Warriors’ pre-match camp while the Mozambicans camped for a fortnight in South Africa.
The Warriors were released by their clubs on Thursday night after playing in the league fixtures.
Hence, fatigue crept in, negatively affecting the Warriors’ performance.
The country’s Premier Soccer League did not suspend matches for the national team although the fixture was recognised by FIFA .
The game was equally important for Zimbabwe’s gaffer as he was looking beyond the World Cup qualifier.
However, Zimbabwe qualified for the third time at the African Nations Championships (CHAN) and the game was important to gauge the locally-based players in preparation for the tournament next January.
Gorowa complained about the way the Zimbabwe Football Association (ZIFA) handled the match.
The former Zimbabwe international threatened to quit the Warriors’ job because of lack of seriousness in the preparations for the game.
Day one of the camp was marred by poor attendance as four players turned out for training at Gwanzura last week.
As a result, the team had limited time to train.
With the CHAN tournament starting in January 2014, ZIFA should start mobilising resources for the team so that it gets ample time to prepare.
Knowing ZIFA over the years, the team may fail to camp in time.
However, the tournament is important for Zimbabwe as the nation is rebuilding the national team.
It will be used to gauge several players as they will graduate into the senior team.
Meanwhile, Gorowa’s charges stunned South Africa in a 2-1 win on Tuesday night in an international friendly in South Africa.
The Warriors were put in the front through Knowledge Musona before Cuthbert Malajila sealed the victory for the visitors.
Zimbabwe and South Africa have met on 13 occasions.
They have both won six times each and drew once.