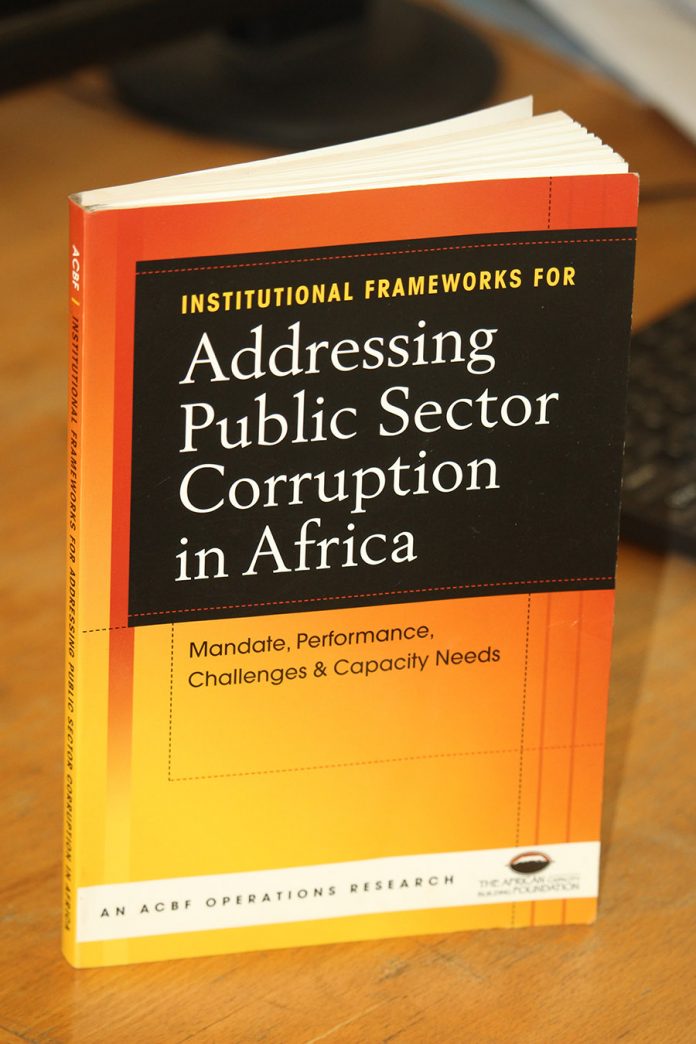 AFRICA is today faced with many cultural, socio-economic and political problems hindering her progress, but one cannot deny that most of Africa’s problems emanate from corruption.

Corruption is proving to be a cancer in most developing societies.

Without the implementation of sterner measures, corruption is likely to destroy nations, leaving future generations with nothing to write home about Africa.

It is often argued corruption can be influenced by various factors and challenges people face within a given society.

Just like other African countries, Zimbabwe has not been spared the scourge of corruption.

In fact, currently, the Zimbabwe Anti-Corruption Commission (ZACC) is investigating over 100 cases.

Titled Institutional Frameworks for Addressing Public Sector Corruption in Africa, the book is a report by the African Capacity Building Foundation (ACBF), an institution established in 1991 in response to the severity of Africa’s capacity needs as well as the challenges of investing in indigenous human capital and institutions in sub-Saharan Africa.

Although printed in 2007, the report reflects on many issues pertaining to corruption which were rampant in the aforementioned three countries but are also being experienced by many African societies today.

The book exposes the challenges faced by governments and institutions in Kenya, Nigeria and Zambia in dealing with corruption.

By coming up with findings and recommendations, the report can be used by African countries in order to come up with desirable change.

Writers of the research concur that corruption does not only cripple the economy of a country but destroys its social operations.

Such an observation shows that even the young who are supposed to learn from elders end up aping the conduct of being corrupt because they are surrounded by corrupt individuals and institutions.

In other words, one might agree that corruption taints the mindset of a generation and destroys trust of the public.

“Corruption is a multi-faceted issue that pervades all aspects of the public and private sectors, and cannot be addressed through legal reforms and enforcements without tackling the underlying causes and incentives for corruption and reducing payoffs (increasing the cost of corruption) to the individual.

It undermines the rule of law, sound governance and competitive business transactions, distorts social and human values and raises political and moral concerns,” reads the report.

The report also brings to light important observations on the repercussions of corruption in society.

It (corruption) flourishes where institutions are weak and where employees are underpaid or go for ages without salaries.

Revealing corruption in Nigeria, the report reads: “Corruption seems to have become the rule rather than the exception as a precondition for performance of official duties.

Administratively, the salaries of police officers remained unpaid for several months, thus compelling its members to borrow for their survival.

The officers reverted to their old corrupt behaviour and extortion of money from the citizenry resurfaced.”

The argument in this instance is that apart from greed, a person abuses ‘public power’ for private gain because he/she decides to unlawfully ‘borrow’ for survival.

For Kenya, the report asserts that corruption is both active in public and private sectors, meaning it is a ‘two-way street’.

Although there were measures of coming up with anti-corruption initiatives, the unit faced constraints of lack of political will and support, as well as the mandate to prosecute.

According to the report, corruption appears to be one of the most chronic macro-economic problems confronting most African countries today.

It remains the root cause of various economic and political crises that have plagued Africa and continues to worsen not only the problem of underdevelopment, but that of abject poverty of citizens.

Despite many African countries coming up with initiatives to curb corruption, many Africans become helpless while some desert their continent, becoming immigrants in foreign lands, particularly the West.

However, recommendations provided in the report posit that if institutions and governments implement them, the menace of corruption can be reduced in Africa.

Some of the recommendations include ensuring public education, channelling more resources to high-profile cases with a view to demonstrating the government’s seriousness in fighting corruption and incorporating anti-corruption issues into the educational curricula at all levels, from primary to tertiary.

No doubt corruption is a major stumbling block in Africa, but if governments fully commit themselves to fight the scourge, the continent will prosper.