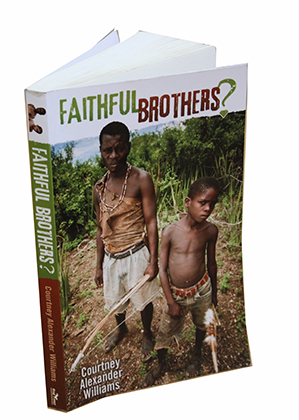 THE book Faithful Brothers penned by Courtney Alexander Williams is an attempt to demystify the perception that America holds the answer to the challenges faced by Africans.
Set in Senegal, the book revolves around Abdalla Ndao, a young boy whose dream is to study film in America.
Abdalla, the eldest in a family of five, has a young brother Chijioke and three sisters Abimbola, Amia and Aba.
His parents are Issa and Suma.
Abdalla and Chijioke, typical of the African colonialism created believed that their dreams would only be realised in America where ‘everyone was rich.’
The two lads envy those living in America.
Abdalla’s parents had managed to fend for their family from farming.
The story is set at a time missionaries were still penetrating into Senegal with the aim of spreading Christianity to the Africans.
Williams explores how the African family unit disintegrated following the arrival of the missionaries.
Not only had the white missionaries come to spread Christianity, they changed the way of life for the Africans making them leave behind part of their culture.
By so doing the whiteman was creating a confused African who is not sure who he is because he has been stripped of his sense of belonging.
Africans had their own religion which the missionaries ensured they demonised and made the African despise in order to adopt theirs.
Before the arrival of the missionaries, Williams explains how the families used to share a piece of land with the husband building houses for his several wives in the second compound.
Male children after marrying were given land to build houses in the same compound as the parents.
However, the whiteman had come as Williams explains and discouraged polygamy and people were moved from their land and in the process families became scattered.
The ‘turning point’ in Abdalla’s life is when a John Easton, a white missionary based in New York, visits their local church.
Abdalla shares his dream of one day studying in America with John who promises to assist him.
Indeed John proves to be the answer to Abdalla’s prayers as he assists him to get a place at New York University.
It was after his move to New York when Abdalla had a rude awakening from his deep slumber as he realised that life was not all rosy in America.
In order for him to sustain his stay in New York, Abdalla took up part time jobs as a doorman, telemarketer and busboy.
Abdalla, like most Africans who have left home in search for greener pastures in America, is disappointed to realise not everyone is rich in America.
Back home Abdalla’s father is arrested for standing up against the white regime.
Chijioke on the other hand smuggles diamonds to New York where he sells them to a whiteman Feury, a drug dealer who introduces him to his way of life.
Unlike Abdalla who wants to work for his riches, Chijioke believes in quick money.
As the saying goes easy come easy go, Chijioke’s days of partying in New York come to an abrupt end when his investments fail to fall through and he is left bankrupt.
Abdalla fortunately finishes his studies and with the help of Feury produces an award winning movie.
With the help of Feury, Abdalla moves his family to New York.
Once again the whiteman is portrayed as the hero in an African man’s life.
Ironically it is the same white man who caused problems in Abdalla’s life had his family not been displaced from the land and their diamonds seized his family would not be wallowing in poverty.
It is time the African realises that he is capable of bringing solutions to his challenges and should not wait upon the white man.
The truth is most of Africa’s current problems are created by the West.