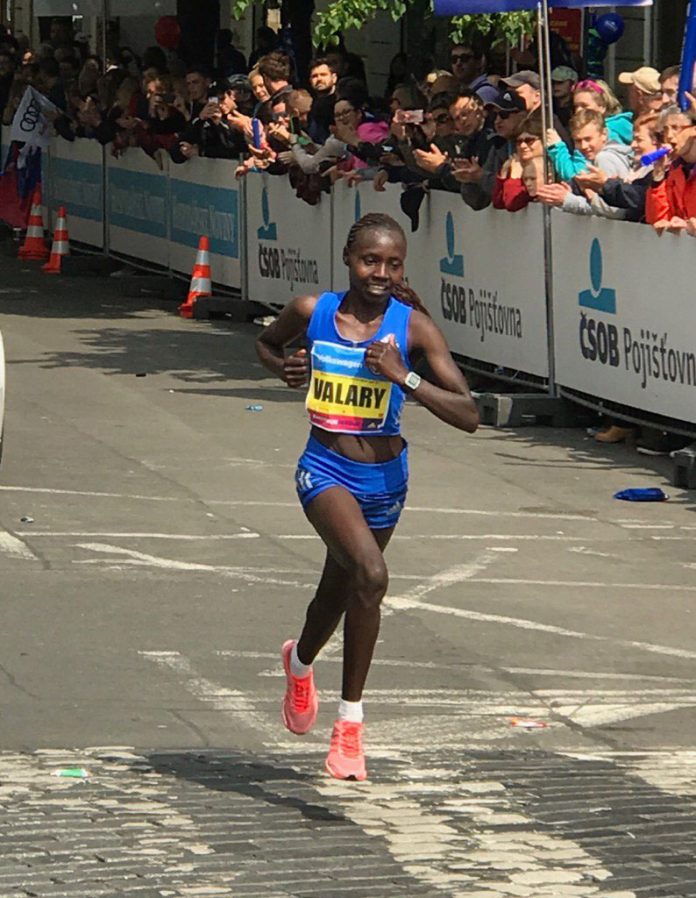 Aiyabei clocked two hours, 19 minutes and 10 seconds to smash the course record of 2:20:36 held by Meskerem Assefa, in the process becoming the first woman to run sub-2:20 in Frankfurt.

Aiyabei’s time is the fifth fastest this season. She beat Ethiopians Megertu Alemu (2:21:00) and Meskerem Assefa (2:22:01) who came in second and third respectively. Assefa had returned to defend her title but couldn’t match Aiyabei’s pace.

The athlete, who trains in Iten, Elgeyo Marakwet County, broke from the pack in the early stages of the race where her husband, Kenneth Kiplagat, was among the pacemakers.

“She has done us proud and this is because we had prepared well because of the competitive field. Our target was for her to run sub-2:20 and we are happy she managed to do it,” Kiplagat told Nation Sport on the phone from Germany.

It was clean sweep for Ethiopia in the men’s category with Fikre Bekele winning in 2:07:08 ahead of compatriot Dawit Arega who timed 2:07:10 while Aweke Ayalew sealed the podium in 2:07:12.

Martin Kosgey, from Kenya, came in fourth place despite a spirited fight before he was dropped in the last kilometre in a sprint finish.

In the Venice Marathon, Judith Korir — who trains in Kapsait Athletics Training Camp in Elgeyo Marakwet — won the race in 2:29:20, beating compatriot Cynthia Cherop who clocked 2:31:33 to second place while Meka Wake Washo from Ethiopia was third in 2:34:36. — Daily Nation

Korir, who trains with World Record holder Brigid Kosgei, said she was inspired by her role model to win the race.

“It was a tough race, but after Kosgei won in Chicago Marathon setting a new world record, it gave me more energy to win the race,” said Korir.

In the men’s category, Ethiopia’s Lencho Tesfaye ruined Kenya’s party by winning in 2:10:49 ahead of Kapsait-based Henry Kiprop who clocked 2:10:55 while Andrew Kimtai settled for third in 2:11:58.

In the women’s category, Senbere Tefere, from Ethiopia, clocked 65:32, beating the Netherlands’ Sifan Hassan, who timed 65:53 while Kenya’s Joan Melly was third in 66:10. — Daily Nation