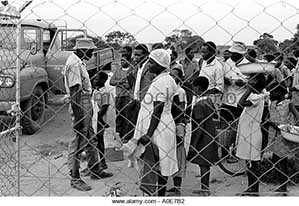 THE story of Protected Villages or ‘Keeps’ in Rhodesia began with the outbreak of the war in 1972.
On December 22 1972, a section of ZANLA guerillas attacked a farm called Altena in Centenary owned by Marc De-Borchgrave, popularly known as ‘Maka’.
Before attacking Maka’s farm, the guerillas had planted landmines on the roads leading to the farm and one of them was detonated by a Rhodesian military vehicle and killing one of their men.
The day after, Rhodesian security forces stormed the villages around, such as Chawarura and Mhene.
The people from the villages were taken to St Albert’s Mission. Their animals were left to roam the countryside. Most of the cattle were impounded and slaughtered by the soldiers.
At St Albert’s, everyone was ordered to get into a security fence where there were no toilets or shelter.
They lived and slept in the open.
Many people argue that this enclosure at St Albert’s was the first Protected Village or ‘Keep’ in Rhodesia.
The concept of Protected Villages was developed by the British in Malaya, Kenya and much later by the Americans in Vietnam.
In Mozambique, during their war against the Portuguese, the people were put in ‘aldementos’.
Because there were no toilets at St Albert’s, every morning armed soldiers would order the women to collect with their bare hands the human faeces dropped overnight into plastic bags. The bags would then be deposited in a pit that was dug just outside the fence.
St Albert’s turned out to be temporary as the villagers were moved to Gutsa in Muzarabani on the Zambezi Valley floor.
From Muzarabani the story of the ‘Keeps’ shifted to Chiweshe Tribal Trust Land.
The very first ZANLA section to carry out operations in Chiweshe was one led by Jack Chamunorwa.
After the attack at Altena Farm, Jack Chamunora and his section entered Chiweshe for operations.
One day, they came to a rocky outcrop a short distance from Nzvimbo Township.
They were joined by a ‘mujibha’ named Ellison Mabhoyi who lived in a nearby village of Karome.
The village is a short distance from Nzvimbo Growth Point.
Jack Chamunorwa moved around with Mabhoyi and then one day pitched camp on Gonhi Hill while Mabhoyi left for home.
Unfortunately for Mabhoyi, plain clothes policemen awaited him; he had been sold out.
The police tortured him until he indicated where Jack Chamunorwa and his section were. The Rhodesian soldiers went and laid an ambush at the foot of the hill.
Early the next morning, Jack Chamunorwa descended the hill to get into the villages and walked straight into the ambush.
Jack and Marange fell in that ambush.
Two of the enemy soldiers were also killed.
However, when a third of the freedom fighters fell, the man who had taken over command ordered a retreat over Gonhi Hill and into the white commercial farms in Umvukwes.
The contact was the first ZANLA battle in Chiweshe and it triggered trouble in Chiweshe. Chiweshe was totally surrounded by white farms and the Rhodesians acted quickly to control the situation.
All the people they thought influential were picked up, such as one spirit medium known as Chiumbe, whose real name was Sami Mubaiwa.
A man called Hosiah Chaka, a nationalist, and a chief called Makope Pheneas Mhandu were also picked up.
These people were taken to Concession Police Station where Chiumbe and Hosiah Chaka were beaten to death in a nearby forest nicknamed Gochibvama – the place of torture.
Pheneas Mhandu, the chief, was lucky and taken to Hwahwa near Gweru.
Because Chiweshe was very close to white farms, the movement of people into ‘Keeps’ was done swiftly and methodically, but with the same ruthlessness of St Albert’s.
The first toilet people used when they got into ‘Keeps’ was a tin with water inside it. Overnight one was expected to use the water in the tin and the next day the water and the faeces were thrown away.
‘Keeps’ in Chiweshe were built in quick succession starting from the north at Chaona to the south at Gweshe.
The massive movement of people into ‘Keeps’ brought about a lot of suffering and bitterness.
The authorities supplied nothing like soap and medicines and the little stores that were set up were poorly stocked because of the war.
Overcrowding was the norm and there were disease outbreaks.
Typhoid and diarrhoea were rampant. Malnutrition and starvation took a heavy toll on children because people could not go to the fields to grow crops.
Then women suffered another calamity — rape.
Soldiers from the Internal Affairs Department and the District Assistants raped them.
The story of ‘Keeps’ cannot be complete without mentioning the other Protected Villages that were built around the country as the war escalated.
They were Concentration Camps.
If the Protected Villages were intended to stop the war, they failed because the war was won. The guerillas occasionally attacked these PVs.