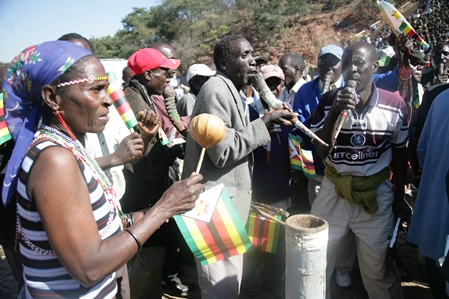 Biographical background of the author
FOR a start, you may be interested to know that Professor Emmanuel A. Ngara is currently the chief executive officer of the Zimbabwe Council for Higher Education (ZIMCHE).
Born on December 24 1947 in Mhondoro (Zimbabwe), he was educated at St Ignatius College, Chishawasha, and proceeded to study at the then University of Rhodesia (now University of Zimbabwe). He then went to study for his Masters and PhD at the University of London before returning to become a professor of English at the University of Zimbabwe in the early 1980s. There he rose to the position of Pro-Vice Chancellor.
His other brilliant achievements are in the administrative and diplomatic services. Professor Ngara served as Zimbabwe’s deputy ambassador to Ethiopia following which he re-joined the familiar turf of academia with a stint to Lesotho and South Africa.
In the latter, he served as Pro-Vice Chancellor of the University of Fort Hare and the University of Kwazulu-Natal, respectively. Note, however, that throughout these missions he continued to write both fiction and critical work on literature, history, philosophy and education in general.
And of course he has also distinguished himself as a poet. The anthology before you today, Songs from the Temple, testifies to this other remarkable feat.
Reflections on the title of the anthology
Last week I gave you some hints on how to approach poetry written in free verse. That was in preparation for our new journey into Ngara’s anthology, Songs from the Temple.
Two words in the title are central to our initial understanding of the thematic thrust of this anthology. These are ‘songs’ and ‘temple’, respectively.
Both speak to the discourse of the African literary genre. In fact, African tradition is expressed through many different art forms, such as music, dance, art, sculpture and beadwork.
Songs occupy a fundamental position in the African oral tradition. They carry the communal emotion as well as the communal institutional memory.
Songs are highly cerebral too, allowing access to a whole range of psychological contours, valleys and plateaus. Songs carry culture; they entertain, teach and liberate in all their forms.
Naturally, singing is very important to the African society because the melody and rhythm follow the intonation of the song text. The songs are often sung in call-and-response form.
In West Africa, a griot is a praise singer or poet who possesses a repository of oral tradition passed down from generation to generation.
Griots must know the traditional songs and must also be able to improvise songs about current events and chance incidents.
Oral tradition is very important in African culture and philosophy as it ensures the passage of cultural practices from one generation to another.
Music is a form of communication and it plays a functional role in the African society. Songs accompany marriages, births, rites of passage, hunting and even political activities. Music is often used in different African cultures to ward off evil spirits and to pay respects to good spirits and ancestors; and above all to celebrate life.
Although the musical styles and instruments vary from region to region, there are some common forms of musical expression.
The most significant instrument in African music is the African drum. It expresses the mood of the people and evokes emotion.
The beat of the African drum is the ‘heartbeat of the community’ and its rhythm is what holds the dancers together.
Yes, dance is an integral part of the African culture. It utilises symbolic gestures, masks, costumes, body painting and props to communicate.
The dance movements can be simple or complex with intricate actions including fast rotation, ripples of the body and contraction and release.
Dance is used to express emotion, whether joyful or sorrowful and it is not limited to just the dancers. Often spectators are encouraged to join in in the communal spirit.
You are perhaps familiar with ‘songs that won the liberation war’, I hope. Through them the story of foreign domination is told. And through them a new consciousness of liberation is written and driven to usher in a new era.
Such is the power of songs, the people’s songs. People always define themselves through ‘songs’. They help manifest a people’s culture, which itself is an art of liberation, as Cabral says.
‘Temple’, on the other hand, invokes images of worship. In the Christian and Jewish Bible, the concept is associated with the presence of cosmic force/energy.
While the temple certainly has a history and integrity of its own, it was created by extension of the tabernacle and is associated with such diverse topics as a mountain and a city, the cosmos and a person’s body, as well as God’s glory and name. T
he biblical authors from Moses through Ezekiel and Haggai to John of Patmos never describe a complete temple, but offer a vision of what the temple was to be: the locus of the presence of God.
In African religion too, the temple is an earthly abode of the gods. It forms the physical link to the spiritual realm. The images associated with this temple testify for themselves which temple is the source of the songs here contained.
The cover design of this anthology graphically captures the sphinx, the pyramids, the Zimbabwe bird and the Great Zimbabwe Monuments, which emblems tell the African story.
These are all symbols of African religion in which we find the logic of African history, African civilisation and African identity.
Interpreted against the history of foreign domination, these icons represent defiance, resistance and commitment to self-determination. The poems in this anthology speak to this cause. Watch out for the detailed analysis in the forthcoming instalments.