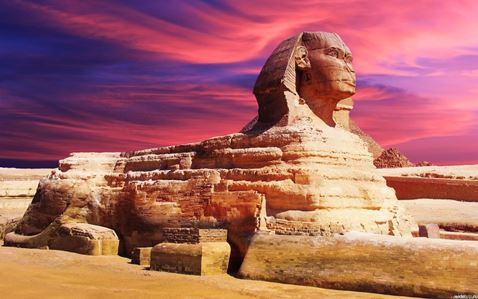 THIS Sequence is appropriately titled, ‘The Rhythm of Pyramid Drums’; thus paving way for the stylistic and thematic concerns of art which is decidedly Africa-centred in character and sensibility.
You will remember that the last poem in the first sequence is a prayer for a bumper harvest of imaginative inspiration to chart a new way of the rebirth of African consciousness.
This sequence demonstrates the outpourings of this re-invented, re-tooled and re-invigorated African mindset.
Once the artistic vision has been appropriately aligned, it is logical that its first port of call is Egypt, the origin of African and, indeed, world civilisation.
The opening poem in this sequence is entitled: ‘The Awakening of the Sphinx’, a direct reference to the ‘Great Sphinx at Giza’.
It is a monumental symbol of ancient Egyptian kingship designed in line with ancient Egyptian solar worship.
You need to be informed that in ancient Egypt, the Sun was revered as a symbol of universal divine energy which illuminated the entire cosmos and touched everything.
It is itself the grand symbol which also testifies to the unparalleled architectural prowess of our great ancestors.
There were 22 of such statues of lesser size, but the largest of all is the Great Sphinx at Giza near Cairo.
It remains unique for both its size and the fact it was hewn directly from the living rock, the rock that symbolised strength, endurance and eternity; yes, the rock being a canonical symbol of the African ideological character as equally espoused by the Great Zimbabwe stone-work from which Zimbabwe derives its name as well as cultural and spiritual fortitude.
The Sphinx remains a classic image of African kingship throughout Egypt’s ancient history.
This is a fact which foreigners have tried to keep in doubt by creating the impression that its creators are hard to fathom, which conspiracy is betrayed by their deliberate attempt to deny its true identity by knocking off the flat African nose which clearly resembled the identity of its constructor.
The fact that this earliest super-colossal image of the king was a mixed form, both animal and human, is significant.
The head conveys the essential identity and with the scarf about the Great Sphinx’s head, it is the representation of a king.
The attachment to the lion’s body suggests the organic relationship between the physical being of the king, which is discernibly human and the royal spirituality of the gods whereupon the king is the intermediary between the mortal and the immortal.
Such a physical-spiritual, human-royal metamorphosis is appropriate to the king who is, uniquely, the link between mankind and the gods and stands constantly on the threshold of these two worlds as both a royal and pristine figure.
Properly understood in African worldview, a king is accountable to both the people and to the gods.
When the poet makes reference to the ‘awakening of the sphinx’, he is therefore implying that such a kingly role has been stalled by forces of oppression which now give way to its resurrection.
This poem is therefore a celebration of that revolutionary renaissance: “I saw the shape with lion body and the head of a man/rising from its centuries of silent sleep as the lord of the Nile,” the river that gives the world its first civilisation.
Indeed that creative instinct had long been stalled by imperialist forces, but the poet dreams of the resuscitation of that illuminating role.
The instructive role of history in the African renaissance is sufficiently elucidated.
History itself is redefined, not as ‘a yearning for the primitive past/and the age of the shaduf’, but as a process in which the past is a compass for the future (‘for he who knows not yesterday knows not today’).
The rise of the Nile is therefore a necessary inspirational force to drive Africa’s technological and spiritual renaissance – the present generation must be fired by the achievements of their forefathers to ‘blind the trespassing beholder (and) break asunder these chains/That hold (the African) race in bondage and servitude.”
This bondage is historical as mirrored in slavery, colonialism and neo-colonialism. These are processes that have had a devastating toll on African alienation at various levels: historical, psychological, cultural, spiritual, economic and intellectual.
For the poet, any re-birth should follow reversal of the psychical conditioning brought about by the above alienating processes.
And as Achebe points out, this re-alignment can only come through a systematic re-tracing of ‘where the rain began to beat us’.
This is what the poet does in the poem, ‘A Hymn to Unas, King of Egypt’.
Unas was an Ancient Egyptian Pharaoh, the ninth and last ruler of the Fifth Dynasty during the Old Kingdom period (2465–c. 2325 BCE) of ancient Egypt and the first pharaoh to inscribe the interior of his pyramid at Ṣaqqārah with religious and magical texts known as Pyramid Texts.
According to later kings lists, Unas was the last ruler of the Fifth Dynasty, but the innovations in his pyramid complex and the use of blocks from his predecessor’s monuments in his own pyramid have led some to consider him the founder of the Sixth D (circa 2325 – circa 2150 BCE), or at least a transitional ruler, a characteristic central to the poet’s historical allusion.
He symbolises that transitional capacity which is the responsibility of modern pan-Africanists – to make use of Africa’s history in the conscious re-making of the modern world, in the invocative injunction: “Arise Unas and rule your land/forget not the heroes that sprang/from your loins:/Sundiata … / Mutapa … / And Shaka … / Arise now and bring forth men and women of clear vision/ … with a new voice.”
The poet is obviously praying for a new generation of Africans inspired by history and driven by African philosophy to rescue fellow Africans from intellectual myopia and ready to champion the new call of African think tanks (intelligentsia) that seek to ‘banish the bane of hunger, strife and servitude’ through indigenisation and local empowerment initiatives.
Without spiritual and material regeneration, Africa will remain in the claws of predators and destroyers.