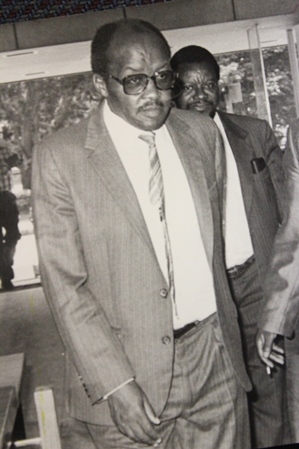 ON June 4, 2014 a dark cloud hung over the country when Zimbabwe lost one of its illustrious sons of the soil, Dr Nathan Shamuyarira.
The former ZANU PF Politburo member and former Cabinet minister died aged 85 at West End Clinic after a long illness.
The Patriot tracked down some of the people that worked closely with Dr Shamuyarira before and after the liberation struggle.
Cde Don Muvhuti based at the ZANU PF Headquarters, Harare: “I started working with the late Dr Shamuyarira when we were based in Mozambique during the liberation struggle.
“Initially Dr Shamuyarira was a lecturer at Dar-es-Salam University and we called him to join the liberation struggle full time.
“He came to join as the Director of Administration of the struggle and we worked side by side as I was the deputy secretary for administration.
“Dr Shamuyarira was a professional person who had excellent relations with those he worked with and it remained like that till the end of the struggle.
“After the country attained its independence and we came back to Zimbabwe we parted ways with Dr Shamuyarira who became a member of the Government and I remained working full time for the party.
“When he was appointed ZANU PF Secretary for Information and Publicity, I had a chance to work with him again as I was also moved to the information department.
“When I joined the department, Dr Shamuyarira was working on the People’s Voice Newspaper and I decided to involve myself in the project and this gave me another opportunity to work closely with him.
“He freely imparted knowledge about the media industry to people like me who were still learning the ropes.
“The nation has suffered a great loss.
“He had the party and country at heart.
“Dr Shamuyarira worked tirelessly to ensure that ZANU PF remained a people’s party.”
Cde Gadzira Gadzira-Chirumanzu: “I started working with the late Dr Shamuyarira when I was based in South Africa and he was the ZANU PF Secretary for Information and Publicity.
“During the build-up to the 2008 harmonised elections, I used to engage in debates on behalf of the party with members from the opposition party MDC.
“As per the ZANU PF policy which requires members not to say things they are not sure of but to speak from informed sources, I used to contact the late Dr Shamuyarira to get the party’s position before these debates.
“It was during this time I learnt that he was a person who was not stingy with information as he made sure that whatever I asked him he explained fully.
“His advice enabled me to debate in a way that enabled me to change the thinking of many Zimbabweans who were living in South Africa.
“Many including South Africans realised after the debates that the picture the “MDC was painting about Zimbabwe was false.
“The late Dr Shamuyarira was a humble man who accommodated everyone irrespective of their status.
“I would like to thank him for the work that he did not only for the party, but for the country.
“He sacrificed his life when he joined the liberation struggle because with his level of education, he could have had a job anywhere in the world, but he chose to fight for his country.
“He understood what it meant to be Zimbabwean.
“It is important that the young crop of ZANU PF cadres and other youths take a leaf from the late Dr Shamuyarira.”
Dr Shamuyarira joined the political arena in 1962 when he joined ZAPU.
When political differences emerged among the ZAPU leadership, he joined other nationalists to form ZANU.
In September 1964 he left the then Rhodesia to study at the Princeton University in the United States.
He relocated to Mozambique from Tanzania in 1977 to take part in the liberation struggle.
Upon arrival he was appointed Director for Administration before being appointed Deputy Secretary for Information and Publicity in 1978.
After independence Dr Shamuyarira served in various leadership positions in the ZANU PF party and in Government.