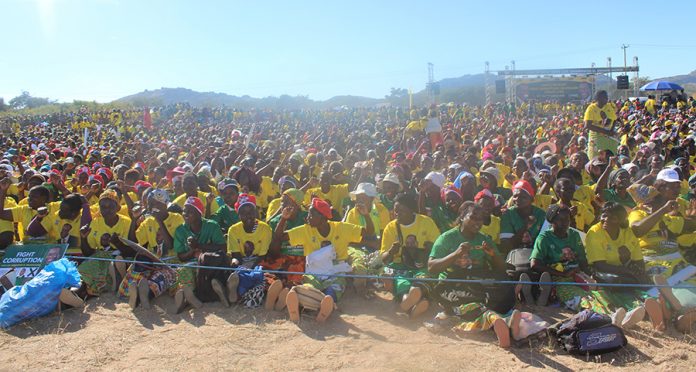 ZANU PF stormed to victory once again.
It’s a spectacular victory and patriotic Zimbabweans are ecstatic. This is not surprising because that’s the way it works.
If you do something precious, something great, people will recognise and reward.
This is the sole reason ZANU PF has won elections since 1980.
It had, and still has, an unmistakable message – Zimbabwe ndeyedu.
Let us fight and rebuild Zimbabwe because others are determined to hand it over back to the British.
For 30 pieces of silver, they will kill and destroy to achieve this evil goal.
The people of Zimbabwe agreed with ZANU and ZAPU during the liberation struggle that the whiteman must be driven out of their land, hence they fought side-by-side to free their country.
Our people have not forgotten that they were worthless beings to the whiteman until ZANU and ZAPU liberated the country, with their assistance.
In 1980, the people said ‘welcome home and thank you’ to the liberation forces.
In the subsequent elections, they awarded them powers of rulership and started the process of rebuilding the country.
The liberation of our country was the greatest achievement of our people and our people have never forgotten how that came about.
It did not come from Britain.
It must be noted that before independence, there was no democracy and human rights for Africans.
These were instituted only after independence.
Our people have not forgotten that they had no right to vote to decide their destiny.
Our people have not forgotten university education was the preserve of a few elites but the liberation forces Government made it universal.
After independence, each child could go to school free for decades while primary and secondary schools were brought within reach of each child.
Health services were also made universal.
The whiteman had only educated those he could co-opt.
The rest were relegated to the pool of reserve labour.
Our people have not forgotten that they had no land during colonisation.
They had to eke out a living on barren lands, while the whiteman had hundreds, if not thousands, of fertile hectares at his disposal.
The African was only a labourer in the land of his birth.
Our people have not forgotten mining was the preserve of the whiteman and his relatives and the proceeds were theirs exclusively.
However, today blacks are free to mine in their own right.
Our people are now free to own and run own companies.
That was not so under colonialism.
Our people have not forgotten how all this came about.
ZANU PF fought for this transformation under extremely hostile conditions to the extent that the former colonisers started a party, the MDC, to dislodge ZANU PF because all these vestiges of colonialism were being removed.
Land had been returned to blacks and they were increasingly getting into ownership of their resources.
ZANU PF was democratising Zimbabwe and opening access for the majority to economic political and social resources.
For this reason, the whiteman instituted sanctions against Zimbabwe for refusing to continue to live under British subjugation.
They even planned to invade our land again as they did in 1890, but South Africans refused to assist white foreigners to destroy their own African brothers.
From the moment MDC was formed, the British and their European kin perfected the imperialist song, but sung with an African accent: ‘If MDC has not won, someone has cheated, someone has intimidated people.’
The MDC was also trained to use violence to remove ZANU PF from power.
They were trained to create chaos in order to justify intervention by foreigners.
In the run-up to the 2018 elections, something interesting was taking place.
It was said: “ZANU PF could no longer cheat or intimidate its way to victory” because there were international observers in the country and there was a new Constitution.
There was so much hype, especially in urban areas, that MDC would make it.
They celebrated days before the casting of votes.
The excitement continued after voting.
Voting had been free and fair, they were happy.
There was so much positive feeling they had made it, until the results were announced, then the song changed – ‘voting had not been free and fair.’
The MDC Alliance cried foul, claiming rural people had been intimidated, but then the observers had said it was a free and fair election.
The true colours of MDC erupted in the worst form of hooliganism and thuggery.
They destroyed property, especially in Harare, while their leaders promised to make the country ungovernable.
Then one recognises the same old song of the MDC paymasters, the British, their Europeans and American friends – that rural folk were passive pawns in the hands of the ‘terrorists’ (freedom fighters).
It is however tragic when people refuse to acknowledge their self-worthiness because their former colonisers give them money.
Our people achieved something great.
They liberated themselves and have governed themselves for the last 38 years under great vicissitudes.
We are still building Zimbabwe and there still is so much to be done.
In that regard, the British and the Americans should be the last to say anything about how we govern ourselves because, historically, they buried us alive and we dug ourselves out without their assistance.
We rose from the ashes of napalm which they poured on us.
No amount of vilification can dissolve ZANU PF into nothingness because it is the rock on which Zimbabwe is built.
It has been winning elections from 1980 to 2018 because it holds Zimbabwe to its bosom.
It is the ultimate defender of the interests of the people of Zimbabwe and no amount of whitewashing can change the fact that the MDC was born of violence — it’s in their DNA.