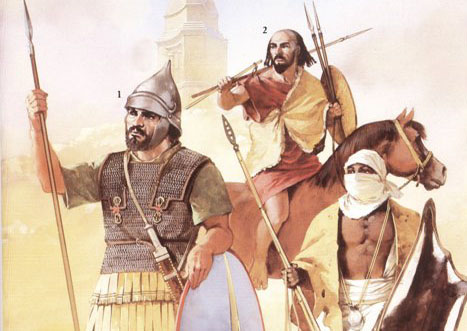 THE Romans, speaking of one of their slaves, who happened to be a Garamantian, described him as ‘black as pitch’.

The Garamantes had a sub-tribe called the Tedamansii who lived south of the Syrtis.

They claimed to be descendants of the earth-born Garama.

The Garamantes, named after their capital, were spread to Lake Nouba.

One of the Ptolemies also described the Garamantes as ‘somewhat black’ and ‘more likely Ethiopians’ rather than of Libyan origin. Such descriptions correlate well with the skeletal remains of the Garamantian area.

They had been called, by Tacitus, invincible.

They were involved in the trade in salt and gold across the Sahara and their trading extended far to the east in Nubia and to the Carthaginian area and far to the North in Tunisia.

According to Robert Graves, the Garamantes were established in the Djado Oasis in Niger from an early period as well. Transsaharan trading contacts of the Carthaginians were carried on through the Garamantes who occupied oases connecting the most direct route between their brethren, the Nasamones, to the North and Central Africa. (The Nasamones and Garamantes were both said to be descendants of the same eponymic ancestor Garamas)

The names of the sub-tribes of the Libyans called Garamantes, who occupied the kingdom of Germa and whom Ptolemy II suspected to be Ethiopians, recalls the names of the modern Zaghawa peoples called Teda and Garawan or Goran.

The Nilo-Saharan speakers called Teda, Garawa or Zaghawa, called ahel Gara by the Tuareg, are found in desolate comers of the Sahara.

They have a homogeneous, unique, physical type, similar manners and customs, social attitudes and gestures.

They inhabit many of the oases in the southern Sahara, including Uweinat, Kufra, the Kawar and Tibetsi the northern parts of Chad and Sudan, and are accustomed to raiding and trading over great distances.

They seem to be the remnant of the ancient Ethiopian peoples extending between Fezzan and the Nubian kingdoms, who, in the desert were called Trogodytes, and who, as town dwellers, founded the town of Germa or Garama, which in the Teda-Kanuri dialects means place of the Gara.

It is plausible that the name of the town and kingdom of Kerma was an earlier form of the word.

The Zaghawa or Teda dialects are closely related to that of the modem day Kanuri, who are partially Teda in origin.

Recently, a J. Sharman has pointed to some ‘interesting correspondences’ between ancient Meroitic and Kanuri languages. These people, after the destruction of the kingdom of the Garamantes, had founded the kingdom of the Zaghawa, next to the Nobataean Kingdom of Nubia.

It is known that the ancient Nouba, or Nobatae who are probably ancestral to modern Nilo-Saharan speakers, still called Noba, living in southern Egypt and Northern Sudan (not to be confused with the Nuba of the Kordofan hills) were descendants of ancient people of the Kharga oasis in modern-day Egypt.

The Annoubades or Noba were imported into Ethiopia or Nubia from the Kharga Oasis to check the movements of the nomads called Blemmyes (Bedja) in the time of the Byzantine control of Nubia.

According to Silius Italicus, they were a race ‘blackened by the sun’.

As mentioned by Robert Graves, the Garamantes were considered to be a Kushite Berber people.

We know the Garamantes traded in precious stones or carbuncles with the peoples of ancient Ethiopia (Nubia).

The type of cist burial found in ancient Garamantian towns of the Fezzan, which are the most ancient cairn type found and spread throughout the Northern Sahara, are associated with roughly ‘hollowed stone bowls reminiscent of those of the south-eastern Sahara’.

Hundreds of foggaras have been found in the area of Wadi El Agial, testifying to their skill in hydraulics.

Pyramids that are typical of the Meroitic tumulii were also built.

The Roman General Balbus, in 19 BC, conquered the tribe.

In the Second Century AD, a group among the Levathes (Luwata) which had been a perpetual menace to the Roman Empire in Africa, invaded the Garamantian territory and subdued the indigenes of Germa, forming a confederation called Zenata. Zenata included the Garawa or Magherawa, the Luwata called Ifuraces (Afer) and Meknes.

By the 600s AD, the populations from Germa or Jerma — the Magherawa or Jerawa in Arab histories — were scattered in posts from Libya to Algeria including the Gharian, the Wargla oasis and the foot of the Aures.

In the 7th Century AD, the Arabs came into contact with the Garawa, in the region of the Aures Mountains in northern Algeria, who were a subject tribe of the Levathes.

According to one writer, in the Berber world there were several famous examples of supreme authority being attributed to a holy woman.

One of the most famous stories is that of a queen of the Magherawa named Dia or Daya Kahena who organised her people to stop the penetration of the Saracen Arabs.

She was said to be the mother or a close relative of a General Kaiseila of the Luwata in Mauretania (present day Algeria).

He was able to drive the Mohammedan Arabs north into Tripolitania (in Libya).

Later, the Saracens succeeded in converting some of the Maures to the laws of Mohammed.

The relative of the Dia Kahina was one of the converted who participated in the conquest of Spain in the year 711 AD with his people.

This was after the Dia had been killed in battle by the Arabs.

These peoples, therefore, were the first of the ‘Moors’ to enter Europe and were peoples closely related to the Garamantes and Levathes or Mauri — the Nilo-saharans and the Tuarek.

They ruled as far as the Pyrenees and parts of southern France. About seven years after the capture of Gibraltar or Gebel el Tarik, they invaded France, taking Marseilles and Arles in the 800s, capturing Sicily in 837 and seizing Rome in 846.

They dominated parts of southern Italy for years.

A famous semi-historical French epic written in 1100, the ‘Song of Roland’, describing this invasion, calls them a people ‘blacker than ink’.

They remained in France on the western Riviera in the town of Camarque, still known as La Petite Afrique or Little Africa.

Sir Morien, the Moorish knight, is described ‘as blacker than any son of man a Christian had ever beheld’.

The Africans were joined also by some of the Ummayad Arabs in north Africa and were overtaken only in the 11th Century by another Moorish dynasty of Tuarek origin called Al Murabatin or Almoravids.

Remainders of these Zenata, north of the Sahara, still live in Algeria (they are described by one author as a people as ‘black as negroes’).

They also dwell in the Gharian part of Libya, while other Kel Faruwan or Iforas Tuareg live in Algeria and Niger.

The peoples of Jerma or Garama, known as the Jerawa in Arab records of the 6th Century, had also been migrating, after the invasions of the Vandals and Levathes in Fezzan, into the Sahel and Sudan areas where they later were known as the Ahel Gara, Wangarawa and Garawa’an and, even to this day, as the Teda are called Gora’an.

The names of the indigenous Nilo-Saharan peoples of the areas directly south of Fezzan today correspond to the names of the ancient tribes of the Fezzan called Tedamansii, Gamphasantes and Garawa.

We find tribes in the area of the ancient Zaghawa lands of Bornu and Kanem by the name of Gam of the Kanuri, Gara and Teda. Some of the Zaghawa are called Anu Saman by the Tuarek which Richmond Palmer connects with the name of the Nasamones.